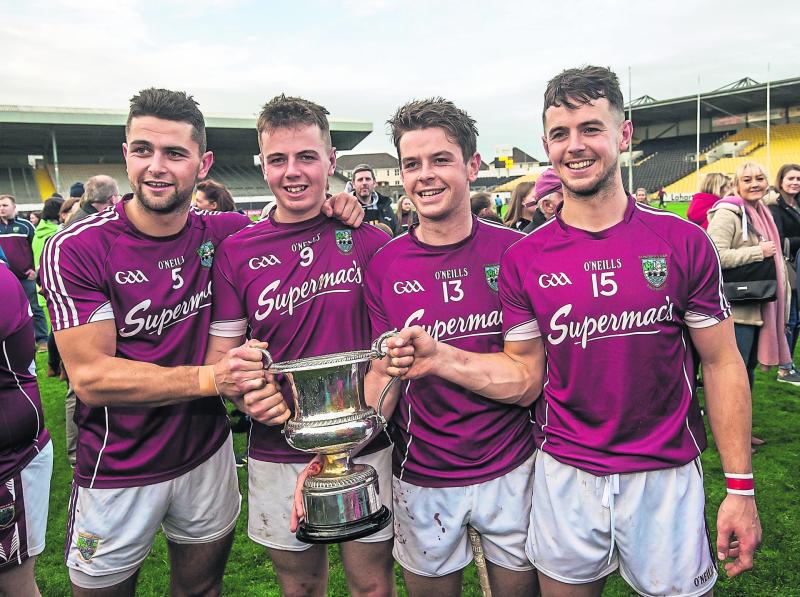 Brennan boys....Geoff, Paddy, Michael and Joe Brennan will be hoping to help St Pat's qualify for the Leinster final

Kilkenny champions, St Patrick’s (Ballyragget), have injury worries as they plan for what will be a difficult Leinster club hurling semi-final.
Unlucky attacker, Barry Staunton, who picked up a bad injury in the quarter-final win over Ardclough will be out of action until the New Year.
He spent five days in hospital after suffering a punctured lung against Ardclough, and manager Jim Lyng and selectors, Brian ‘Tim’ Phelan, David Buggy and James Dowling will have to plan without him for Saturday’s intermediate club semi-final against Kiltale (Meath) in Pairc Tailteann (2pm).
The long serving Brian ‘Brook’ Phelan, who celebrated his 37th birthday on the day of the county final win over Graigue-Ballycallan, is nursing a rib injury.
A decision on his fitness will be left until shortly before the game.
St Pat’s are playing for a place in the final against Glenealy or Crossabeg Ballymurn/St Anne’s.
Kiltale were beaten by Kilkenny champions, Carrickshock, last year but it was a close call.
St Patrick’s had better note the warning, because going into the match as favourites will count for nothing.
They are Kilkenny’s last remaining hope of capturing Leinster honours at club level after senior champs, Dicksboro, and junior kings, John Lockes (Callan) were beaten in their respective championships in recent weeks.
If St Pat’s lose Brian Phelan on top of Staunton, they will be stretched more than a bit. Few clubs can afford to lose two players from their attack and not suffer, hence the desire to have Phelan aboard.
The Kilkenny champions, former winners of the All-Ireland club junior title, are a fair detail on their day.
Smashing
They are a good hurling team, with some smashing individuals like Kevin Kelly, who enjoyed a terrific Kilkenny championship, Michael and Joe Brennan, Geoff Morrissey, Stephen Stautnon and Seoirse Kenny.
No doubt manager Lyng will be pushing every one of the players to give that little more, because they have more to offer than they produced against Ardclough.
Kiltale have beaten The Harps (Laois) by 1-22 to 1-15, a score which would suggest they have sharp attackers. Five of their attackers featured in the scoring.
Having to travel, and with Staunton a definite non-starter, the odds stack up against St Patrick’s because Kiltale won’t be a soft touch.
The Kilkenny champions face a massive test, and they will earn the ticket into the Leinster final - if they are to get it.
Kiltale (v The Harps) – Ollie Regan; Anthony Donnelly, Philip Garvey, Ciaran Ennis; Ronan Ryan, Stephen Donoghue, Conor Shirren; Anthony Forde (0-1), Padraig Kelly (0-2); James Kelly, Cathal McCabe (0-2), Mark O’Sullivan (0-3); Peter Durnin (0-2), Cillian O’Sullivan (0-3), Jack Regan (1-9, 0-6fs, 2 65s). Subs – Ross Ryan for Shirren (ht), Adam Murphy for Garvey (51), Eamon Ryan for P Kelly (60), John Donoghue for McCabe (62).
St Patrick’s panel - Michael Gannon, John Mooney, Geoff Morrissey, Mark Staunton, Geoff Brennan, Stephen Staunton (capt), Bill Staunton, James Gannon, Paddy Brennan, Seoirse Kenny, Kevin Kelly, Barry Staunton (inj), Michael Brennan, Brian ‘Brook’ Phelan (inj), Joe Brennan, Paddy Gannon, Paddy McEvoy, Oisin Brennan, Sean Mooney, Robbie Healy, Eoin Bergin, Conor Delaney, Ger Staunton, Alan Ruth, Richie McEvoy, Jack Ryan, Shay Ryan, Michael Kenny, Jody Phelan, Eoin Delaney, John Phelan, Billy Morrissey, Dessie Hickey, John Butler, Conor Bolger (inj).