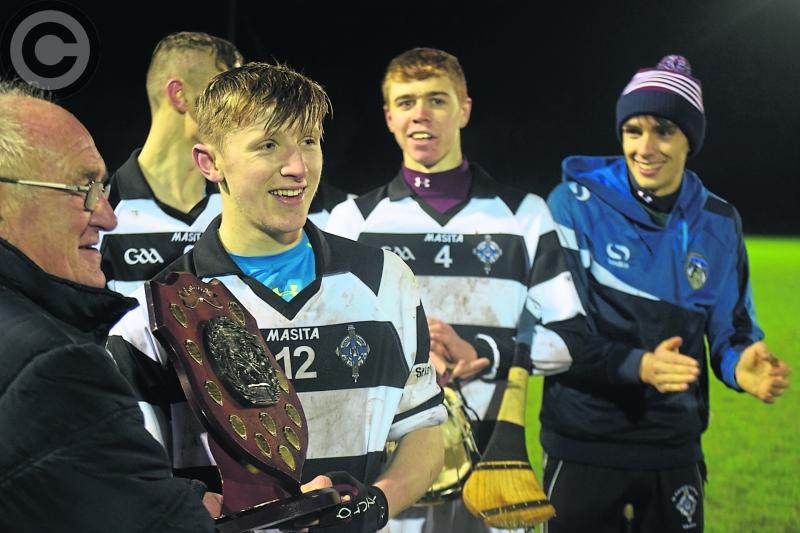 Happy man...St Kieran's College captain, Daithi Barron is presented with the winners trophy as a happy Jack Ryan looks on

Beaten All-Ireland finalists of last season, St Kieran's College served notices that they will be a force again come championship time when they scored a good win over Borris vocational school in the Leinster post primary schools senior hurling league final played under lights in Fenagh last night.
A biting wind and heavy rain made conditions very trying for both teams, and that was reflected in the scoring. St Kieran's led at half-time by 1-2 to 0-3, the goal being scored by Owen Wall in the first minute.
With fine free taker, Ciaran Whelan doing his best to keep Borris in touch, they put it up to the opposition even after suffering the bad blow of losing centre-back Tony Lawlor through injury in the run up to the break.
In the end goals from Owen Wall in the 38th minute and Eoin Cody in the 46th minute swung the issue Kieran's way.
SCORERS: St Kieran's College - Owen Wall (2-0); Eoin Cody (1-2); Daithi Barron (0-2); Ciaran Brennan (0-1). Borris VS - Ciaran Whelan (0-4); Dan Sheehan, Jason O'Neill, Jon Nolan (0-1 each).