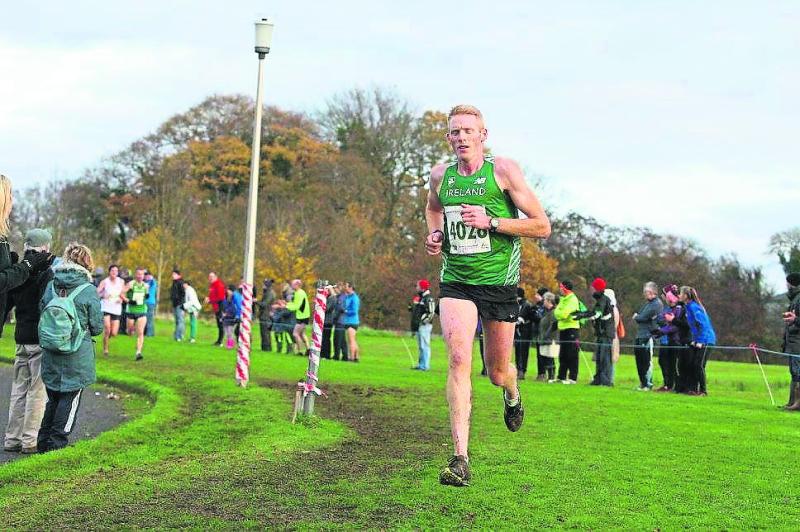 Just like a fine wine, Brian Maher just keeps getting better and better with age.
The Kilkenny City Harriers (KCH) athlete scored a great win in Derry on Saturday when representing Ireland in the over-40 cross-country race in the British and Irish Masters.
In a great performance, Maher finished 10 seconds clear of Neil Boniface of England and Ireland’s Declan Reed. Ireland won the team event from England and Scotland.
With soft underfoot conditions and a course that moved between parkland and wooded terrain, the conditions were ideal for cross-country running. From the start Brian was in the leading pack, remaining strategically placed in fourth place for most of the race.
With about 1km to go, the tall Conahy man took the pace up a notch. Moving to the front he gradually put space between himself and the chasing three athletes. Maher retained this lead all the way to the victory podium.
Throughout the race he looked very comfortable, composted and very capable of striking victory in this, his first Masters Cross Country International.
No stranger to the Irish cross-country scene, Brian won his first Leinster senior cross-country title back in 2007, finishing fifth in the Nationals the same year. In 2008 he finished sixth in the national cross-country and earned his place on the Irish team for his first ever World Cross Country in Edinburgh.
Since then he has made several international appearances, going from strength to strength. Just a month ago he won the county cross-country title in Kilmacow, his 11th such honour.
Also competing in Derry was St Senan’s AC athlete Adele Walsh. She was the fourth Irish woman home in the female over-40 category and 10th overall in the over 40s. Ireland were second team. Adele also competed in this event last year.
County 10 mile
While Kilkenny’s Masters were making their mark in Derry, more local athletes were in action in the county 10 mile road championships in Dungarvan.
The event was hosted by Gowran AC and run in conjunction with the sixth Stook 10 mile road race.
Despite the inclement November weather, the numbers participating were well up on last year.
Danny Shanahan from Thomastown took the men’s title while Maria Griffin from St Joseph’s took the women’s title.
In the team events, Gowran reclaimed their men’s title with strong runs from Derek Kehoe, Dean Rowe, Lyndon Barcoe and Simon O’Dwyer. The trio of Caoimhe Sheeran, Caitriona Muldowney and Cathy Millett took the women’s team title for KCH.
Results
Results, county 10-mile road championships (club code: G = Gowran, GB - Graigue-Ballycallan, KCH = Kilkenny City Harriers, SJ = St Joseph’s, SS = St Senan’s, T = Tullaroan, TT = Thomastown:)
Men: 1 Danny Shanahan (TT), 2 Paul Moran (KCH), 3 Derek Kehoe (G), 4 Dean Rowe (G), 5 Lyndon Barcoe (G), 6 Simon O’Dwyer (G), 7 Tom Corrigan (G), 8 Keith Doyle (KCH), 9 Philip Fennelly (KCH), 10 John Davis (TT), 11 David Lanigan (SJ), 12 Gerry Walsh (TT), 13 J.D. Flynn (KCH), 14 Joe Treacy (G), 15 Niall Sheehan (G), 16 Stephen O’Connor (SJ), 17 Eoin Molloy (KCH), 18 Robert Dunne (KCH), 19 Adrian Cunningham (G), 20 Maurice Barcoe (G). Team: 1 Gowran, 2 KCH, 3 Thomastown.
Women: 1 Maria Griffin (SJ), 2 Caitriona Muldowney (KCH), 3 Caoimhe Sheeran (KCH), 4 Teresa Meaney (G), 5 Kathryn Kennedy (G), 6 Mary Doolan (SJ), 7 Cathy Millett (KCH), 8 Caitriona Corr (G), 9 Maria Cormack (KCH), 10 Laura Lafferty (KCH), 11 Sheila O’Callaghan (KCH), 12 Mary Ann Molloy (KCH), 13 Valerie O’Callaghan (SS), 14 Catherine Guthrie (T), 15 Teresa Corcoran (GB), 16 Emma Tobin (G), 17 Rhoda Griffith (G), 18 Mairead Lacey (KCH), 19 Anne Marie Shortall (KCH), 20 Ann Esther Joyce (G). Team: 1 KCH, 2 Gowran, 3 KCH B.
All-Ireland
Sunday will be the high point for many of the county’s juvenile cross-country runners as they head to Abbottstown for the All-Ireland finals.
The juvenile All-Ireland evens finals will take over the Dublin venue, with a strong Kilkenny presence in plenty of events - there will be county teams in all the races except the boys’ under-12 final.
The St Senan’s under-12 girls’ team were second last year and should be well placed again this year, while KCH have an excellent chance of team medals in the boys’ under-18 event.
In the individual standings, Tara Ramasawmy and Tadgh Connolly of St Senan’s, Adam Fitzpatrick and Shay McEvoy of KCH, Sara and Hannah Kehoe of Gowran, the Kirwan sisters of Thomastown and Castlecomer’s Will Fox should make an impact in their races.
The senior races have, for the first time in many years, both men’s and women’s teams competing.
In the men’s race a full contingent of 15 athletes are represented on the county team, with the KCH club team of Brian Maher, Thos Hayes, Eoin Everard and Tom O’Keeffe expected to feature in the club results.
The women are making an appearance after more than a decade and are spearheaded by Castlecomer’s Lauren Dearmody and a strong St Senan’s contingent.