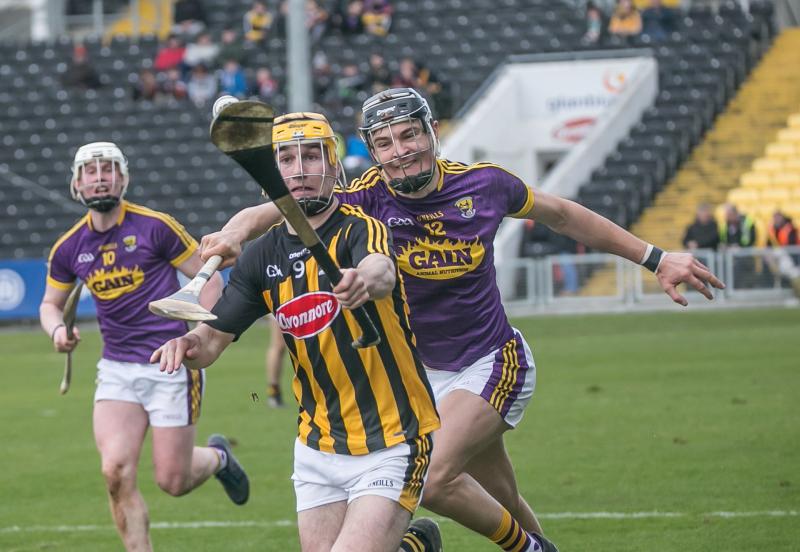 Richie Leahy has made a big impression with Kilkenny

A place in the Allianz Hurling League semi-finals would probably have satisfied the majority of Kilkenny supporters, considering how the campaign started back in January.
Indeed, making the last four must feel like a triumph to many.
Six games, four victories, two losses. That’s the short story of how Kilkenny got on in the National League to date.
The long story has a lot more twists and turns.
A lot of players have been tried and tested. Some rose to the challenge. Others are still climbing.
That’s the nature of the beast that is sport. There will always be players who will take to the high octane pace of inter-county hurling like a duck to water.
Others, well, they take time. But don’t dismiss those who are slow to mature. There have been plenty of them in the past and when they eventually made it they were huge.
A certain writer (he may or may not be writing for this paper!) recently compiled a list of players the Kilkenny public should watch out for in 2018.
Honestly you could compile a pull out of potential candidates, but I have chosen to limit the list to five players.
Only 15 can take to the pitch, and there is only a select few of the new players who will earn the coveted championship jersey.
Here we give an opinion on who among the newcomers has the best chance of playing in May and possibly beyond that.
1 - Richie Leahy. He is definitely one of the front runners. He is growing in confidence with every game he plays.
Leahy was already an exciting prospect when he came on as a substitute in the 2017 All-Ireland championship defeat to Waterford.
However, this year he has kicked on. Case in point, the most recent game against Wexford.
The Rower-Inistioge man scored a sublime point in the first half from near the sideline. However, it was what he did before that that was most impressive.
He turned over the ball, soloed it out of a possible cul de sac and almost nonchalantly struck it over the bar.
In Brian Cody’s era, most forwards were judged by their ability to win their own ball. Richie Leahy can consider himself firmly in that category.
2 - Martin Keoghan. He was exceptional in the third round League win against Waterford. While he may have been taken off in the last couple of games, he has done enough to show that he will be a force pretty soon.
He is still quite young. Sometimes that can work against you when you attempt to make the giant leap to top flight hurling.
Keoghan has shown himself to be up to the challenge, both from a physical and hurling perspective.
He could easily play a part in Kilkenny’s championship campaign. The one thing that might come against him is his lack of experience.
3 - Enda Morrissey. The young Bennettsbridge man has featured regularly in Kilkenny’s League campaign, and it is easy to see why.
While Padraig Walsh appears to be marked down as the full-back for the championship, his move from wing back has left a vacancy. Morrissey looks intent on filling it.
He has all the qualities you expect in a good defender. He is strong under the high ball. He has good physicality and he can keep his man quiet.
Obviously management will want plenty of options for the defence should anyone get injured. Morrissey has showed he will be a strong candidate come the summer.
4 - James Maher. It would be fair to say the young Freshford man has had a hard time of it in the last couple of years. He was primed to make the breakthrough in 2016, but a freak farming accident prevented him from setting the championship alight.
He had struggled to get back since, but 2018 could be the year in which he finally finds his stride.
He has featured in midfield in all his games. Given his propensity to score and his strong physique, he could be primed to fill the void left by Michael Fennelly, eventually.
One of the most pressing concerns for Brian Cody ahead of this campaign, along with finding a full and centre back, was finding a strong midfield pairing. He found something in the pairing of Richie Leahy and James Maher.
For Maher to be assured of a championship place, he has to keep proving he can be effective in this vital position.
They might be an inexperienced pair to have together in a crucial area, but you never know.
5 - Paddy Deegan. Okay, so Paddy is not exactly a new player, but he is operating in a new position at corner-back.
He originally operated on the half back line. Since he moved to No. 4 he has been very impressive.
The Kilkenny full back line has come under serious fire in recent times. Some pundits and supporters believe it is a bit of a weak spot that other teams are targeting.
Not only did Brian Cody make it his mission in 2018 to make the full back line as strong as it can be, but he has tried to make sure he has plenty of options.
Paddy Deegan has been performing well at corner back. He has played a key part in the experimentation with different puck-outs as the Cats play with a more measured hurling style.
Lest we forget, there is a certain Mr Paul Murphy who will return to the fold shortly too. He won't find it easy to get a jersey , especially not off Mr Deegan.
All five players stand a real chance of being part of the championship.
It is vital considering the amount of games that will be played in the Leinster championship and possibly beyond, that Kilkenny have a strong panel.
In other words, plenty of options will be needed!