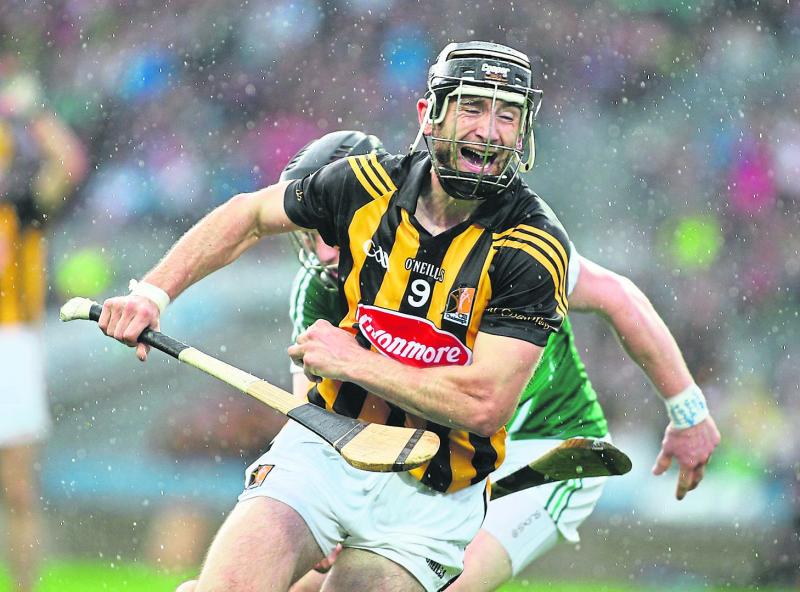 Conor Fogarty was the top scorer for Erin's Own

Much like a raging river, Ballyhale Shamrocks are almost impossible to stop when they are in full flow.
It may only be the day one of the campaign, but Henry Shefflin’s side sounded out a warning of their intentions, delivering a fast-paced slick performance that saw them romp to the senior hurling league points.
Erin’s Own (Castlecomer) were the unfortunate team to find themselves in Ballyhale’s way at a gusty Tom Ryall Park on Saturday. Even with the wind at their backs in the first half the ‘Comer men were, at times, bystanders as the Shamrocks stormed into a lead they wouldn’t lose.
What was most impressive was how the Shamrocks could mix things up, especially in a second half where they played with 14 men after the dismissal of Michael Fennelly. There were stages where Erin’s Own were left chasing shadows as their opponents used short snappy passes to get the ball up to dangerous forwards of the calibre of Adrian Mullen and T.J. Reid.
Then, at other times, they went the direct route, proving Eoin Reid and Brian Cody with chances to trouble the ‘Comer backs.
What was most impressive was how they kept that relentless attitude until the finish. Nine points up (1-18 to 0-12) with little over 10 minutes left they didn’t ease up, preferring to kick on and put more daylight between the sides.
Key to that run (surprise, surprise) was T.J. Reid. He was a real thorn in Comer’s side, striking points from a free and play - and then another, despite being on his knees in front of the square!
The finish mirrored what was a good first half for Ballyhale, who played into the teeth of a biting wind. By the end of the first quarter they were three points clear (0-5 to 0-2), brothers T.J. and Eoin Reid doing the bulk of the damage with a brace apiece.
They kept the pressure on Erin’s Own, piling on scores through the hard-working midfielder Ronan Corcoran and the bustling Brian Cody, who was a real handful.
They could have added a goal to their account too; Eoin Reid profited from a good solo run by brother T.J. but Comer keeper Tom Brophy brought off a fine close-range save.
There was little Brophy could do to deny Reid from raising the green flag four minutes from half-time. Picking up a booming Michael Fennelly clearance Adrian Mullen set off for goal on a blistering run, pausing only to tee Reid up to hammer a low drive home (1-9 to 0-5).
Erin’s Own were in all sorts of trouble. Incredibly, they would enjoy their best spell just when it looked like they were at their lowest.
Sparked into Life
The gap had stretched to nine points (1-11 to 0-5) - Evan Shefflin got a peach of a point, storming forward and trading passes with Conor Phelan before striking from long range - before Erin’s Own sparked into life. Conor Fogarty did most of the cajoling, setting up a point for Jamie Holohan before scoring another to add to the pair he scored from inside his own half earlier on.
That brief run gave Erin’s Own a glimmer of hope. They got another on the stroke of half-time, when Ballyhale captain Michael Fennelly was sent off for an off the ball incident. (Half-time: BS 1-11, EO 0-8).
Facing into the second half with a man advantage, Erin’s Own must have fancied their chances at eating into the Ballyhale lead. They got off to a good start, Jamie Holohan picking off the first point of the half, but the door on a potential comeback was slammed shut as the Shamrocks stepped up through the gears.
Three T.J. Reid points got Ballyhale, who went with a two-man full-forward line in the second half, up and running but they were also helped by a fine save from Dean Mason, who made a superb instinctive stop to deny Conor Fogarty from close range.
After those three points the Shamrocks went one better soon after, stringing four scores together through Reid (0-3) and Adrian Mullen. The game was over as a contest by the three-quarters stage but Ballyhale didn’t let up until they heard that final whistle.
SCORERS: Ballyhale Shamrocks - T.J. Reid (0-11, 0-6 frees); Eoin Reid (1-3); Adrian Mullen (0-4); Ronan Corcoran, Joey Cuddihy (0-2 each); Evan Shefflin, Brian Cody (0-1 each). Erin’s Own - Conor Fogarty (0-4, 0-1 free, 0-1 65); Jamie Holohan (0-3); Shane Feehan (0-2); Sean Buggy (0-1, free); Eoin Brennan, Martin Boran, Ross Connolly (0-1 each).
Ballyhale Shamrocks - Dean Mason; Brian Butler, Joey Holden, Conor Phelan; Gavin Butler, Michael Fennelly, Evan Shefflin; Richie Reid, Ronan Corcoran; Adrian Mullen, T.J. Reid, Joey Cuddihy; Mark Aylward, Brian Cody, Eoin Reid. Subs: Eoin Cody for E. Reid, 31 mins; Kevin Mullen for Aylward, 56 mins; Darragh Corcoran for Cuddihy, 56 mins; Eoin Kenneally for Phelan, 59 mins; Patrick Hearne for Cody, 59 mins.
Erin’s Own - Tom Brophy; James Brennan, Conor Delaney, Niall McMahon; John Dowd, Ciaran Wallace, Aidan Moran; Conor Fogarty, Eoin Brennan; Shane Feehan, Martin Boran, Stephen Daly; Ross Connolly, Jamie Holohan, Sean Buggy. Subs: Darragh Brennan for Buggy, 42 mins; Declan Buggy for Daly, 48 mins; Liam Wallace for McMahon, 53 mins.
Referee - Peter Burke (Emeralds).