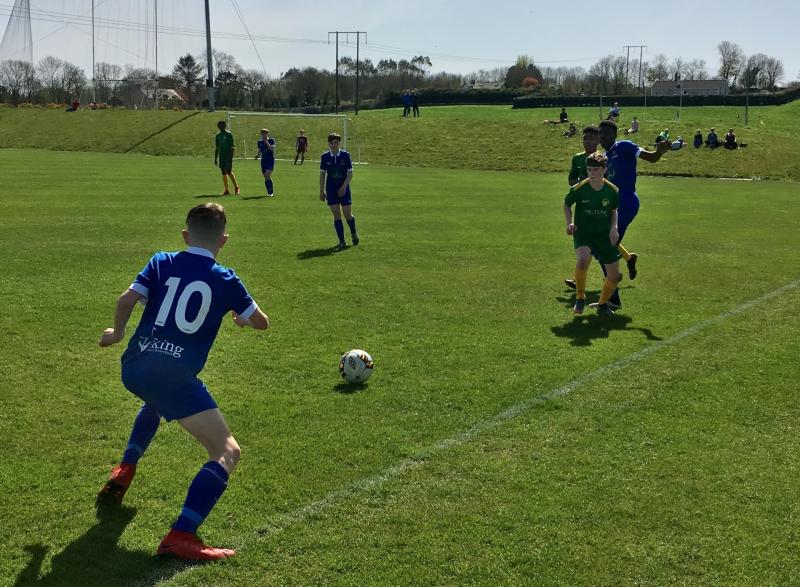 There was no derby delight for Carlow Kilkenny as Waterford took the South-East bragging rights in the under-15 Airtricity League.

A week after their good win over Cobh Ramblers, the local side were brought back to earth with a bump as a well-drilled Waterford made sure all three points stayed at the WIT Sports Arena.

Carlow native Jake Doyle did a lot of the damage with a scorching first half goal, but goalkeeper Cormac Rooney’s second half penalty save went a long way towards sending Mark Ross and his team home empty-handed.

The visitors had a frustrating day in front of goal. They created plenty of chances but couldn’t make the count. They could have taken a seventh minute lead when Jake Haughney’s throw-in bounced into Daryl Atumba’s path, but he lashed his shot straight at Rooney.

The visitors were quickly made to rue that miss as Waterford took the lead within 60 seconds. Sent free down the right by Salim Ahmed’s flick-on, Doyle raced on to the ball and unleashed an unstoppable shot from out on the right.

Waterford looked good for the lead but couldn’t find a second goal to make their afternoon more comfortable. Abel Alabi should have scored when Paul Kiely’s 16th cross fell at his feet, but he stabbed the ball wide, while Doyle saw his long-range shot fly over the bar with 21 minutes on the clock.

Carlow Kilkenny stepped up the pace in the second half, a move which almost had an immediate impact. Daryl Atumba should have made it 1-1 on 43 minutes when a telling Darren Lawlor pass caught the Waterford defence cold. The striker hesitated before shooting, a move that gave Waterford time to recover and make a telling block.

Lawlor was a shining light for Carlow Kilkenny’s performance, and almost got his name on the scoresheet before the hour. Driving at goal as he cut in from the left he jinked this way and that into the box, beating two defenders, but Rooney got down to make a great save.

The pressure was building, so it was no surprise when Carlow Kilkenny created another chance soon after. The hosts were carved open by a killer diagonal pass from Lawlor but, before he could shoot, Atumba was brought down by Rooney.

The netminder atoned for his error, however, diving low to his left to beat out Adam McCarron’s penalty.

Waterford responded well to the growing pressure, switching things up. They went with four at the back after that, shutting up shop to keep the visitors out of the game.

Carlow Kilkenny will be hoping for better luck when they play host to Kerry next weekend.