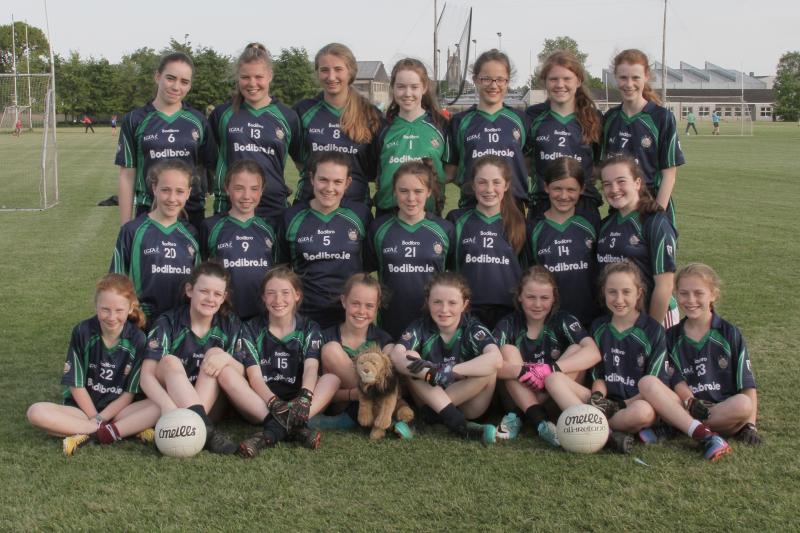 On Friday, June 29 the Kilkenny City under-14 ladies Gaelic football club will line out in the Division 1 of national Féile Peil na nÓg.
To be given Division 1 status at Féile is a huge honour and is a result of hard work and dedication by all involved. Going up against the champions from Dublin, Cork, Kerry and four other top football counties will be a mammoth task, but it is one Kilkenny City will relish.
Since being founded in 2011 by current chairman, John Gorey and vice-chairman, Eoin Hennessy, the Kilkenny City club has gone from strength to strength. They field teams at all age levels from under-10 to adult.
In 2012 they represented Kilkenny for the first in the National Féile and won the Division 3 cup. They followed by winning the Division 2 national Féile cup and in 2014 they reached the Division 1 Shield final.
Last year they won the Division 2 national Féile cup as well as the All-Ireland Kilmacud 7s’ Plate. They have also won the adult championship in Kilkenny for the past three years and each year were narrowly beaten in the quarter-finals of the Leinster club championship.
It is due to this success that they are now graded as one of the top eight teams in this year’s under-14 national Féile Peil na nÓg.
As they say, success is not given. It is earned. That statement typifies Kilkenny City ladies Gaelic football club.
The club trains all age levels for 10 months of the year in order to be able to compete with Ireland’s top football counties.
Constantly portrayed as the underdog, Kilkenny City have made a habit of upsetting the odds; like in last year’s Division 2 Féile final when they overcame fancied New York who started the campaign with over 100 girls in training and eventually narrowed in down to 24.
Kilkenny City had 26 girls registered at under-14 level. This year Kilkenny City will again pick from a similar number but will face the likes of the Dublin champions who have over 60 girls to pick from. Still they will be chasing the honours.
The management team of Conor Gorey, John Gorey and Emer Tynan have expressed their thanks to all who have given financial support this year, as well as the Finance Committee of parents Paraic Kelly, Michelle Crowley and Denise McGrath.
Travelling to Féile is expensive and would not be possible without this continued support. On the weekend of the 29th the girls of Kilkenny City ladies Gaelic football club will strive to do Kilkenny proud and embrace the experience of Division One football.