Kilkenny glad of weekend break after three weeks of action 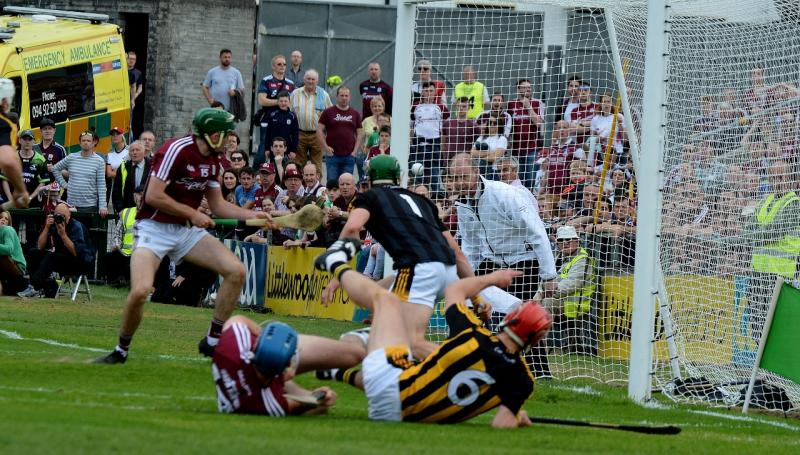 Where is it? Action in the Kilkenny goal area against Galway

After battling through over 215 minutes of gruelling championship hurling during the past three weeks, ‘New Kilkenny’ will be able to rest this weekend.
The Cats will take a break from the action, but they will resume on Saturday week with a deadly seriously clash against great rivals, Wexford, in Nowlan Park with qualification for the Leinster senior hurling championship final still on the agenda.
Wexford play in the mood All-Ireland champions, Galway, this weekend, and they finish their commitments in the Round Robin series in Nowlan Park.
“It is no harm to have it,” suggested Kilkenny manager, Brian Cody, of the break after the Noresiders eight match unbeaten run was halted in emphatic fashion by flying Galway in Salthill on Sunday.
“We have gone a few weeks in a row, and it is tiring and all the rest of it, injuries and that. Obviously we have a huge match coming up against Wexford.
“It is a question of recovery now. We have a two week break and have a weekend off and can do a small bit of work.”
The James Stephens clubman praised Galway’s hurling and attitude, but he felt his own charges worked very hard but they were under a lot of pressure.
“Galway are very, very strong and we know that,” he said of the current form of the All-Ireland champions. “We knew we were coming to face the All-Ireland champions, an outstanding team.
“And we weren’t good enough today. We weren’t good enough, obviously, on the scoreboard, to take them on. But look it, it’s a round robin. It is a league thing. We have three games played and have one to play and that’s our focus.”
When asked he said Kilkenny’s paltry returns from play (1-2) was unusual, very strange.
“We were obviously getting a lot of frees, for sure, and I suppose a lot of the frees camouflages the fact that you can’t score from play,” he continued. “But that is the way it went.
Confidence
“Sometimes games go like that. We certainly would like to be working the scoreboard more from play.”
He said the boost in confidence Galway got from winning the All-Ireland last year was all over their game.
“I would say the Galway team of years gone by was also very, very good,” he opened. “They have won their All-Ireland now. They threatened to do that many, many times.
“They have done it now, and you can see the confidence in their play and their team work. It is not a surprise. The hurlers have been there the whole time. And they are a hugely strong team. They have an awful lot going for them.”
He offered little insight into the Kilkenny goal by Walter Walsh that was disallowed. The score was 1-17 to 1-11 at the time.
“It would have brought the gap back to three points, and it would have given us a great lift,” he said. “I am sure it was disallowed for a reason. But that’s it. They had one disallowed in the first half.”
When asked for an update on the fitness of former Hurler of the Year, Richie Hogan, he said the Danesfort attacker was back in the panel and he hoped he would be able to push on from here.
Galway manager, Micheál Donoghue, was all smiles and when it was suggested he could be pleased with the showing and victory, he nodded his head.
“Yeah,” he beamed. “Happy out. In fairness, the last couple of weeks went well for us in training. We were keen to get back into the match situation. There are four games in this series.
“We had a week off after the first one which enables us to go back to the training ground. We got a good performance out of the team. We are well ground. This is just game two. We have a huge challenge again next weekend.”
When it was suggested they were worth more than the 1-9 to 1-5 lead they had at half time after playing with the breeze, he agreed.
“That is testament to Kilkenny,” he replied. “We were under no illusions about what they had done this year. It is always a huge challenge every time we play them.
“They worked really hard and they restricted us. Our play wasn’t reflected on the scoreboard, but that is testament to Kilkenny’s dogged defence and how hard they worked.”
He made little of the fact this was Galway’s first win over Kilkenny since 2012.
“Our thing the whole time is to move on,” he said. “We did put a lot into the fact that this was our first championship game here in Galway. The lads have built a massive rapport with the supporters.
“You could see by the size of the crowd what it all means to the people of Galway to have a game here. The lads responded to that. We know it is just game two. We are going into a big challenge next week.”