Slick Kilkenny minors are on track! 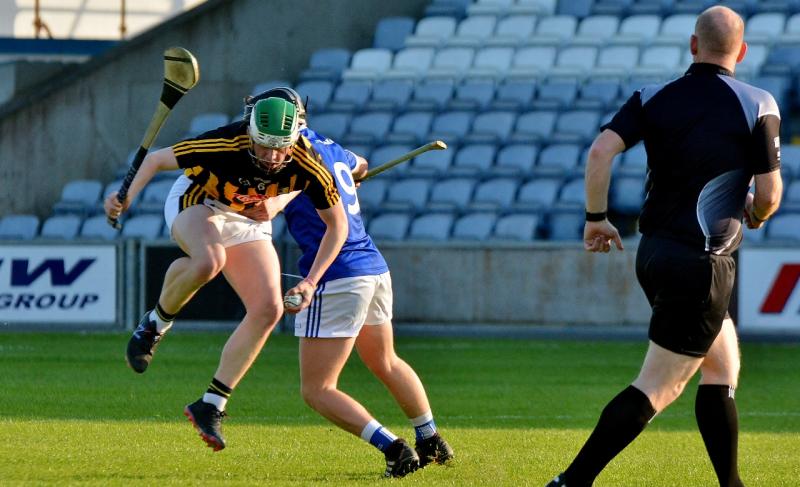 Seeing that they have a 100% record at this stage and are top of the class in the Tier 1 group, Kilkenny would be entitled to an A rating in terms of results and scoring.
Three wins, three big scores - 1-26 t0 1-12; 3-21 to 1-12 (Wexford); 3-23 to 4-12 (Dublin).
While the group are doing well, very well in some quarters, they didn’t quite make the maximum grade, losing a smidgeon for the second half effort when beating determined Laois in round three of the Leinster minor hurling championship in Portlaoise.
While the losers never threatened real danger in the closing half, they did well enough and they fearless brought the challenge to the opposition. In the first half Kilkenny didn’t allow that to happen.
After taking control from the off and playing top class team hurling, with some brilliant individual performers too like Ciarán Brennan and Darragh Maher, the Cats led by 0-12 to 0-4 at the break.
That was after playing against the wind, and shooting seven wides.
Some might suggest it might be expecting a bit much to get more of the same, but this fine squad sets its own high standard, and by that standard it must be judged.
Anyway, Kilkenny are now through to the knock-out stages of the championship. Their next engagement on June 16 will be a quarter-final away against a Tier 2 or Tier 3 county.
Happy enough
The opposition should be known this weekend.
Beyond that the Leinster semi-final will be played on June 23.
“We were happy enough to win and to put up another big score, 1-19 from play, but maybe the same drive over the 60 minutes wasn’t there as was seen in the two previous matches,” was the summary from Kilkenny manager, Richie Mulrooney.
“I think the fact we had beaten Dublin and Wexford, and we went in at half time well ahead against the breeze, maybe the lads became a little complacent at the start of the second half.
“To be fair, when Laois came back to 0-19 to 1-11 the lads did knuckle down again and did well during the closing 10 minutes or so.”
The movement of the team was really good, he felt.
“We are very, very, very pleased with things,” he insisted. “In terms of effort in games and training, we couldn’t ask for more. Now the challenge is to be ready for the knock-out stages.”
Ready
Kilkenny were certainly ready when the action commenced on Friday.
They were all over the opposition early on. They shot four wides while registering two scores through Ciarán Brennan and Conor Kelly (free) during the opening six minutes.
Brennan was picked at No. 11 but played at 14 in a change with Cian Kenny, and they both constantly ripped holes in the home defence. Brennan, who is gifted with a lovely side-step, raced here and there making and getting into space.
Laois missed two relatively easy chances from frees during the first quarter, at the end of which they trailed 0-4 to 0-2. There was one meaningful shot on target, with Kenny bringing the best from home ’keeper, Lorcan Fitzpatrick, in the 14th minute.
Kilkenny’s movement, support play and use of the ball was very good. By half-time they were 0-12 to 0-4 in front.
When they opened the new half with an early point from a free from 62 metres by Conor Kelly, an encore seemed on.
Ferocious drive
Before the 31st minute had run its course, Laois had the ball in the town end net, courtesy of a ferocious drive by Cathal O’Shaughnessy. Within seconds free taker Adam Kirwan added a point from a close range effort, and suddenly the home side began to do better.
Driven on by star man and strongly built centre-back, Conor Cosgrove, plus Alan Connolly, Tadhg Cuddy, Fionán Mahoney and Ben Shore, they settled into a good rhythm and gave a good account of themselves.
However, virtually every time they scored subsequently, Kilkenny replied.
The points began to accumulate - Conor Kelly (2) and Ciarán Brennan added to the Kilkenny gains.
The Cats were 0-18 to 1-7 in front in the 39th minute when Cian Kenny cut a hole in the home defence for Darragh Maher to have a go. The goalie saved well.
Gap down
When Laois put three scores together from Adam Kirwan, Mark Hennessy and Cosgrove hitting the 50 minute mark, they had the gap down to 1-11 to 0-19.
Then Kilkenny shook themselves up. Eoin Guilfoyle placed midfield raider, Darragh Maher for a point. Kirwan hit back for Laois, but during the following minutes Maher again, James Young and Kelly all registered for the winners.
Laois wing-back, Alan Connolly, did crash a shot against the cross-bar after that, but in their next raid Kilkenny had a point from Ciarán Brennan. Within seconds sub Niall Higgins had the ball in the net.
Darragh Maher and Conor Kelly rounded off the scoring. Kilkenny dominated the closing 10 minute exchanges by 1-7 to 0-1 as if to underline their true potential.
SCORERS:
Kilkenny - Conor Kelly (0-9, five frees, two 65s); Ciarán Brennan (0-5); Darragh Maher (0-4); Niall Higgins (1-0); Eoin Guilfoyle (0-3); Jack Doyle, Cian Kenny (0-2 each); Jamie Young (0-1).
Laois - Adam Kirwan (0-5, three frees); Conor Cosgrove (0-4, frees); Mark Hennessy (0-3); Cathal O’Shaughnessy (1-0).
Kilkenny - Jason Brennan (Young Irelands); Pádraig Dempsey (Mullinavat), Pádraig Moylan (Dicksboro), Killian Rudkins (Barrow Rangers); Shane Staunton (Clara), Jamie Young (O’Loughlin Gaels), Harry Walsh (Dunnamaggin); Conor Kelly, capt (O’Loughlin Gaels), Darragh Maher (St Lachtain’s); Cathal O’Leary (St Lachtain’s), Ciarán Brennan (Bennettsbridge), Jack Morrissey (St Patrick’s); Jack Doyle (Windgap), Cian Kenny (James Stephens), Eoin Guilfoyle (James Stephens). Subs - Niall Higgins (O’Loughlin Gaels) for Moylan; Peter Donohoe (Danesfort) for O’Leary; Chris Korff (Erin’s Own) for H. Walsh.
Laois - L. Fitzpatrick; K. Kelly, D. Brennan, B. Shore; A. Connolly, C. Cosgrove, T. Fitzpatrick; F. Mahoney, S. Farrell; C. O’Shaughnessy, T. Cuddy, E. Hawkes; A. Kirwan, M. Hennessy, D.J. Callaghan. Subs - C. Byrne for Callaghan; N. Carey for Shore; N. Bennett for Hawkes; C. Walsh for Kirwan.
Referee - G. McGrath (Wexford).