Thomastown United A 3, Freebooters A 0 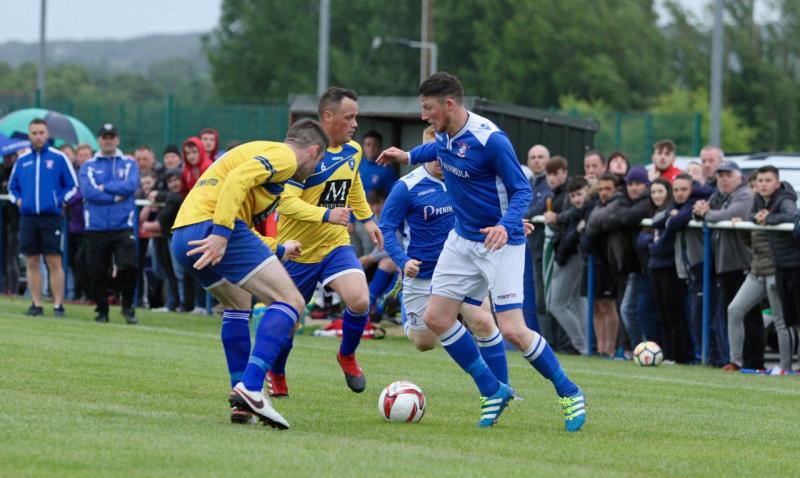 The race for the Premier Division title will have to go for another lap after Thomastown United blasted their way into the playoffs.

An impressive 90 minutes against Freebooters A saw Stevie Walsh’s side get the result they needed to make sure they and title holders Evergreen A will meet in a winner-takes-all game in Derdimus this Sunday at 3pm.

There was a bumper crowd at United Park for tonight’s game where the message for both sides was simple: win!

For Freebooters a win would have seen them lift the spoils at the expense of their rivals, but their hopes took a battering when Thomastown stormed ahead after three minutes.

Dessie Walsh sent the home crowd into ecstasy when he ghosted in at the back post to powerfully head home David Kavanagh’s dangerous cross.

The goal was just what United needed to pick themselves up after Sunday’s McCalmont Cup final loss - but they didn’t stop there. Using the strong wind to peg Freebooters back they pressed for more goals. Sean Brennan and Walsh had more chances in the first quarter, but once Freebooters got to grips with the conditions they also showed their attacking teeth.

The Blues almost found an equaliser in the 20th minute, when United netminder Paul Dunne couldn’t hold on to a Jack Poyntz cross. The ball fell to Henry O’Neill, who tried to turn it back into the goal, but the Thomastown defence was there to clear the danger.

The helter-skelter nature of the game saw the action flow from end to end. Thomastown had a chance to double their lead when Mick O’Neill sprang the offside trap and galloped on to Mark Delahunty’s diagonal pass, but his shot was brilliantly saved by Ciaran Farnan. Freebooters failed to clear the resulting corner, and almost paid the price when a goalmouth scramble gave Robert Skehan some shooting space, but ’Booters managed to block his strike and clear their lines.

The home side kept pushing and doubled their lead just after the half hour. Once again a cross from the left did the damage, but goalkeeper Ciaran Farnan failed to hold Mark Delahunty’s delivery - he may have been distracted by the incoming Sean Brennan - and saw the ball end up in his net.

United went hunting for more goals, but couldn’t add to their lead before the break. Brennan was denied by an acrobatic Farnan save, while Dessie Walsh saw his cheeky 40th minute backheel flash past the outside of the post.

Freebooters were down, but not out. However, the half-time team talk could have been so different had they pulled a goal back before the break. They almost did it when Craig Wall bursting from midfield to split the United defence open in stoppage time. Dunne did well to save Wall’s first shot, before Thomastown skipper C.J. Browne got back to hook the second attempt off the line.

Thomastown boxed clever in the second half, going with four at the back as they faced into the strong wind. They were composed throughout, but took a big step towards the win when Mick O’Neill made it 3-0 with 56 minutes on the clock. In a move started by Browne and continued by Delahunty, O’Neill’s skilful turn and finish all but put paid to Freebooters’ hopes.

They didn’t give up, but without the pace and threat of Emmet Nugent they ran short on ideas. Young subs Craig Hayes and Sean Bolger both tested Dunne with fierce strikes, while Ben Maher clipped the bar late on, but United never looked in danger of being caught.