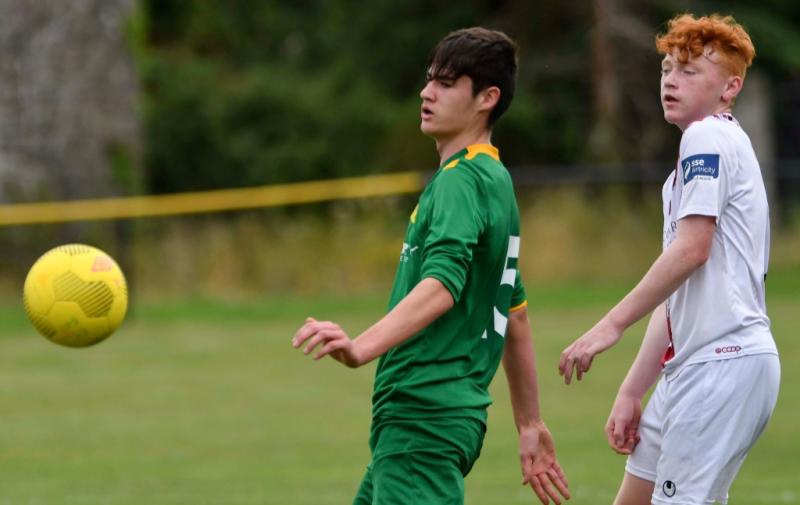 Luck ran out on the Carlow Kilkenny under-15s as Limerick sent them crashing out of the National Cup.

Good fortune helped give the Munster side an advantage they would not lose but it was a frustrating day in Derdimus for the locals, who pressed and pressed but couldn’t make their best efforts count.

Carlow Kilkenny laid siege to the Limerick goal in the second half but didn’t get the rub of the green that the visitors enjoyed. Limerick got a big slice of luck in the 16th minute when defender Jake Prendergast’s free from inside his own half slipped through Josh Coady’s grasp. The netminder frantically tried to hook the ball clear but couldn’t stop it crossing the line.

The goal was tough to take but worse was to follow. Six minutes later Limerick made it 2-0, Michael Molloy meeting Joey Rush’s corner with a bullet-like header.

Limerick were on top now and pushed hard to extend their lead. Coady bravely dived at Keane’s feet to prevent him from doubling his tally, taking a knock for his troubles. Keane then set up Josh Quinlivan for a shot at goal, but his 33rd minute effort flashed just wide.

Carlow Kilkenny raised their game in the second half but couldn’t make their chances count. Niall Rowe had a great chance to halve the deficit when he got on the end of Rory O’Dowd’s corner three minutes after the restart, but his thumping header whistled past the post.

With O’Dowd leading the way Carlow Kilkenny pushed on in the second half. He was involved in their next great chance 10 minutes later, floating in a corner which broke kindly for Kyle Foley, but the defender’s stinging half-volley was superbly tipped away by the alert James Griffin.

The home side’s frustration levels grew as, despite their best efforts, the goals just wouldn’t come. Cian Byrne saw a 59th minute header skim the crossbar, while Oscar Brennan went even closer with two good chances in as many minutes. First, he dragged a snapshot just wide, then beat the last defender to race on to Jack Byrne’s threaded pass but lashed his low shot beyond the far post.

That despair grew even stronger when, for all their pressure, Carlow Kilkenny fell even further behind after Andre Haxhai ended a counter-attack with a low shot across the box that crept inside Coady’s left hand post.

The goal really shattered Carlow Kilkenny’s hopes. To their credit they pressed on, getting some reward when the hard-working Jake Haughney ran on to Jack O’Neill’s free and deftly chipped it over Griffin, but that was as good as it got for the hosts.

While their Cup adventure is over, Carlow Kilkenny’s league season is far from over. They have been drawn with Waterford, Cobh Ramblers and Kerry in phase two. Games, which will be home and away, start in a fortnight’s time.