Kilkenny camogie: players will take a long time to get over Cork defeat 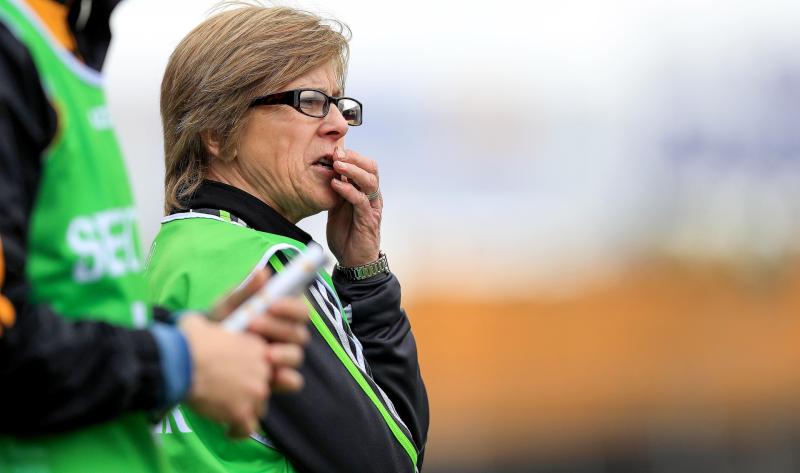 The Kilkenny players will take a long time to get over the heartache and disappointment after Sunday’s second defeat in-a-row in the All-Ireland camogie final.
Ann Downey’s charges hit Croke Park to challenge defending champions, Cork, with the chance of a National League and Championship double within their grasp, but they left empty handed after suffering an agonising one point defeat for the second year running.
Horrible place
“They will take months to get over this,” suggested Kilkenny manager, Ann Downey in a soft voice dripping with pain after seeing the O’Duffy Cup slip away yet again.
“It is a horrible place to be,” she added.
“There is not an awful lot you can say to them to lift them or get them to a better place. Defeat hurts, it really hurts.
“Some will be disappointed with a number of aspects of their game, but they have put so much into camogie and for Kilkenny. They will need time to get over this.”
The last time Kilkenny lost back-to-back finals was in 2013 (beaten by Galway) and 2014 (beaten by Cork), and they didn’t feature in the decider the following season.
The last time any county bounced back for victory after a double whammy of defeats was Cork in 2005 having lost the finals of 2003 and 2004.
“Hopefully they will regroup again,” was the wish expressed by Ann Downey.
The manager felt Kilkenny would regret some missed chances, especially as the divide at the finish was a point.
“We will be saying if we had done this or that things might be different.
“When you cross that white line on All-Ireland final day you have to have experience to be able to hold your head and be clinical in your decision making,” Ann reminded.
“Maybe we didn’t do that at times. Oh, what can you can,” she said as she drew a breath.
“You have to take it on the chin and try and learn from it again. It is hard to take to be honest.”
When it was suggested it was a very tactical match, with both sides packing their defence, she said the stakes were high and both sides knew each other well and there was massive respect all round.
No one was willing to take chances, it appeared.
“In the second half we ran more and missed a few opportunities,” added the former 12 times All-Ireland medal winner.
Hard
“If the ball had gone over the bar we could have been three or four points out. I thought maybe the two frees, especially the one against Davina (Tobin ) and especially the last one, I thought it was a bit hard on us.”
She said Kilkenny had looked at the replay of the final free, and as far as they could see there was no contact to merit the awarding of a free.
“In the heat of battle I wasn’t happy with some of the performances, but I don’t want to take from Cork’s winning effort,” Ann continued.
“If I give out about the referee it can sound like sour grapes, and I don’t want things to be that way.
“I could go on to national radio and criticise the referee who is going to do an All-Ireland the next day, and hope things will turn in our favour. That is not what I am about.
“You have to take what is thrown at you. Unfortunately one or two of the decisions were harsh on us.”
Clubs will help
Kilkenny shot selection, she suggested, might not have been the best at times. On top of the misses, a number of efforts were dropped short into the hand of the goalkeeper.
“All those things added up on the day,” she felt.
When the subject of the referee was brought up again she didn’t want to go into details, but she felt Kilkenny might have been awarded a penalty.
“When the girls get back to their clubs and back playing again it might ease the pain,” the manager continued.
“Let them have a long break and see what they want to do next year.
“They are capable of winning the All-Ireland. They are very young. Without doubt the talent is there.”
Cork scored their 28th O’Duffy Cup win on Sunday. Kilkenny were chasing their 14th title.