Camogie Cats can bounce back, but handbrake must be taken off 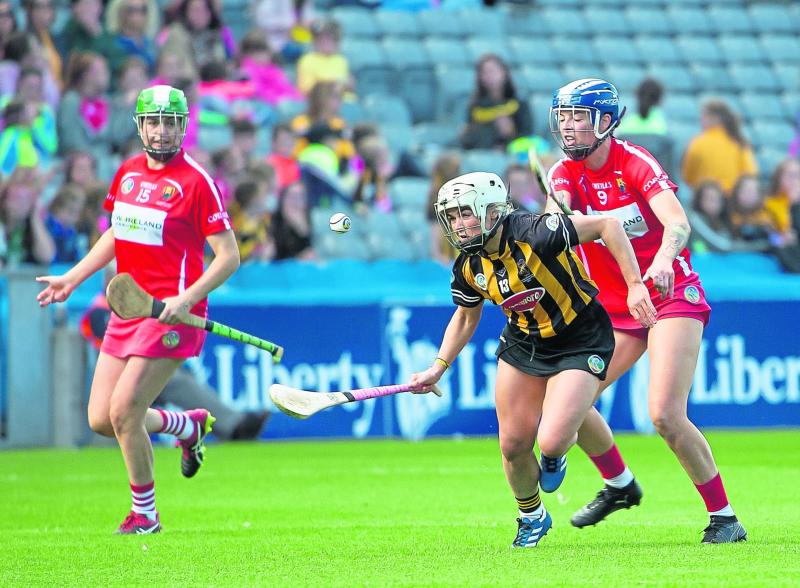 Shelly Farrell tries to get a Kilkenny attack going

You can say that Kilkenny were a little unfortunate in the All-Ireland final at Croke Park on Sunday.
You can say that the referee played way more than the allotted minute of injury time at the end of the first half, upon which Cork hit two rapidfire points and thus retired level instead of going in two points down.
You can say that the free that gave them the winning point was a soft one, and it certainly looked that way. You can say that the free that put them 0-13 to 0-12 ahead a few minutes earlier was preposterous, though not nearly as preposterous as the yellow card for Davina Tobin – who was taken head high in possession – that accompanied it.
You can say that the winners’ penalty was harmless. Most people did.
You can say that the wides count (Kilkenny 7, Cork 4) indicated which team enjoyed the majority of the shooting chances, though obviously shooting chances don’t amount to much when they’re squandered.
You can say that allowing Denise Gaule to take a free six minutes from the end, just after she’d been fouled and floored, was unwise. Sure enough, the sliotar fell short and Cork cleared it.
You can say that to lose two All-Ireland finals in a row by a late point is heartbreaking beyond belief, which of course it is.
And then, after all of that, and if you wanted to be strict yet not unfair, you could say that Kilkenny didn’t do quite enough to win on Sunday and thus left themselves vulnerable to the whims of fate and the referee. It’s what happens when a team employs a highly calculated gameplan.
Last year’s decider was awful, and awfully lowscoring: 0-10 beat 0-9. This year’s was not much better: 0-14 beat 0-13. Kilkenny, in other words, have hit 0-22 in successive All-Ireland finals. Not hectic, is it?
Nine of their 13 points here came from placed balls converted by Denise Gaule. Only three Kilkenny players not named Denise Gaule scored, and none of the three hit more than a point. Even in an era of sweepers and blanket defences, that’s not enough.
For the second year in a row the game was lost in the first half despite wind advantage. For the second year in a row the girls in black and amber hurled in the same register in both halves of the proceedings.
Right, the wind never won a match. We know that. But even a team deploying a sweeper shouldn’t play the same way with the breeze as against it.
Elements
Assisted by the elements? Then try to maximise the advantage. This means playing a less studied game. It means using the length of the field, keeping one’s full-forward line near to goal, getting the ball in quickly to them, asking questions of the opposition defence and preventing them playing their way out. (No spare defender.)
Kilkenny didn’t. They scarcely employed the last 30 metres of turf. What was the object of deploying Katie Power as a target woman if there was no support to feed off her?
The challengers needed to undo their corset just a little in the first half. To open their shoulders and hurl with their hearts and lungs as well as with their heads. It was all a little too studied, a little too mannered.
The upshot was that they failed to compile a lead to carry into the second half by way of a bulwark. Then they could have dragged bodies back into defence and invited Cork to come at them.
As a result they spent the opening 20 minutes of the second half hanging in there, and now they didn’t have the advantage of the wind to allow them use the length of the pitch as well as the width. Although Meighan Farrell’s monster point from midfield was a beauty, it came about because she lacked outlets inside and thus had to fire the gun herself.
It wouldn’t have taken much for Ann Downey and her troops to be celebrating three All-Irelands in a row this week. On the plus side, it shouldn’t take much for them to be celebrating an All-Ireland in 2019.
But first they have to take off the handbrake.