Kilkenny SHC: meeting of giants gives hope to others 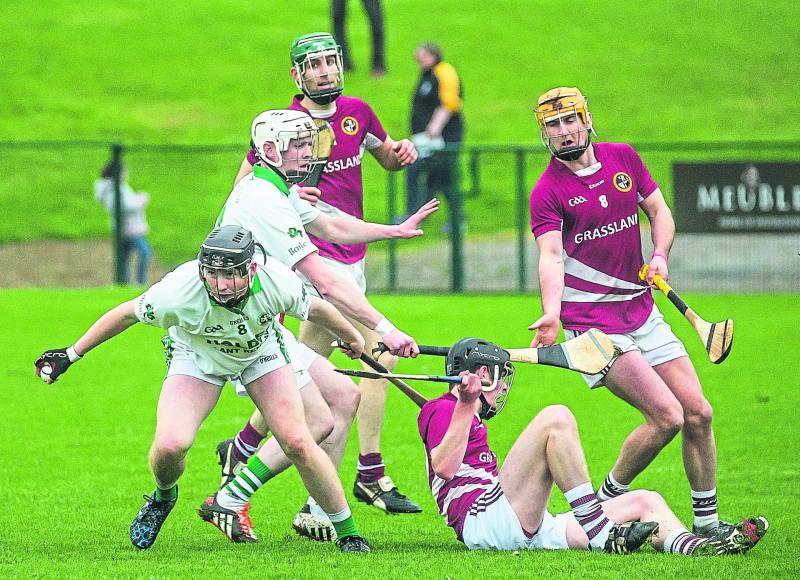 Action from a previous clash between Dicksboro and Ballyhale Shamrocks

The dice has rolled in favour of the so called lesser lights in the Kilkenny senior hurling championship.
With one of the big guns and genuine title contenders, Dicksboro or Ballyhale Shamrocks, set to fall this weekend, the door could easily slip open for an unfancied team to qualify for the county final at least.
This has been a season of much unknown and wonder for clubs, and it looks like it will continue until county final day on Sunday, October 28 at the very least.
Defending champions, Dicksboro, Shamrocks, League champions, James Stephens and O'Loughlin Gaels would be the top four fancies to take the Walsh Cup.
However, the quarter-final draws threw the cat among the pigeons by pitting giants against each other.
That clash will lead to one of the bookies favourites dropping from the race on Sunday.
And if the draw for the semi-finals took an unexpected twist and pitted two of the remaining biggies against each other, then at least one of the county final berths would fall to a so called outsider.
If ever the underdogs needed an incentive to drive on with even more determination, then they have it now.
The summation is all in the realm of ‘perhaps and maybe’ at the moment, but the quarter-final draws definitely tilted things favourably for the underdogs.
And one team that wasn't expected to make the semi-finals on Sunday, October 14 will definitely do so now.
There is no doubt but the meeting of Dicksboro and Shamrocks in John Lockes Park on Sunday is the pick of the quarter-final games.
Both showed terrific form at the weekend. Dicksboro dismissed the challenge of Bennettsbridge in the Shield final without breaking sweat.
Shamrocks did the same against St Patrick's (Ballyragget) in a first round championship clash.
The hurling of both was top notch. Hence the high excitement over Sunday’s clash.
The wonder about whether or not Kilkenny captain, Cillian Buckley, will feature for the ’Boro remains.
The defender is nursing a long term knee injury. He hasn't featured for the club at all this season.
He has been upping things in training, but there has been a setback. There is a small, small chance he might feature at some stage, but it is no more than that.
Meanwhile, Shamrocks had Michael Fennelly togged out and apparently ready for action on Sunday. They introduced five subs, but he wasn't among them.
Here too, he has been a long, long time without competitive action and the club would look set to go with what they have.
The three quarter-finals scheduled - James Stephens play the winners of the Erin's Own/Carrickshock replay in the fourth quarter-final the following Saturday (2pm) - will be played at venues close enough to each other and at staggered times, 12 noon in Danesfort (O'Loughlin's v Clara), 2pm in Thomastown (Mullinavat v Bennettsbridge) and the third in Callan (4.15pm) to give fans a chance to take in all the action, if they so desire.
Mullinavat are hoping that driving centre-back, Simon Aylward, will be fit to face the ’Bridge.
He sat out the weekend win over the Rower-Inistioge with a leg injury. The word was he would be ready for action this week.