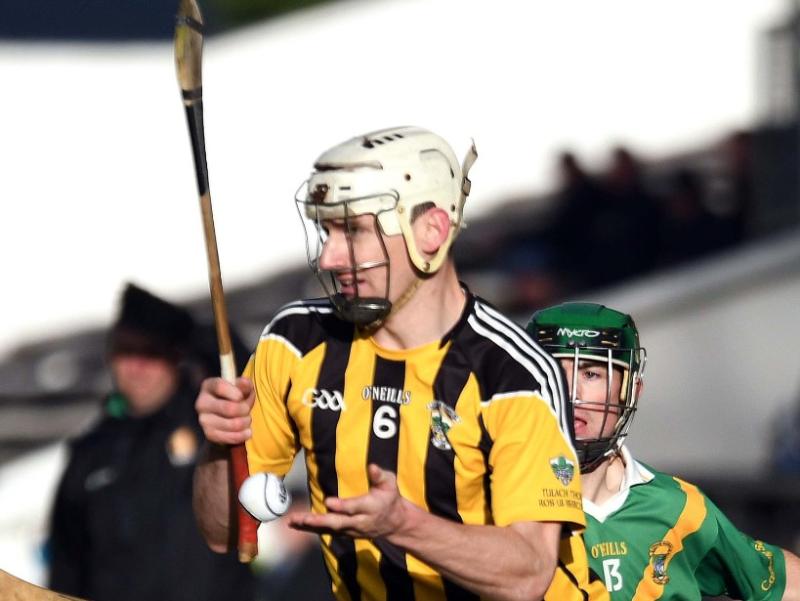 A strong blast of 1-5 without replay between the 41st and 49th minutes set well focused Tullogher Rosbercon on the road to victory over league champions, John Lockes (Callan) in this lively Kilkenny intermediate hurling championship quarter-final in Mooncoin today.
The losers hit half-time a man down and with a slim led of 1-7 to 0-9 after playing with the wind, and they looked in a bit of trouble.
For the next 10 minutes or so the 'Lockes really dug in and gave as good as they got, and the teams hit the 40th minute mark level at 1-9 to 0-12.
Then all of a sudden Tullogher hit the scoring button. Top scorer Cian O'Donoghue lofted a sideline cut from 25 metres on the right over the bar. O'Donoghue added a minor from a free before Conor Hennessy won a long delivery from Moling Cotterell before driving through for a goal from close range.
With the gap suddenly at 1-14 to 1-9 Tullogher relaxed into an easy pattern of play and piled up the points. By the time John Lockes added to their account with a free from James Power the winners had 1-17 registered, and it was more or less game over.
The losers found progress hard during the first half against a well marshalled Tullogher defence in which No. 5 Donnacha O'Connor and Pat Hartley operated almost as twin centre-backs. From time to time one or the other filled the No. 6 role or reverted to sweeping between the two lines of defence, but whatever way they chose to work, it was a success.
The 'Lockes had a man shown a straight red card in the 29th minbute at a time they were behind, 0-9 to 1-5. By the time the rest was called James Power had snatched two points from frees to leave them narrowly ahead.
The 'Lockes were defiant for a while afterwards, but once Tullogher got in front, they thundered ahead for a fine win with the twin defenders, O'Donoghue, Walter Walsh, Cian O'Donoghue and Conor Hennessy massive contributors to the cause.
SCORERS: Tullogher-Rosbercon - Cian O'Donoghue (0-11); Conor Hennessy (1-3); Walter Walsh (0-4); Shane Ryan (0-3); Jason Shiely (0-1). John Lockes - James Power (0-7); Matthew Hollihan, Paddy Kennedy (1-0 each); Robert Kerwick (0-2); Tony Delaney (0-1).