Muckalee chronicle the great sporting achievements in the parish 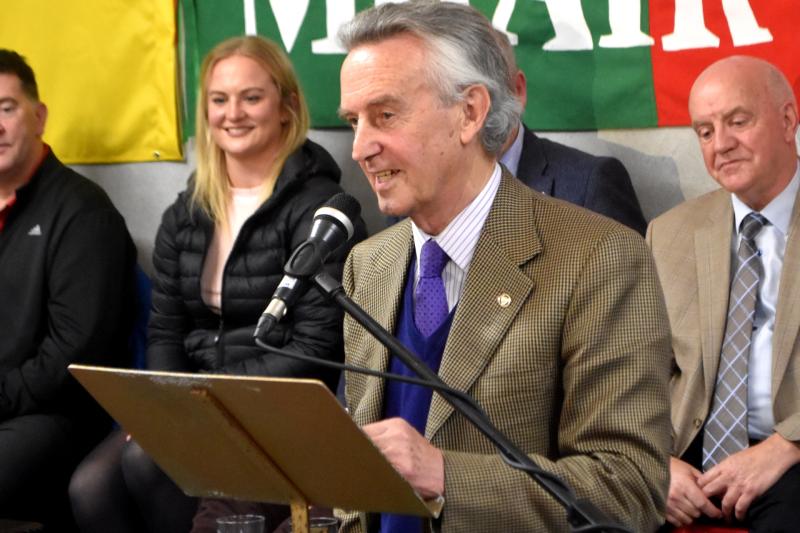 Muckalee Gaelic football club launched their book Muckalee a Sporting Parish, celebrating the centenary of the club, amid great fanfare in the new Muckalee club rooms on Friday night.
It was a night of great entertainment when fond memories were cherished and shared.
Club chairman Lar Maher welcomed the huge crowd and remembered those who could not attend. He had a special mention for the late Fr Martin Ryan, an outstanding member of the club.
Centenary Committee chairman Tony Maher reminded that it was Fr Martin Ryan’s book which was the starting point for this publication, and the undertaking gained momentum once former local teacher, Gerry O’Neill agreed to come on board as editor/author.
He showered the former St Brendan’s national school principal with great praise. He also thanked all who had contributed to the book, in particular members of the committee who had put in a huge and sustained effort since 2016 on the project.
Mr O’Neill suggested he was more of a compiler than author of the book. He heaped huge praise on the committee and said the book would stand up to scrutiny amongst the very best of them.
Fr Ryan pictures
He also pointed out that a number of the pictures were only acquired through Fr Martin Ryan’s videos, which were an invaluable source of material.
MC was former GAA President Nickey Brennan. He kick-started the panel discussion by reading letters from the ’Thirties which highlighted the efforts of some young people in the parish - namely his father - had to make to try and get a playing pitch.
The good natured banter continued during the panel discussion with famous horse trainer, Jim Bolger explaining the art of selling to local auctioneer, Joe Coogan, who was in the crowd.
RTE personality Cyril Farrell stood by his comments from two years ago that he expected it to take another few years for Kilkenny to win an All-Ireland hurling final.
Football guru Colm O’Rourke reminisced about the day Kilkenny played Meath in Navan in 1981, a game which Nickey Brennan played in.
The St Patrick’s school principal spoke about the problems facing players zoning in on the fact that he never hears inter-county players speaking about their enjoyment of the game, only about the sacrifice.
The first of the local heroes to speak was camogie star, Edwina Keane, who was very most when Mr Brennan pointed out how players locally look up to her.
The All Star spoke about how difficult it was to come back from injury, but she was looking forward to 2019.
Former Kilkenny great, Eamon Morrissey, or ‘Eomi’ as he is known, spoke at great length about the joy of pulling on the St Martin’s and Muckalee jerseys, and how he worked through the ranks to make it on to the senior panel for 1984 for the county final win.
The former All Star recalled that his first stint with the county saw him take on Sylvie Loughnane (Galway), and here some funny comments from Cyril Farrell.
Loyal clubman Johnny Brennan, who won an All-Ireland handball title the previous week, was the man who captained St Martin’s during the All-Ireland run of 1985.
Delighted
He said they were only delighted to get a second bite of the cherry in the final as a few player felt they hadn’t played well in the drawn match.
The man with has won in excess of 50 All-Ireland medals pointed out that it was the county final win of 1984 that was particularly sweet.
Nicky Morrissey (Town) spoke about the first county football final win of 1968 and how proud everyone felt.
The club had been waiting a long, long time to win the title and the determination in that panel of players massive.
Probably the most significant thing to be cleared up on the night was Jim Bolger’s address.
He lives in county Kilkenny. He told the audience he decided a long time ago that he wasn’t going to use ‘via Carlow’ on 25 letters a day when he started.
The crowd instantly saw the humour in that, and the hall was engulfed in laughter.
The book is a gem, a history, a reflection of life among proud people in a proud parish.
The books can be acquired from any of the Centenary Committee - Tony Maher, 085-174 1002; Patrick O’Flynn, 083-4631641; Paddy Tynan, 086-2622313; Paddy Morrissey, 085-1741229 or Richard Nolan, 087-641 3713.