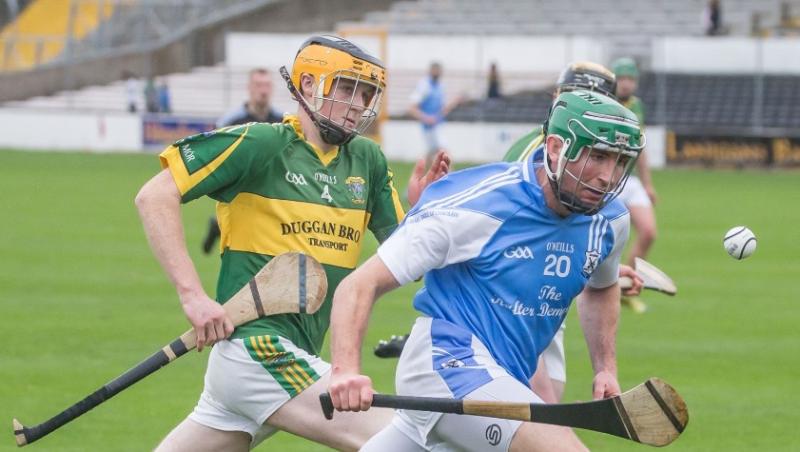 Former Kilkenny great, Eddie Brennan, had looked down the road and seen the possibility. Now it has come to pass.
And on Saturday in Nowlan Park, the eight times Kilkenny All-Ireland medal winner and current Laois team manager, will be doing his level best to down some of the players he will surely be calling to duty for Laois next season.
“The man above has a wicked sense of humour,” laughed the Graigue-Ballycallan attacker about his unusual situation as he also prepares to face one of his Laois selectors, Tommy Fitzgerald, when the Noreside champs lock horns with Portlaoise in the intermediate club hurling final.
“Some of the other lads in Laois are getting a great laugh out of this,” Eddie continued. “It is just one of those things, a little side story.”
Brennan and Fitzgerald have been more central than sideshow for their respective teams as Graigue saw off Celbridge (Kildare) and St Mogue’s (Wexford) and Portlaoise beat Glenealy (Wicklow) and Ballinamere (Offaly) already. Fitzgerald was a star man in the last game when he scored 1-2.
“Once you cross the white lines it is business,” said the 40-year-old Brennan, who has been flying since easing into the season with the club junior side.
The Detective Garda thought the days of playing in a Leinster final, especially at club level, were long gone.
Massive Bonus
“Trying to win the county final was everything,” he insisted. “This is a massive bonus. For me the real satisfaction, because I am involved in the under-age committee and juvenile teams in the club, is seeing the kick the young lads are getting out of this. The young players are getting exposed to a good level of hurling.
“That will benefit them going forward. I take any role I am given. I wasn’t involved in the early part of the year, but now I am looking forward to a Leinster final.”
After the 2017 season Brennan was regraded, and as he said himself, he “hurled away at junior” and enjoyed himself.
Graigue manager, Declan Browne, let things roll, having informed the player he could be calling on him later. Browne eventually did. The rest, as they say, is history.
There is a young heart to the Graigue team, with a good number of their under-21 squad that qualified for the Roinn B county semi-finals involved.
Brennan insisted that all the hurling these players are getting, and especially the varied competition in Leinster, will benefit them hugely for the senior grade in Kilkenny next year.
“There is a good structure to the Leinster campaign in that you are in action every two weeks,” Eddie noted. “There is a limit to what you can do these dark nights. It is not the time of year when you can play your most polished hurling.
“For me it is a brilliant attitude test. Sport in general at this level is down to attitude and how you apply yourself.
“There is maybe a freedom that comes after you win the county final. The big one is the county final. After that the pressure is off, to a degree, and you can hurl with a bit of abandon.
“Portlaoise? They are a very good outfit. They are a senior club who dropped down to Senior B. They have a great tradition in the county. The club was very disappointed to drop down to senior B, but they won it at the first attempt and went straight back up.
“We are under no illusions about the test we are facing. This will be a test of hurling and attitude.”
He said he was getting a real buzz from the young lads around him as he tries “to contribute something.”
“The reason we won the county final was because the young lads just let fly,” he insisted. “Maybe that is the trick. These young lads can be absolutely convinced they can be better for this experience. The more games they get the more they can learn.”
Graigue will be without their stout-hearted defender, James Ryall, because of suspension, and he will surely be a loss.
Graigue-Ballycallan panel - Ciaran Hoyne, Darragh Egan (captain), Bob Murphy, Tommy Ronan, Conor Flynn, Eamon Egan, James Ryall, Shane Butler, Jesse Roberts, Billy Ryan, Eddie Brennan, Conor Murphy, Aaron Brennan, Sean O’Dwyer, Sean Ryan, Richie O’Neill, Richard Keoghan, Dara Walton, Tom Dunphy, Vinnie Teehan, Willie O’Connor, Killian Egan, Padraic Dunphy, Eoin Corcoran, Pat Robinson, Joey Corcoran, Ciaran Hogan, Thomas Ryan, Shane Hennessy, Dermot Ryall, Philip Heafey, Adam O’Brien, Ger Doheny, Peter Murphy, Ger Teehan, Colum Prendiville (inj).
Portlaoise possible - Eoghan Nealon; Joe Geaney, Chris Lynch, Frank Flanagan; Brian Mulligan, Cahir Healy, Ciaran McEvoy; Dean Lynch, Gary Bergin; Tommy Fitzgerald, Colm Gleeson, Cormac Rigney; Keith Murphy, Cian Taylor, Cathal Duggan. Subs used the last day - David O’Mahoney, Aaron Bergin, Lee Davis.