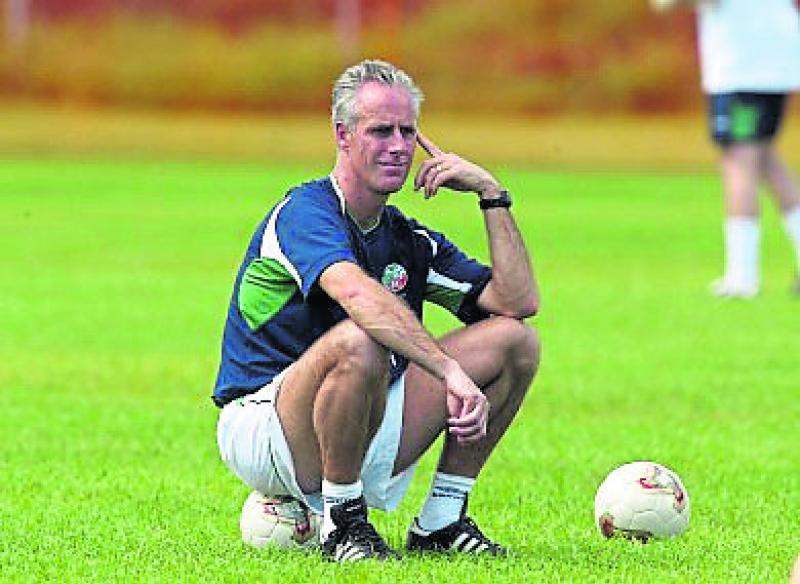 Bad news. You may be punch-drunk after the events of the past week on the Irish soccer front, but that doesn’t mean this page is a safe space for you. It isn’t.
Good news. Instead of being treated to a rehash of the same old opinions from the same old voices, you’re about to be treated to fresh opinions from a fresh voice. Step forward Dec Finnegan, your time has come.
Dec is an estimable fellow with whom I have enjoyed liquid refreshments in venues as exotic as Tbilisi, Bratislava and Hotel Kilkenny.
A Wicklow man, he has been resident in London for decades, is a QPR season ticket holder and is chairman of the London branch of the Irish Soccer Supporters Club. (As an aside, the secretary is Martin Prendergast, whose parents Frank and Helen live in Knocktopher.)
Dec has seen Ireland play around 300 times – the man deserves some kind of award from Michael D – and he was, needless to say, one of the diehards in Aarhus last week.
For the record, even before the announcement of Martin O’Neill’s replacement, he was advocating the appointment of Mick McCarthy for two years, with Lee Carsley as his coach and Stephen Kenny as under-21 manager, the latter to be groomed as McCarthy’s successor.
Not a million miles off, was he?
But this, as Dec points, can only be one element of the necessary twin-track approach. Get the shop window right, yes, but get the shop floor right too.
Tough Call
“It is a tough call for the decision makers. Do they promote and support, especially financially, the domestic game with a view to better development of players for international level? Or do they prioritise having the national team in the limelight and grabbing the attention of the nation, hoping for some positive spin off at the domestic level? Supporters are divided on this.
“Many would like to see the FAI support domestic football more, but in reality in today’s commercial world it is the senior international team that attracts the revenue in terms of television rights, sponsorship, tickets sales and of course revenue from qualifying for the final stages of tournaments.
Aspiration/Reality
“There’s a very fine balance between aspiration and reality and I’m not sure if it ever can be achieved in soccer here in Ireland.”
The FAI, Dec accepts, have invested in both grassroots and access for all with some creditable initiatives. The main problem he sees is how the League of Ireland can be made more attractive to players and fans with suitable marketing, sponsorship and facilities.
“Players’ wages are an issue and the contract levels now being demanded by players are not sustainable, apart from maybe at the top handful of clubs.
“The League of Ireland, as a product, has improved in terms of the standard of football but it is still not attractive enough for locals, other than at the top three or four teams, to support it. A city like Limerick or a big town like Bray ought to be able to sustain a thriving local team but there are more attractive competitors.”
That Martin O’Neill and his sidekick have left the building is, of course, no cause for anything but satisfaction. Although it’s overdoing it to hold that O’Neill’s downfall began when he got thick with Tony O’Donoghue, the incident revealed a side of the man that was none too attractive. How can anyone be mean to Tony O’Donoghue? It’s the equivalent of being rude to a waitress in a restaurant.
Safe Pair Of Hands
Mick McCarthy may be Yorkshire-blunt but he’s not petty. That’s a start. He represents a safe pair of hands who’ll get Ireland playing a more expansive game. That’s a start too. He’ll even make sure Matt Doherty understands his role on the field. Whoa!
On the flipside, his salary is preposterous. It is as though John Delaney cannot prevent himself playing the big man. And the succession arrangement with Stephen Kenny is fraught with obvious hazards.
Too often down the years, however, the FAI have made things up as they went along. In this instance we shouldn’t criticise them for planning for the medium term.
There’s a plan. Amazing. Dec Finnegan is reasonably happy with it. That’ll do for the moment.