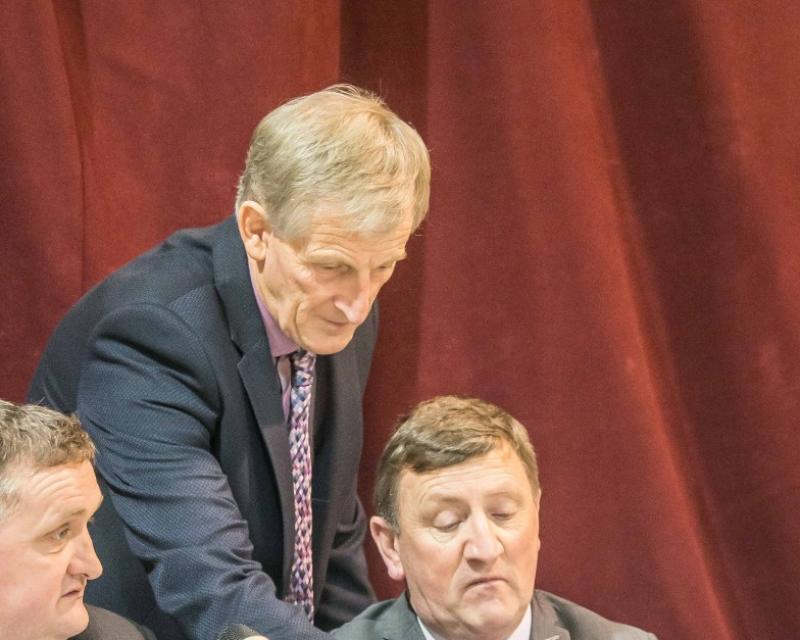 It is time Kilkenny put a well thought succession plan in place, because electing people to positions without they knowing the real demands of the job was no longer an option.
That was the suggestion put before County Board Convention by chairman, Jimmy Walsh, when he delivered his first address in the position in the O’Loughlin Gaels centre.
Mr Walsh looked back on what he felt was “a busy year for the ’Board” when eight of the 11 electable officers were new or took on new positions.
Another one had one year served, he reminded.
Paul Kinsella, St Martin’s (Central Council delegate) and Jim Fennelly, Danesfort (Leinster Council representative) were finishing and entering their final year of service respectively.
“Tonight Jim ends his current role on Leinster Council,” the chairman reminded delegates. “I thank him and Paul for their tremendous service to Kilkenny GAA in so many ways.
“This includes their many years leading Cumann na mBunscoileanna. I wish them the very best in their existing roles and whatever path they will follow in the future.”
New faces
Mr Walsh said that for all the new faces involved, the year was a steep learning curve. The transfer of knowledge took a lot of time whilst ensuring everything was covered and no ball was dropped.
“It went extremely well and brought many learnings, the most important being that a succession or shadowing plan is a priority requirement for the incoming ’Board,” he insisted.
“There is also the need to look at a staggered process where so many positions are not all changing together in the one year.
“Currently succession or linkage is being organised straight up the line between the management of the squads and the county teams.
“We will have to start putting it in place at ’Board level as a matter of urgency,” the Windgap club man insisted.
On the national front there was an unusual perception of what constituted a successful GAA county, Mr Walsh continued.
With 38 clubs participating in adult hurling and 21 in football, along with 11 handball clubs, 31 camogie clubs and 10 burgeoning ladies Gaelic football clubs all catering for a population that was ranked 21st in the country at the last census, Kilkenny was doing extremely well on all fronts.
“I say well done to each and everyone involved,” he continued. ”It is an exceptional performance. It is greatly appreciated across every corner of the county; your communities; your input to county teams, the Kilkenny set up and the national organisation.”
All Kilkenny clubs had dreams to be a Mullinachta or Slaughtneil, but there can be only one winner in each grade.
“In the New Year we have Dunnamaggin, Graigue-Ballycallan and Ballyhale Shamrocks flying the flag at national level,” the chairman reminded. “We wish them every success.
“Their progress in turn ignites the dream in each of our own clubs of winning an elusive county title.
“I have always felt that holding some positions , role or position in any organisation is akin to wearing the team jersey.
“It is an honour and a privilege to be on any team or in any group, and it has to be worked at in every position.
“As we know our clubs and county are only as strong as its individual parts and Cumann na mBunscoileanna, Coiste na nÓg, the Post Primary committee, Coiste Peil, the Junior and the County Board provide the links between both of them.”
He said this was to bring and take information to and from meetings, and as a result full participation in them was crucial.
“This year there are only two contests across all our groups,” he continued.
“I am delighted to see some names coming forward. It is imperative for the good of Kilkenny GAA that more volunteers seek to take on active leadership roles.”
He said in recent times Kilkenny’s committee structure has slipped, and the duties were often being carried out by the group’s chairperson and a small number of others.
The aims
Amongst the aims of committees was the wish to bring in new ideas and personnel; allow people time to test the water, learn the ropes, get experience and deliver added value to each area.
“They were high on the agenda at the start of the year, and slipped with the changing of officers and then further as the playing season got into full swing.
“Some excellent people were approached and showed an interest,” he revealed.
“I say mea culpa that I/we did not complete the tasks and I promise we will pick up on them next year,” he assured.