Respect and caution the key words for Dunnamaggin against Castleblayney 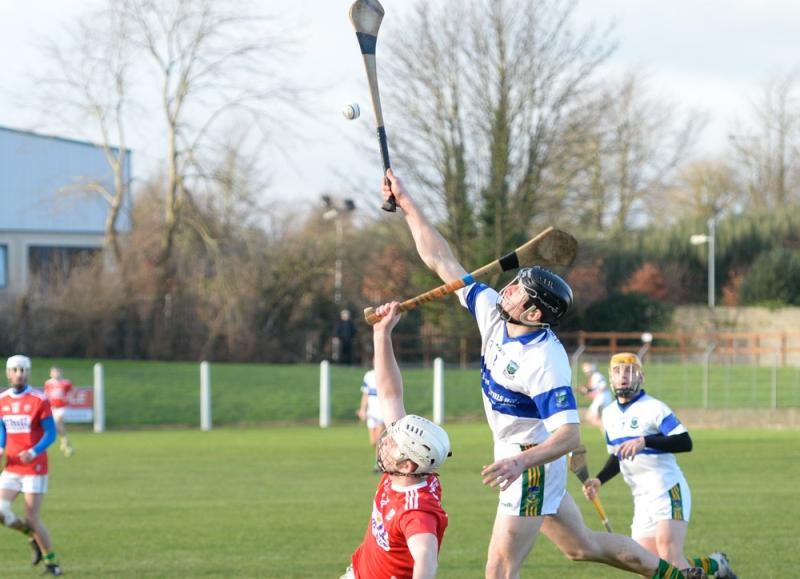 Action from the Dunnamaggin semi-final

Respect will be a key factor when Kilkenny champions, Dunnamaggin, bid to become All-Ireland kings in Croke Park on Sunday.
The South Kilkenny outfit negotiated a testing route through Leinster and an almighty obstacle in the All-Ireland semi-final, and they are red hot favourites to become the eight Kilkenny club to win the junior club hurling national title.
Standing in their way are unfancied Monaghan champions, Castleblayney, who are managed by Ballyragget man, Jimmy Lacey.
Serious concerns
Dunnamaggin have serious concerns about Alan Fitzpatrick, who missed the semi-final with a neck injury. Jack Brett has a tight hamstring, but otherwise they are good to go.
“The players are in a good place,” insisted manager, Eamon Kennedy, when we spoke after he supervised a good work-out in minus three degrees in Danesfort last week.
“We have to treat Castleblayney with absolute respect. They are a good hurling team. One thing is absolutely sure with them. They know how to win, as their serious record in the Monaghan championship confirms.
Good run
“A team on a good run and with a good winning record can be deadly dangerous, no matter where they are from.”
On the face of it, a Kilkenny versus Monaghan hurling game would look a foregone conclusion, just like a Monaghan versus Kilkenny football match would.
And therein lies the danger for Dunnamaggin, to be mentally ready for a match no one expects them to lose.
“Fans and others can look at this final whatever way they like, but it has to be different for the players,” Eamon Kennedy insisted. “Any All-Ireland final is a 50/50 game. It can go either way. Hopefully we can do it.
“The mind has to be right long before you hit Croke Park. The whole day could go horribly wrong, could pass you by if you are not ready for it.”
Worked hard
The Kilkenny champions have worked hard and planned meticulously, and during the 60 minutes on Sunday the players will take charge of their own destiny.
The likes of nine times All-Ireland medal winner, Noel Hickey, Willie Phelan and Michael Cody have enjoyed the Croke Park experience before, and they will be the leaders of a group that has been positive and sure footed since winning the county title.
Stand-out effort
The recent All-Ireland semi-final against Cloughduv (Cork) was the stand-out effort, needing lots of hurling, guts and serious mental strength to get through after extra time.
If Dunnamaggin can go to the well again and produce another effort like that, then Castleblayney will be up against it.
The Northerners live in a football stronghold, but thanks to the exciting exploits of the camain wielders, it is a hurling town of late.
“The place is buzzing,” insisted manager, Jimmy Lacey, who warned that Castleblayney are not going to Croke Park to play a match, but to win an All-Ireland final.
The club won 15 of the last 18 Monaghan championships. Their form slumped in 2017, and few wanted the job as manager.
Jimmy Lacey, the club chairman, stepped in and took over. This time at the third attempt in the All-Ireland semi-finals they grabbed the ticket into their first final.
Hurling mad
There are six hurling clubs in Monaghan, not enough to divide teams into grades, but the hurling mad players see lots of action. Castleblayney won the league and championship in 2018 and then the Ulster championship.
The effort in the latter swelled Mr Lacey's heart with pride. It was all square against Cushendun (Antrim) as the final edged into injury-time.
Cushendun missed two chances to win it. Then free taker Fergal Rafter got a chance for Castleblayney from a free on the sideline, 30 metres from goal.
Under extreme pressure, Rafter nailed it. The losers won the puck-out, but a terrific piece of chasing by a midfielder stopped them scoring again when they got the ball to the opposing '20'.
“That was the most exciting game I was ever at,” Jimmy Lacey recalled. “Fergal's was a great point under extreme pressure.”
He admitted Castleblayney didn't play as well as they can in the All-Ireland sem-final, but they got over the line.
He admitted to feeling a little disappointed afterwards. The biggest crowd ever travelled to support the team, but they didn't see ’Blayney at their best.
“The mood in training is brilliant,” Jimmy said.
“They have nothing to lose playing the Kilkenny champions,” Eamon Kennedy asserted when he took up the story. “Few if any will give them a chance. We have to be ready. If not, we will be beaten.”
Take note lads!