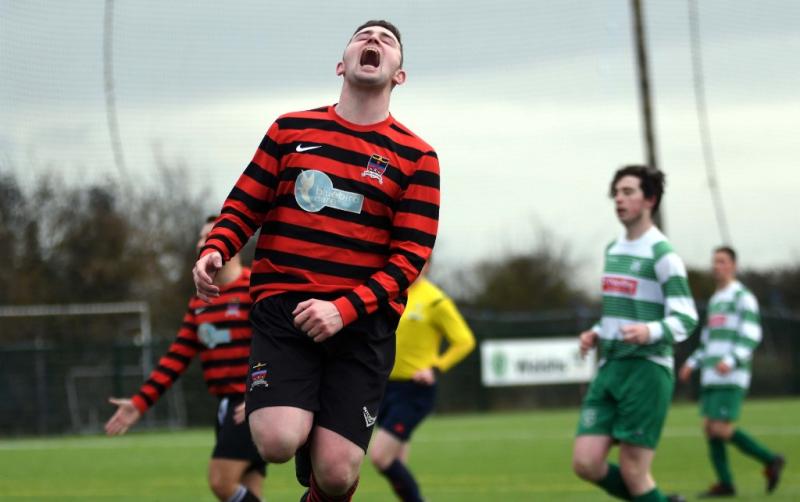 The road to the Aviva Stadium is wide open for Evergreen again this year.
The city side, the last Kilkenny team left standing in junior soccer’s biggest competition, made sure their name went into the hat for the quarter-final draw as they beat Dubliners VEC 3-1 on Sunday afternoon.
The 2017 finalists added another scalp to their Cup collection – they’ve beaten Newpark, St Pat’s Boys, Highview Athletic, Loughrea Rams and Cappry Rovers in this year’s competition – largely thanks to a devastating first half performance.
Fresh from scoring his side’s fourth in their 4-0 win over Clover United last week, Lee Delaney continued his knack of finding the net with a powerful fifth minute strike to warm up the Kells Road crowd.
The defender liked scoring so much, he did it again with 21 minutes on the clock! A good header from Delaney made it 2-0 to the hosts midway through the half.
Evergreen didn’t stop there, extending their lead when Jamie Owens hit the net just after the half hour, curling a delightful free-kick over a six-man wall into the top left corner of the VEC net. That was enough to leave Gary Maher’s side with a comfortable 3-0 lead at half-time.
Pulled goal back
The visitors from the United Churches League did pull a goal back in the second half, but they couldn’t reel in an Evergreen side who were determined not to let their rivals back into the game.
Gary Maher’s side have had a little luck when it comes to the competition draws this year – the furthest they’ve had to travel is Carlow, whereas they’ve entertained sides from Galway and Donegal in successive rounds. They’ll be hoping for another home tie when the quarter-final draw is made.
’Booters end bad run
Freebooters A have certainly put their bad run behind them!
The Blues powered their way back to the top of the Premier Division in devastating fashion as they beat Fort Rangers 9-0 on the Fair Green.
The game was delayed 30 minutes to allow the pitch to thaw fully following heavy overnight frost, but that was the only thing that went against Freebooters as they showed red-hot form to quickly take control of the game.
’Booters were speedily out of the blocks, racing into the lead thanks to an early brace from Conor English. David Grincell, last week’s hero in the 2-1 win over Thomastown United A, got back on the scoresheet before English continued a searing first half performance by wrapping up his hat-trick to make it 4-0.
He didn’t let up, adding his fourth and Freebooters’ fifth from the penalty spot before half-time. There was time for one more from the hosts before the break – given his form it was no surprise to see English on the mark, his fifth making it 6-0 and leaving Fort with a mountain to climb.
The home side continued their scoring form in the second half, stretching their lead through Aidan Nolan, as they romped to a 9-0 win. The result completed a miserable run against ’Booters for Fort – they’ve shipped 20 goals to their top-flight rivals in two league games, scoring none in return.
The win was enough to lift Freebooters back to the top of the table. The division’s top scorers with 31 goals now also have the highest points tally, moving two clear of Highview Athletic A.
As for Highview Athletic, they missed the chance to stay at the top of the Premier Division after their Sunday morning home game against Deen Celtic A was called off due to the weather.
The cold conditions that gripped Kilkenny on Sunday hit the Graig side after icy roads put paid to their hopes of winning their fifth game in six (the 2-2 draw with Fort Rangers was the only blip on their league record since losing 2-1 to Freebooters A back in October).
Double aim
Division One champions-elect Bridge United A kept their hopes of a League and Cup double alive when they beat Freebooters B 2-0 in the opening game of the Billy Leahy Memorial Cup.
Bridge, who have been in seriously impressive form, hit the visitors with a first half one-two to all but seal their place in the next round. Sean Murphy and Adam Farrell found the back of the net to make it 2-0 by the break. Their reward is a home semi-final against Spa United, who earned a bye in the quarter-finals.
The other Division One Cup game to survive the weather saw Callan United get the better of Evergreen C, but only after their tie went all the way. Locked on a 2-2 score line extra-time couldn’t separate the sides but a penalty shootout, which Callan won 4-2 with Dylan Roche making a vital save, did the trick. They will play the winners of the Stoneyford United v Thomastown United B tie in the final four.
Freshford win
Freshford Town A were big winners on Sunday as they made a high-scoring start to their Division Two Ken & Michael Byrne Cup campaign.
The Woodview side showed they knew the way to the net as they beat Brookville 6-3 in the local derby.
Jordan Burke led the way with a brace for the winners, who also had Shane Donnelly, Donnacha Grey, Aaron Fogarty and John Campion on the scoresheet.
Freshford will play the winners of the Castlewarren Celtic v River Rangers tie in the semi-finals. That game was called off on account of the icy weather on Sunday morning.
Newpark A are also in the final four after beating Evergreen 46. It was a good result for the boys from the Fen, who slipped from pole position in the league title race following successive losses to Freshford Town and Ormonde Villa.
They will face either East End United or Ormonde Villa in the semi-finals.