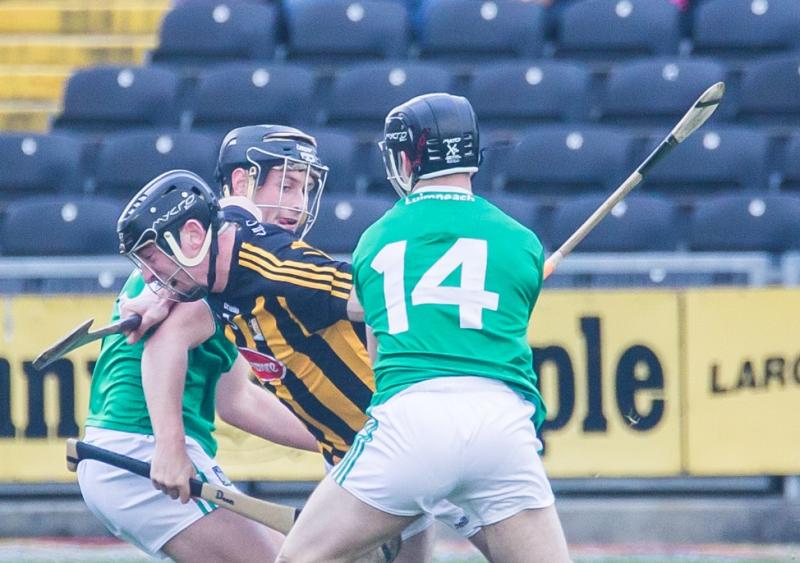 Enda Morrissey tries to break out of the Kilkenny defence but his way is blocked Picture: Pat Moore

Kilkenny got a sharp and harsh reminder of the scale of the mountain they must climb if they are to get back to the top level in hurling when put to the sword by hugely impressive All-Ireland champions, Limerick in the Allianz National League in Nowlan Park today.

The Shannonsiders hit the home side for 2-3 without reply during the closing five minutes of the opening half to open out a comfortable 2-10 to 0-7 interval lead.

That was a crucial stage and break in determining the outcome of the match. However, the way Limerick drove on, retained possession to bring their strong running game into play afterwards to leave Kilkenny chasing shadows at times suggested they will be around when the real business end of the season is reached.

Kilkenny opened well attacking the City end goal and playing against the strong wind. While it was more or less score for score all the way, the Cats played well and did most of the leading.

Limerick hit the front for the first time when the excellent forward charging defender, Tom Condon set-up Conor Boylan for a point to edge them 0-7 to 0-6 clear in the 28th minute.

The home side got back level when a foul on John Donnelly was punished by free taker Richie Leahy, but from there to the rest Limerick battered the opposition.

They opened a blast that saw them score 2-3 without reply with a point from Robbie Hanley. Within 90 seconds Shane Dowling had the ball in the net following an assist by Aaron Gillane.

And 30 seconds further on the Shannonsiders intercepted a short puck-out by Kilkenny and the ball ended up in their net, Conor Boylan scoring this time.

With the addition of points from Diarmuid Byrne and Gillane, Limerick took a strong 2-10 to 0-7 lead into the break.

Kilkenny didn’t get a chance to try and harness the benefit of the wind after the turn because the opposition continued their strong scoring drive. Limerick were able to worked the ball very well from defence to attack.

Limerick opened the new half with unanswered points from Aaron Gillane (three frees) and Barry Murphy to stretched their advantage to a huge 2-14 to 0-7 by the 41st minute.

Kilkenny huffed and puffed a lot afterwards, but they never looked like pulling back opposition who ran up their third win of the campaign.

His counterpart, Brian Cody suggested: "We are playing the best team in the country and there is plenty to learn from it."