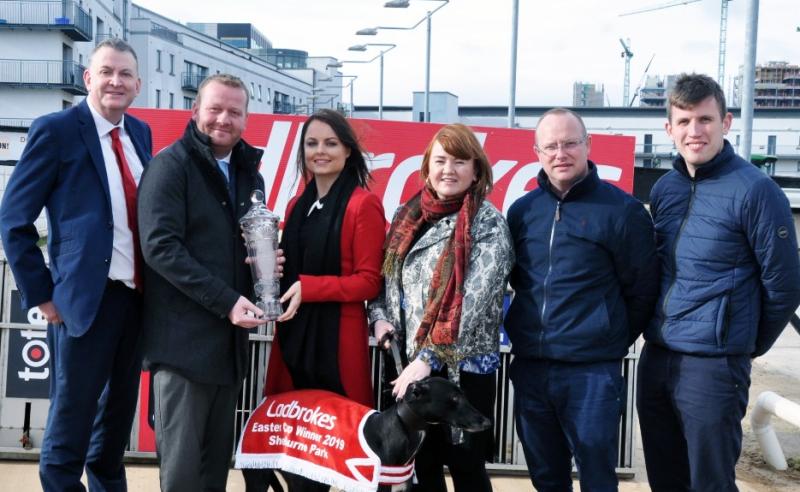 Just 24 greyhounds remain in the race for the Ladbrokes Easter Cup in Shelbourne Park as the event enters the second round weekend.
A number of Kilkenny-trained greyhounds are still in with chances.

Priceless Blake, Jaytee Jerry and Princess Verona, all kennelled by Gowran-based trainer Paul Hennessey, have all made it through their first round heats.
Two of the Hennessy runners have been drawn together in the Heat 2 on Saturday.
Four heats will be run on Saturday night’s card, with the first three from each progressing to next weekend’s semi-finals.
Derby runner-up Magical Bale posted the quickest time in the first round heats (29.45), with fellow 2018 Derby finalists Clona Blaze, Slippy Cian and Ballyanne Sim also among those to make it through to the second round.
Priceless Blake runs in the same heat as Magical Bale, with Jaytee Jerry and Princess Verona pitted against each other in the same race.
The competition, run over 550 yards, traditionally attracts the top Irish greyhounds in training, with this year’s winner receiving €25,000.
Patrick Flynn, sales, commercial and operations manager at Shelbourne Park, said the first round heats of the Ladbrokes Easter Cup had everything, with plenty of thrills and spills amid the high quality greyhound racing.
“We’re sure the second round will provide the same this Saturday,” he added. “I have no doubt the excitement will only increase as we reach the closing stages of the competition. I want to wish the best of luck to all still involved.”
The Ladbrokes Easter Cup is one of 14 ‘Classic’ races in the Irish greyhound calendar and one of six to be held in Shelbourne Park, along with the Irish Greyhound Derby among others.
The final of the competition will be on Saturday, March 9.
Heat 1 - 1 Magical Bale; 2 Beaming Paradise; 3 Akelware; 4 Cushie Jet; 5 Priceless Blake; 6 Urban Jet.
Heat 2 - 1 Jaytee Jerry; 2 Lenson Blinder; 3 Gurteen Feather; 4 Ballymac Anton; 5 Priceless Verona; 6 Kilgraney Master.