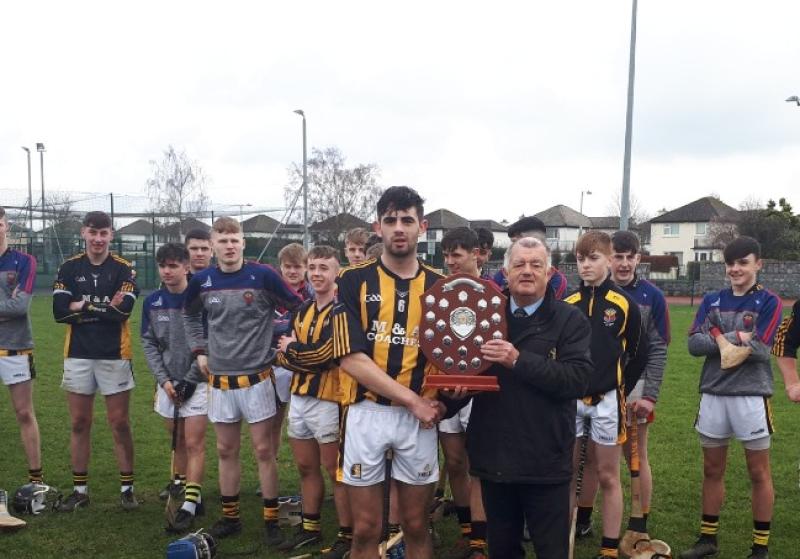 Leaders by 13 points at the interval, Castlecomer Community School had to hang on for dear life at the finish before docking in safety and claiming their second title in the Leinster post primary schools ‘Rest of Leinster’ senior hurling Roinn B final in Carlow IT today.

The Noresiders had to defend their line against three frees at the finish of normal time and into additional time when the gap started at three points. However, defending All-Ireland champions, Colaiste Choilm Tullarmore (Offaly) could only pull back one score as the Castlecomer side won through to the All-Ireland semi-finals.

The semi-final will be played next weekend, but the venue and opposition are unknown at the time of writing.

The winners were sure firing and impressive during the opening half when backed by the stiff wind. They lashed over unanswered points by the flying Jack Buggy (2), Michael Doyle and Jack Morrissey during the opening eight minutes to get a strong foothold in the match.

When they added two goals within as many minutes midway through the half the Tullamore side looked in real trouble.

The first goal arrived in the 14th minute when a long ball from midfield by Declan Buggy went all the way to the net as Jack Morrissey troubled the defence near the edge of the square. Morrissey cracked home the second goal after great work by Thomas Brennan.

Those big strikes helped fire Castlecomer into a strong interval lead of 2-11 to 0-4, although the scoreboard read one point less to the winners. The referee confirmed the 2-11 haul, however.

Colaiste Choilm roared into action after the turn. A string of points from Brian Duignan were added to by a goal from Stephen Fitzgerald in the 41st minute to cut the gap to 1-9 to 2-11.

When Fitzgerald and Tullamore struck for another goal on 45 minutes, the gap was suddenly down to 2-11 to 2-9 and Castlecomer backs were to the wall.

The Kilkenny lads simply dug in and hurled their way out of trouble. Jack Buggy rifled over a point from a testing free from the right in the 47th minute, their first score of the half.

They followed with another small score from Jack Morrissey. Ronan Shore added to the gains within seconds. And when Thomas Brennan pulled over-head on a lone free out of defence by the powerful James Brennan to bury the ball in the net for Castlecomer, suddenly they were flying again when 3-14 to 2-9 clear.

Tullamore’s next score was a goal, and to their credit they never gave up, but the battling Kilkenny boys help on for a thrilling victory.