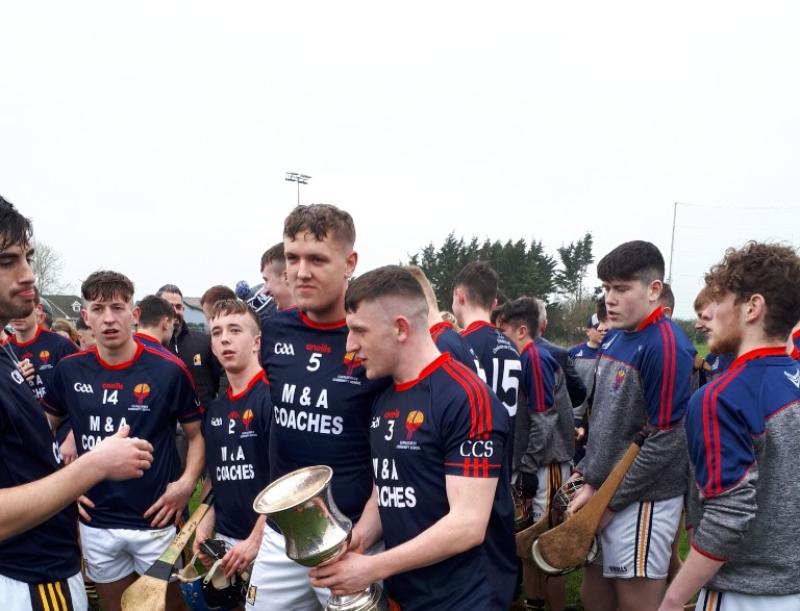 A superb half-back line that didn’t give the opposition a look in provided the ammunition for a sure firing Castlecomer Community School attack to wreak havoc when the North Kilkenny school raced to an easy victory in the Leinster post primary schools senior hurling ‘B’ final in Hawkfield, Newbridge today.

St Benildus College (Dublin) were never given a look in as Castlecomer snatched the ticket into the All-Ireland semi-final against Rochestown (Cork) next weekend.

The winners grabbed hold of the game from the off. Deadly striker Jack Buggy, who finished with 11 points to his credit,registered five times during the opening 11 minutes as the winners put their mark on things from an early stage.

St Benildus were dealt a serious blow in the 12th minutes when they conceded a goal. Dean Bray launched the attack, but when the losers goalie was loose in his control of the ball Jack Buggy stole it from him.

A quick transfer into the centre found Jack Morrissey, who lashed the ball home from eight metres.

The losers were already 1-5 to no score behind, and as they got no change out of the Castlecomer half-back line of team captain, James Brennan at centre-back and strong wing men, Chris Korff and Dan Coogan, they never got the chance to threaten the Kilkenny school’s goal.

Castlecomer roared away into an interval lead of 1-10 to 1-1, and it was more of the same after the change of ends.

The game was put to bed in the 39th minute when Castlecomer scored a good goal. Eoin Cahill did well to work the ball in from midfield before Ciaran Cooney used his strength and speed well to win possession before rifling to the net.