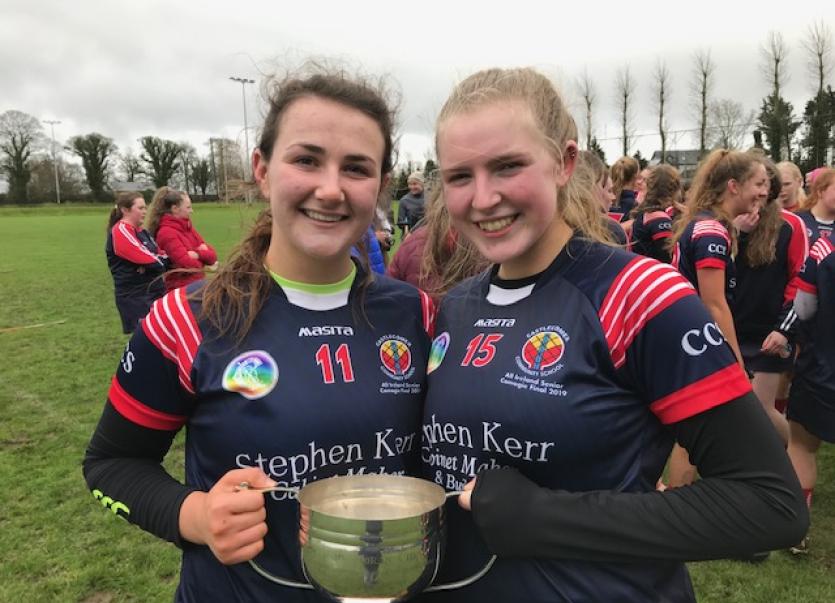 Castlecomer Community School completed a big camogie/hurling double at the weekend when their senior teams won the camogie All-Ireland ‘B’ title and the hurlers won the Leinster ‘B’ crown.

The camogie team grabbed the second part of the double on Saturday in Banagher when out-classing St Mary’s, Nenagh in the Masita All-Ireland colleges post primary schools senior ‘B’ final. The hurlers beat St Benildus College (Dublin) in the Leinster final on Friday.

Castlecomer finished with a strong scoring blast to take the honours.

St Mary’s made good use of the breeze early on, and for 20 minutes or so they pinned the opposition in their own half. Points from Rebecca Forde, Mary Flaherty and Caroline Brown (2) took them 0-4 to no score ahead by the end of the opening quarter.

Castlecomer moved full-forward Meadbh Walsh back to support their defence and midfield and this helped them cope better.

The Cats were more in the game in the second quarter and they opened their account when Grace Mulhall pointed a close in free. Caroline Brown hit back for the losers.

Close to the call for half-time Castlecomer pulled back a goal through Amy Brennan. St Mary’s reacted smartly and Caroline Brown pointed a free from 50 metres, but the Kilkenny school closed out the half with a point from Grace Mulhall to leave the minimum between them.

Within five minutes of the restart it was level, but St Mary’s dug in, and they surrendered little for a long time afterwards.

When the losers regained the lead through Caroline Browne at the start of the final quarter, they really took the challenge to Castlecomer.

The Kilkenny girls dug deep, upped the effort and charged on. They got in front for the first time in the 54th minute when Meadbh Walsh pointed. Then Carlise Comerford pointed a free.

The next score came after Meadbh Walsh worked the ball forward and Grace Mulhall did well to react when it broke and she tipped it into the St Mary’s net. That was the decisive score.