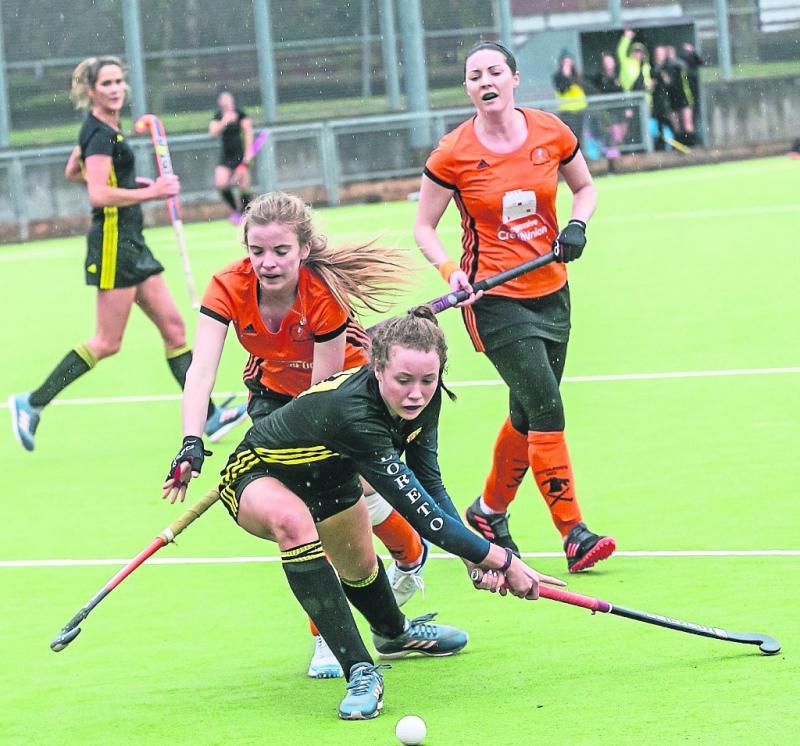 The Kilkenny ladies first team wrapped up the Leinster League Division 4 title with a solid and hard-fought win over Skerries.
With the rain pouring down at Kilkenny College it was set to be tough match - and that’s exactly what flowed.
The game began with Skerries, Kilkenny’s closest rivals in the table, taking the ball and forcing pressure on the Kilkenny defenders. However, the attacks from the Dublin side were no match for a strong Kilkenny defence consisting of former Irish captain Linda Caulfield, captain Niamh Spratt, Ciara Clarke and Lainey Gilsenan.
The home side were quick to flex their muscles in attack, as powerful runs along the right side of the pitch from Ally Carter set up some great opportunities for Kilkenny’s forwards to get on the scoreboard.
Midfielders Catriona Carey, Laura O’Neill and Sinead Connery worked simultaneously to create some superb chances up front for Paula Farrell, Carter and Laura Walshe.
The Kilkenny defence was tested by Skerries at times, but with great tackles from Sue Shirley the ball was kept away from the goal. Ciara Clarke and Abby Gilsenan worked tirelessly in defence to slow down the Skerries forwards and win back the ball. Remarkable hit outs from Niamh Spratt gave Ally Carter and Lainey Gilsenan the chance to utilize their speed up the wings.
A super display of skill from Sinead Connery on the right left a gap for Aisling McGrath in the centre who won Kilkenny’s first short corner. The game was tight at half-time with everything still to play for.
Kilkenny were just as convincing in the second half as they took to the pitch and showed no mercy to the opposition. Brilliant runs from Aine Buggy and Abby Gilsenan up front exposed the Skerries defence and yet again Kilkenny won a short corner.
This time Kilkenny made no mistake, Sinead Connery hammering the ball into the back of the net.
From here Kilkenny pushed on, Catriona Carey leading the way with a dominant display in midfield. Super saves from Searlait Doyle in goal kept Kilkenny in the lead.
Linda Caulfield distributed the ball brilliantly out of defence giving Laura O’Neill the opportunity to exploit the Skerries defence and give the ball to Abby Gilsenan and Aisling McGrath who danced around numerous Skerries defenders, while Laura Walshe tracked down every ball in midfield, giving the opposition no chance to counter attack.
Any opportunity Skerries did get was crushed by the solid tackles from Lainey Gilsenan and Sue Shirley. It was a fitting performance from Kilkenny, who recorded a remarkable 16th straight win to secure the title of the Division Four league champions. An outstanding performance from Linda Caulfield also earned her ‘Queen Of The Match’, marking her incredible return to hockey.
The team will be hoping to continue their unbeaten streak in the league when they travel to Dublin to play Botanic on Saturday at 12 noon.
Kilkenny Firsts: Catriona Carey (coach/player), Ciara Clarke, Linda Caulfield, Searlait Doyle, Lainey Gilsenan, Ally Carter, Abby Gilsenan, Aisling McGrath, Niamh Spratt, Laura Walshe, Sue Shirley, Paula Farrell, Laura O’Neill, Aine Buggy.