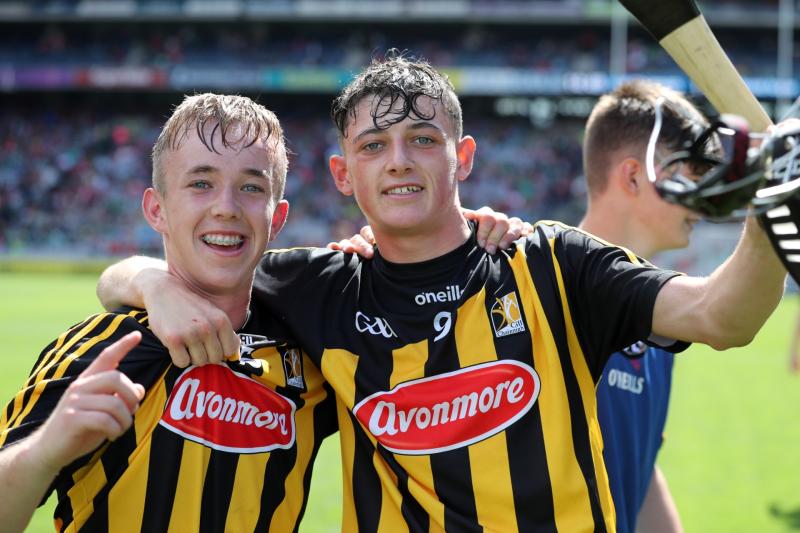 Jack Buggy (left) was a key man in the Castlecomer attack

The roller-coaster run of success for Castlecomer Community School continues. The North Kilkenny outfit qualified for another All-Ireland final yesterday when their senior hurlers beat St Francis College, Rochestown (Cork) in WIT to qualify for the Masita All-Ireland ‘B’ final.

Last weekend the school won the All-Ireland ‘B’ senior camogie final and Leinster hurling ‘B’ final, so now they are hoping to complete the big hurling/camogie double. Standing in the way are St Raphael’s College, Loughrea.

Rochestown opened their account through Alan Connolly at the end of the first quarter. Castlecomer kept charging forward. Buggy kept the scoreboard ticking over but it wasn’t until Ciaran Cooney slammed home a goal in extra time at the end of the half that they looked any way comfortable when nine points ahead.

The second half action opened with a rush of goals, two for Rochestown by Paul O’Riordan and Alan Connolly, with one for ’Comer in between from Declan Buggy.

The losers appeared to be gathering a head of stem when they had a player sent off. That incident took a lot of momentum out of their game and when Castlecomer nipped points by Ciaran Cooney and Jack Morrissey they snatched back control.

The winners were heading up the high road to victory minutes later when Cooney crashed a fine shot to the net. Rochestown did fight back and they scored a third goal, but the Cats landed late points by Ciaran Cooney and Thomas Brennan to seal the deal.