Fennelly set to take a long break from hurling now 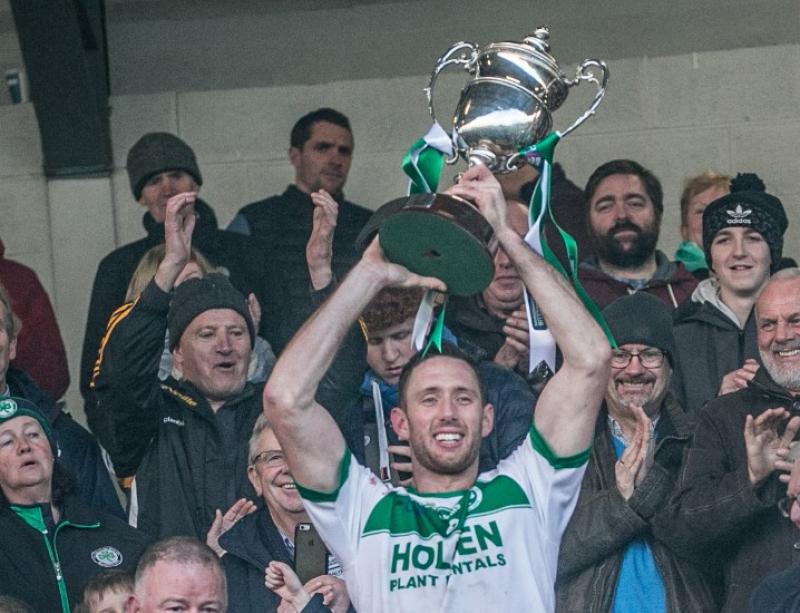 Michael Fennelly completed a huge double as captain on Sunday when leading Ballyhale Shamrocks to All-Ireland victory, an honour he also enjoyed with Kilkenny in 2009.
The centre-back on the team was thrilled with the victory, and with the high class performance of a team that has progressed almost beyond belief over the past 12 months or so.
However, Fennelly will take a well earned rest from hurling now and let the younger brigade get on with things when the Kilkenny league/championship commences next month.
“The whole thing is surreal,” Fennelly gasped as he tried to take in the joy of the latest triumph. “It is a great honour for me to be the seventh Shamrocks captain to lift the trophy. The competition is going since 1971 and we are top of the table. That is nice.”
There is a huge Fennelly tradition with regard to Shamrocks and the club All-Ireland, and he was thrilled to help add one more chapter.
He said he was delighted at 34 years of age to captain the team to victory. He had issues with his knees in the run up to the match, but he insisted he was always going to play.
“It was all about how long I would last,” he smiled. “The lads put the foot on the pedal in the second half and thankfully I was able to see the game out to the finish. It was nice to lead the team up the steps of the Hogan Stand.”
Michael felt Shamrocks were hurling at their easy during a lot of the second half. Their approach had been a bit like Kilkenny.
“You hit the opposition hard in the third quarter and hammer home your advantage,” he said of the thinking behind the scenes. “I remember the 2017 semi-final in Kilkenny against James Stephens we were six points up at half time and ended up being beaten by nine.
“Henry (Shefflin) mentioned that in the dressing-room during the interval. He told us to be careful, be very careful. Even though we didn’t start the second half all that well, we didn’t concede much to St Thomas.
“The half forwards were flying. They were winning one-on-one balls. When you are winning possession like that you are in control of the game.”
Colin Fennelly, his brother, was in terrific form, it was suggested to him. He agreed and referred back to the semi-final against Ballygunner (Waterford) when Colin’s hooking and blocking were absolutely terrific.
“That is a huge part of his game that people don’t see,” he continued. “Today he got the scores. There was good ball going into him. That was our focus, to get ball into him.
“He is physically strong, especially at club level. Today he got some great scores and he deserve to be acclaimed as man of the match. I am sure he is looking forward to getting back playing with Kilkenny.”
Fennelly said there was a lovely mix of young and experienced players in the Shamrocks squad. There was skill, strength and size too.
“They younger lads are nice hurlers,” was his summary. “They have a good attitude. Hopefully we might see one or two of them break into the Kilkenny team this year.”
Of course, the influence new manager and former Kilkenny and Shamrocks star, Henry Shefflin brought to the brought to the situation was huge, the captain insisted.
“He knows the game and everyone listens to him,” Fennelly said. “Henry and his backroom team have been very, very strong all season from Tommy (Shefflin) training us to Richie O’Neill bringing a special knowledge on things like the puck-out; Patrick Phelan working hard and James Fitzgerald doing the stats. They, and others, all worked very hard for the good of the club.”
Now that the All-Ireland series was over, Fennelly could get back to domestic duties. He and his wife, Leslie, have a young baby and Michael, because of the hurling, got a free pass in recent times.
“I think I have a bit of babysitting to do now,” he laughed. “Leslie had been getting hammered on the night shifts. She has been doing the heavy lifting, so my turn has come.”