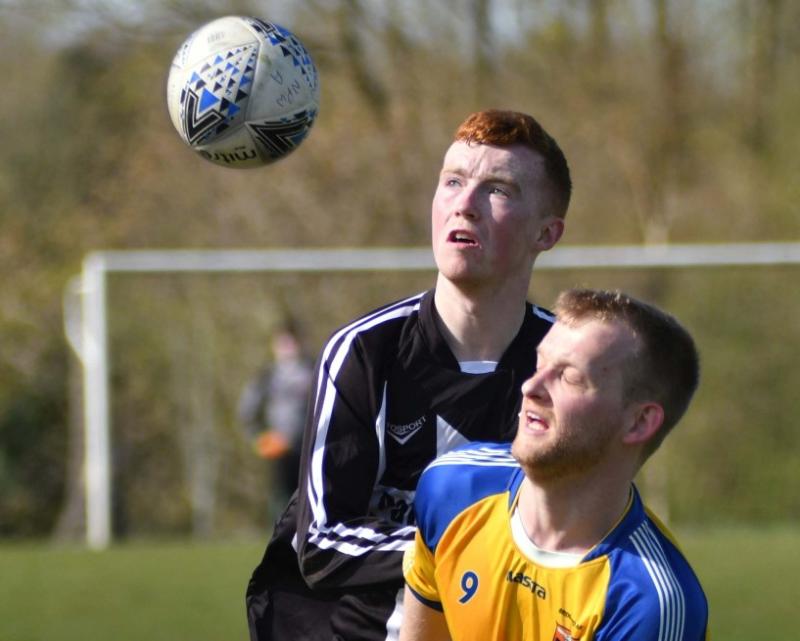 Marty Dalton (Bridge United A) and Patrick Clifford (Newpark A) keep their eye on the ball PICTURE: MICHAEL BROPHY

Thomastown United’s A team were the biggest casualties of the weekend as they exited this year’s McCalmont Cup.

United, finalists in the last three seasons, saw this term’s campaign cut short as they fell to a Conor English brace when Freebooters A came to United Park on Sunday.

English bagged a goal in either half, the winner coming seven minutes from time, as ’Booters put their name in the hat for the quarter-final draw.

Elsewhere champions Evergreen A cruised into the last eight with a 6-0 win over East End United. Sean Barcoe led the way for the cup holders, helping himself to a hat-trick in Bennettsbridge, while Fort Rangers beat Highview Athletic B 4-0 in Buckley Park.

Highview Athletic’s A team were the biggest winners on a busy weekend of Cup action. The Graig side, who won the Maher Shield last week, beat Tullaroan 8-0 with Dean Broaders bagging four of their haul.

There was also a hat-trick for River Rangers to celebrate, as Cathal Dermody helped himself to a treble in their 6-3 win over Bridge United B. It was a bad weekend for the Goresbridge club, as their A team were beaten 4-2 by Newpark A, who had Henry O’Neill (2) among their scorers. Callan United were given a walkover by Spa United.

The last quarter-final place will be decided when Evergreen B take on Ormonde Villa this weekend.

Thomastown United A 1, Freebooters A 2.

Under-14 Bennettsbridge Parts League Division 1A

Under-12 Glanbia League Division 1A

Under-12 Glanbia League Division 2A