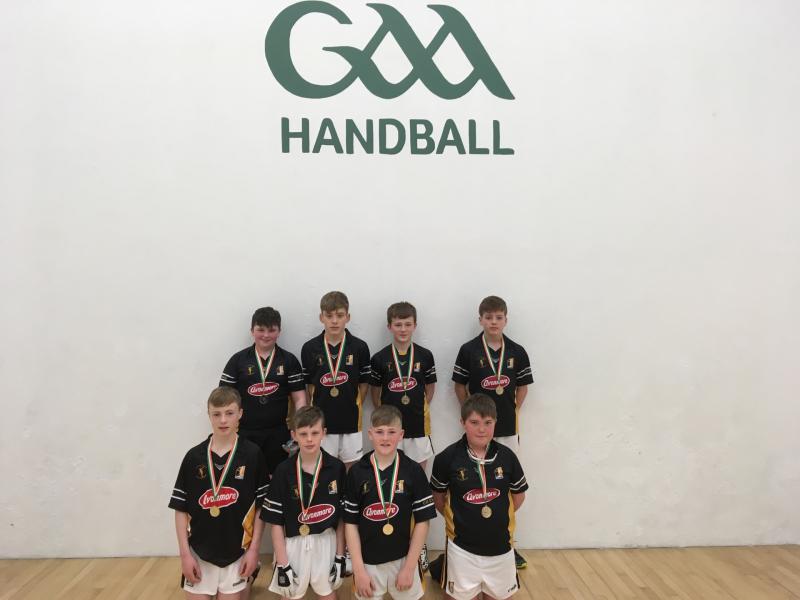 The Kilkenny under-12/13 Team of Six won the 40x20 All-Ireland handball title in style at O’Loughlin’s on Saturday when they easily defeated Cork and Tyrone.
In their semi-final match against the Munster champions, the Kilkenny boys were in devastating form.
They won all six games when recording a 90-27 victory.
Their opponents in the final were Tyrone, who got a walk over from the Connacht champions, Mayo.
Having played a semi-final proved no disadvantage to the Noresiders as they dominated from the start.
There was no let up as the dominant Kilkenny players were in no mood to allow the opposition any chance.
Winning all six games again, there was no doubt who was the superior team as Kilkenny sealed the win on a 90-23 score line.
All eight members of the squad had the opportunity to contribute to this great win in what was Kilkenny’s fourth victory in the competition in the last five years.
The victorious Kilkenny squad was Anthony Clifford and James Kenny (Talbot’s Inch), Bobby Brennan (Clogh), Sean Morrissey (O’Loughlin’s), Conor Doyle (Windgap), Niall Drennan (Galmoy), Cathal Buckley and John Hayes (Kells).
Elsewhere the Funchion brothers bid for glory in the All-Ireland senior doubles championship ended with defeat to Galway siblings, Martin and Diarmuid Mulkerrins.
The Kells duo, Patrick and Peter Funchion, won the first set 21-8. However, they lost the second game 21-10 and in a hard fought third set the Mulkerrins won 21-20.
Semi-finals weekend
This Saturday at Kingscourt the Kilkenny duo, Ciara Mahon and Aoife Holden play Roscommon sisters, Fiona and Siobhan Tully in the All-Ireland ladies doubles semi-final.
The winners face Cork or Kildare in the final in two week’s time.
Also this weekend the All-Ireland doubles semi-finals are scheduled to be played with the Leinster champions facing the Munster winners.
First up are Kells pair, Eoin Brennan and Connor Murphy, who play Tipperary in the under-21 semi-final at a Kilkenny venue.
There is also home advantage for Jack Holden (Kilfane) and Jack Doyle (Windgap) in minor doubles with Clare on Saturday.
In Over 35B, Anthony Martin and Diarmuid Martin (Kells) take on Waterford at O’Loughlin’s on Sunday morning, and this is followed by the junior B doublers clash involving Eamonn Hawe and Sean Foley (Windgap), who face Tipperary.
There is a trip to Nenagh for the ladies junior B doubles pair, Dearbhail O’Keeffe (Kilfane) and Sorcha Delaney (Clogh) as they travel to play the host county on Sunday afternoon.
Upcoming events
As the 40x20 season draws to a close the next few weeks are busy with All-Ireland finals and Irish nationals qualifiers to be decided.
The winners of this weekend’s semi-final matches will contest the All-Ireland doubles festival in Kingscourt on the weekend of April 27/28.
In between the qualifying matches for the juvenile nationals will be decided at various venues around the country.
The juvenile nationals will be played in Tyrone and Monaghan on May 11 and 12.
In May the hardball championships will be played, depending on the number of entries in each grade.
Fixtures
All-Ireland semi-finals O’Neills ladies senior doubles championship fixtures:
Saturday - semi-finals in Kingscourt: SF1, Cork (Catriona Casey/Aisling O’Keeffe) v Kildare (Leah Doyle/Mollie Dagg); SF2, Kilkenny (Ciara Mahon/Aoife Holden) v Roscommon (Fiona and Siobhan Tully).
Saturday at O’Loughlin’s, Kilkenny (12noon) MD Kilkenny (Jack Holden/Jack Doyle) v Clare (Mark Rodgers/Mark Crehan).
Sunday at O’Loughlin’s, Kilkenny (11am) Over 35BD, Kilkenny (Diarmuid Burke/Anthony Martin) v Waterford (Gary McCarthy/Philip Butler); JBD Kilkenny (Sean Foley/Eamonn Hawe) v Tipperary (Aidan O’ Flaherty/Liam Bradshaw)
Nenagh, Tipperary (1pm) LJBD Tipperary (Eleanor Percy/Sile Spain) v Kilkenny (Dearbhail O’Keeffe/Sorcha Delaney).