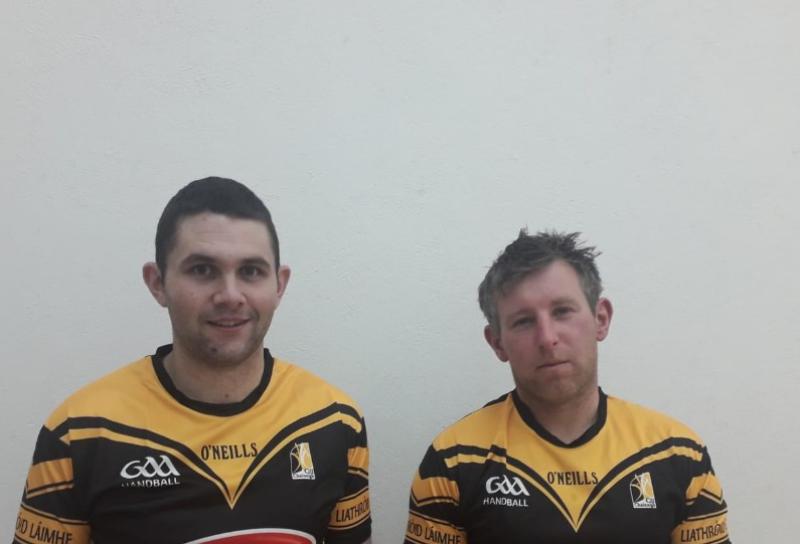 Following the completion of the All-Ireland handball doubles semi-finals during the week, the county can now look forward with considerable confidence to playing in finals in Kingscourt at the end of the month.
The first semi-final that was due to be decided was in the under-21 doubles grade where Eoin Brennan and Connor Murphy (Kells) were to play Tipperary.
Unfortunately this match was not played as the Munster champions conceded a walk over. The Kilkenny pair will now play the decider against Galway.
In the ladies senior doubles encounter in Leixlip on Wednesday night, Ciara Mahon (Clogh) and Aoife Holden (Kilfane) lost to Roscommon sisters, Fiona and Siobhan Tully, in two sets 21-18, 21-9.
The action then switched to O’Loughlin’s on Saturday and Sunday.
First up on Saturday were the Kilkenny minor doubles pairing of Jack Holden (Kilfane) and Jack Doyle (Windgap), who faced Clare’s Mark Rodgers and Mark Crehan.
There was no stopping the Kilkenny duo on home soil. They easily defeated the Munster boys 21-4, 21-9.
They will now play Monaghan in the final.
On Sunday the action returned to the Kilkenny city court where the county contested two more All-Ireland semi-finals in over 35 B doubles and junior B doubles.
In the opening match, the over 35 B doubles, the Kells pair Anthony Martin and Diarmuid Burke had a tough clash with Waterford’s Gary McCarthy and Philip Butler.
After two close games Anthony and Diarmuid ground out a win when getting through 21-15 and 21-19 to progress to the decider against Antrim in Kingscourt.
There was disappointment for Windgap duo, Eamonn Hawe and Sean Foley. In the junior B doubles contest with Tipperary’s Aidan Flaherty and Alan Bradshaw they came off second best.
The south Kilkenny pair won the first set 21-19. However, they were unable to keep up the momentum.
The Munster champions levelled when winning the second set 21-12.
They were in unstoppable form after that and they closed out the match 21-7 in the deciding game.
To complete the action on Sunday the ladies pair of Dearbhail O’Keeffe (Kilfane) and Sorcha Delaney (Clogh) travelled to Nenagh to play local duo, Eleanor Percy and Sile Spain in a junior B doubles contest.
This resulted in a win for the Tipperary duo, who progressed when winning in two sets, 21-17, 21-2.
Junior Nationals
On Saturday the qualifying fixtures for the 4-wall junior nationals will be played at venues up and down the country.
Already through to the nationals are a number of the seeded Kilkenny players.
Along with the qualifiers from this weekend, the seeded players will compete at the nationals which will be staged in Tyrone and Monaghan on weekend May 11/12.
Hardball
The closing date for entries for the All-Ireland hardball championships is this Friday, April 19.
Matches are scheduled to commence on Saturday May 4.