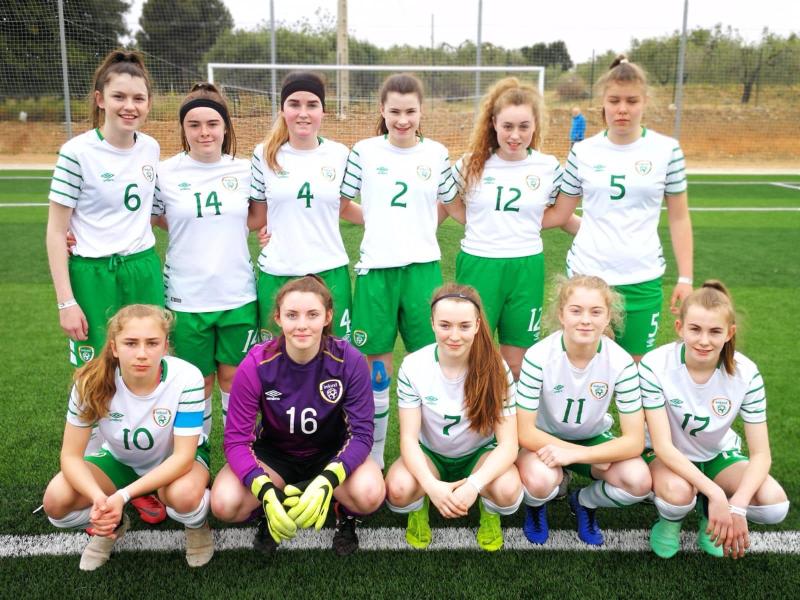 A series of top class performances from a trio of Kilkenny players helped the Republic of Ireland's under-15 girls team retain the Bob Docherty Cup.

Captain Ellen Molloy (Presentation SS) and Freya De Mange (Presentation) were on target as the Girls in Green beat Gibraltar 4-1 in Salou on Wednesday to seal the silverware.

Molloy and De Mange, who play for Thomastown United and Freebooters, were joined by another Freebooters player Amy Clifford (Loreto Kilkenny) in the squad that jetted off to Spain for the international tournament at the weekend.

All three Kilkenny girls played a major part in Ireland's successful campaign, which kicked off with a 2-0 win over Scotland on Monday.

They were back in action on Tuesday, beating England on penalties to capture the John Read Cup. The game finished 1-1, but Ireland prevailed 5-3 on spot kicks, Molloy among the scorers.

The team wrapped up a brilliant week with the 4-1 win over Gibraltar, a game in which both Molloy and DeMange were on the scoresheet.

A goal down at half-time, Ireland stormed ahead with two quickfire strikes from sub Áine Walsh. Molloy cut down the left channel to slot home Ireland’s third before De Mange, also a second half sub, fired the ball over the head of the Gibraltar keeper to make it 4-1 with seven minutes remaining.

The result saw Ireland pip both Wales and Northern Ireland to the spoils after both teams ended their game with a point apiece following a 2-2 draw. Northern Ireland won the penalty shoot-out, earning a bonus point, but it wasn't enough to catch the Republic of Ireland.