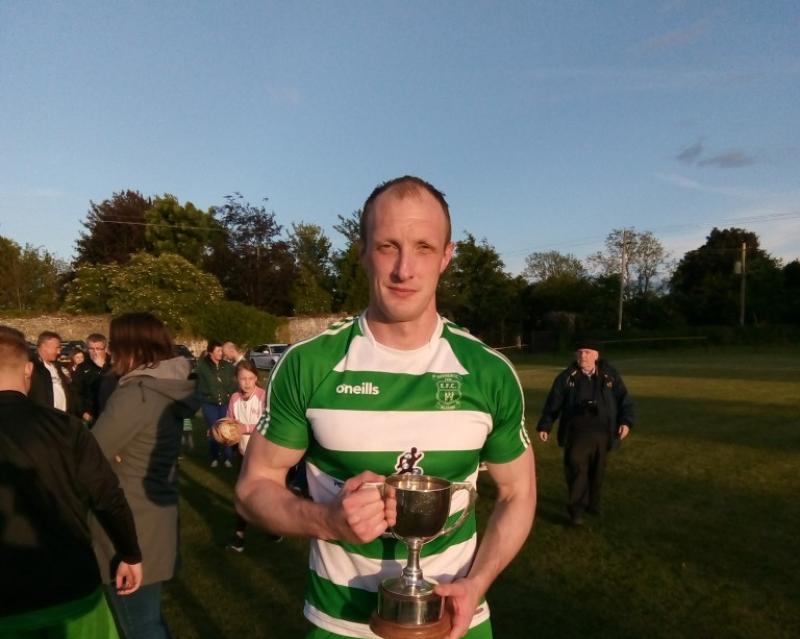 Sean Barcoe with the McCalmont Cup

Evergreen captain, Sean Barcoe, was the leader in every sense and he scored the only goal of the game that earned them victory over Fort Rangers in the McCalmont Cup final in Derdimus this evening.

Barcoe struck in the 11th minute, his firm downward header beating goalie Jim Nugent all ends up, after an inviting cross from the right wing by full-back, Tommy Earls.

At the time the ’Green were in full flow, and there was a danger Fort would be wiped out. Earlier Barcoe got in behind the losers defence, but from a tight angle he could only force a corner, and on 10 minutes ’keeper Nugent saved well from Jamie Owens.

After conceding, the losers slowly but surely got a hold of the game. Eddie Nugent blasted a shot wide and a dangerous free kick from Dylan Dunphy-Wallace was turned out for a corner.

Evergreen were in control, however, with Lee Delaney and Niall Andrews command in the centre of their defence, but their early dash faded.

Fort were defiant and hard working throughout the second half, but they rarely threatened to derail Evergreen’s league/cup double bid and what was an 16th McCalmont Cup victory.