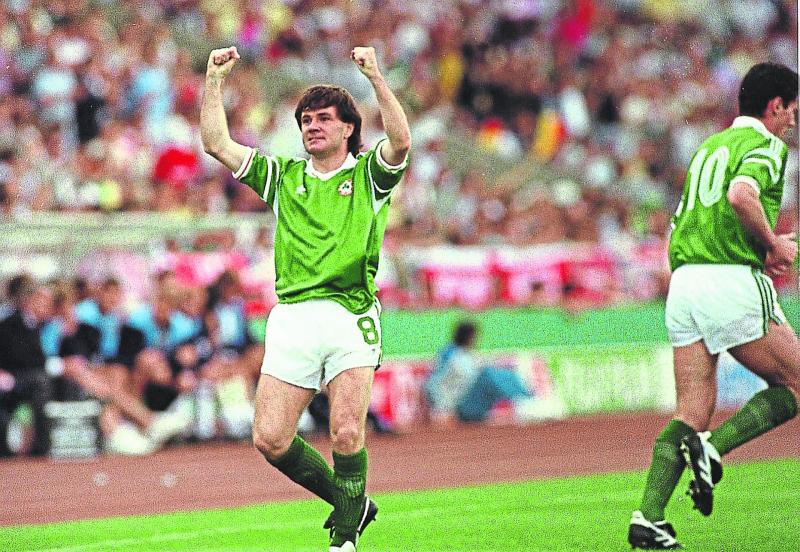 Last night I dreamt I went to Orlando again. Was it really a quarter of a century ago?
Can so much time have passed so quickly? It feels like just the other day that we were watching poor Steve Staunton being boiled alive under the Florida sun. It feels like just the other day that I was being introduced to the dubious delights of Bud Light and Coors Light. Ugh.
No complaints otherwise, mind. A bunch of us spent the most wonderful three weeks in the US in the summer of 1994. Supporting Ireland at Euro ’88 and Italia ’90 had been an adventure but attritional: trains and cheap hotels and, because we didn’t have the money for anything better, indifferent food.
Supporting them at USA ’94 was a pleasure from beginning to end, not least because of the hospitality of our host in Hazlet, New Jersey: Mike O’Neill, formerly of Patrick Street in Kilkenny. I came home having put on weight.
Hazlet being our base meant that New York, which I’d never visited before, was a commuter train ride away. The morning before the Italy game we went into the city and ran into the victory parade for the New York Rangers, the newly crowned Stanley Cup champions.

Yes indeed: the Rangers had a homecoming and we stopped to gawk on our way to the World Trade Centre, where from the top the people down on the street looked “just like ants”.
World Power
The following afternoon we were in Giants Stadium. Italy 0, Ray Houghton 1. At long last, in their third major finals, it was Ireland’s first victory over a proper world soccer power.

You know, a country that regularly reached and won World Cup and European finals. On those criteria the win against England in Stuttgart in 1988, exhilarating as it was, hadn’t really counted.
Unfortunately things went downhill rapidly from there. We took a 22-hour train to Orlando to see Ireland being outplayed by Mexico; we took the train back for the 0-0 draw with Norway in Giants Stadium, a grim and horrible spectacle; and it was back to Orlando again, this time by plane, for the round of 16 on Independence Day when Holland had far too much guile and skill for us.
The Florida heat? I still think too much was made of it. On arriving in Orlando first time around we ran into Michael Lanigan, eminent Kilkenny solicitor and musico and soccer head, who’d got there earlier and had attended the Belgium versus Holland match.

Both teams, he said, had gone out on the field early to warm up and get acclimatised to the heat.
Ireland did the opposite and Staunton wore a cap during the preliminaries. Much good it did them or him.

And here was the irony: it had been hotter, or at any rate more humid, in Giants Stadium for the Italy game. Orlando’s was a dry heat that was easier to cope with.
Puff Chests Out
Predictably the tournament was brilliantly organised, with the Americans embracing “sawker” for the month. What was also important was the opportunity it gave Irish people and people of Irish descent to puff their chests out.
One night in Orlando we encountered a guy in his 20s who’d travelled from Wisconsin or Indiana or somewhere.

How “Irish” he was I’m not sure he said; probably fourth or fifth generation. But he did go so far as to declare that if Ireland came up against the US he’d “probably be cheering for Ireland” – quite a mouthful for an American, regardless of how proud of their ancestral heritage they may be.
The Holland game took place on a Monday. By Thursday afternoon I was back home. Kilkenny were out of the championship and I spent the rest of the summer boring people with my tales of USA ’94.
I still am.