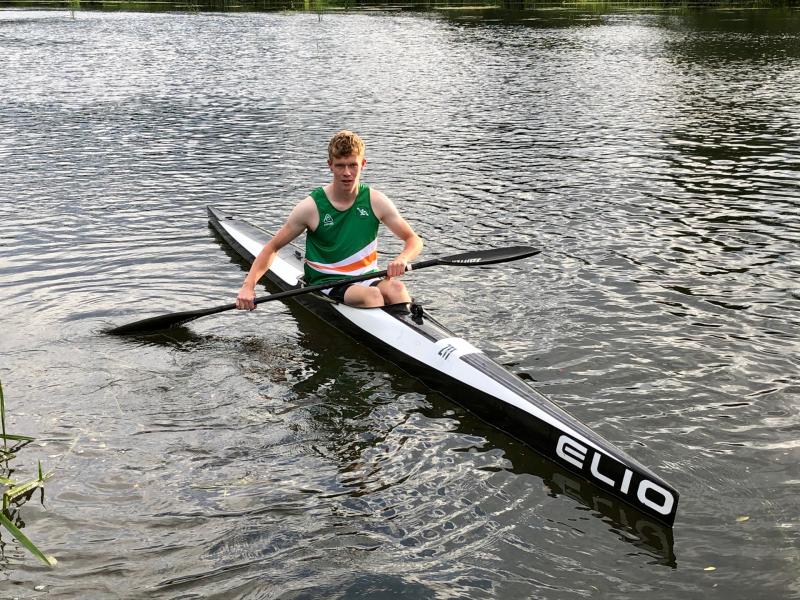 Senan Forristal, a young Kilkennyman who is making waves on the canoeing scene at home and abroad, tells Trevor Spillane about his life on the water

A Kilkenny teenager is all set to take to the water and test himself against athletes from all over the world.

For 17-year-old Senan Forristal, this week marks the start of a busy season on the water. Forristal, a member of the Thomastown Paddlers Canoe Club, will be in Decize, France for the European Marathon Championships.

It will be a proud day for Forristal, who lines up with Nathan Devine in the junior doubles event on Friday. The latest chapter in the Paddlers success story, there was never any danger of his sporting life going any other way.

“I got into canoeing through my brothers,” he said. “I have three brothers - Eamon, Anthony and Paul - all older than me, who were canoeing from an early age so it became something of a tradition for me to get into the sport.

“They taught me about canoeing,” he said. “They used to bring me paddling, so that kicked it all off.”

Having a club so close to home was a huge factor in giving the Forristals a life on the water.

“It’s great to have such facilities on our doorstep,” said Senan. “There’s flat water, rapids, everything you could want.”

And he has taken to it - well, like a duck to water. That said, there has been plenty of hard work and dedication along the way.

“There are days when you wouldn’t feel like going out, days in the cold weather and early mornings in winter-time,” he admitted, “but when you get places that’s when you know it’s all worth it.”

And Forristal has certainly been getting places. As an under-16 he won the Junior class in the Liffey Descent and took gold at the Sella Descent in Spain.

“Things have gone my way recently,” was his modest reply. “I’ve come into a bit of form but I’ve been training hard and it was a good time to happen.

“It took a lot of hard work, but hopefully I’ll be able to continue the success.”

A sporting life can take you places and while still young, Forristal has already pocketed some good memories from his time in the water.

“The highlight would have to be the Sella,” he said of the race in Spain. “I loved the race in general; the conditions meant the water was very like the water we have in Thomastown – shallow and fast – so I loved the speed of it.

“The whole commotion of the event was something else,” he added. “It takes a lot of determination to get through it, what with all the other paddlers. It’s a very enjoyable race.”

“There’s over a thousand people in the race all going off at one time, packing together on the river,” he said. “It’s hard to get going but once you do it’s a great race.

“It’s all about getting a fast start – it’s a race you start on foot so if you mess up or get off slowly you could have 500 people to get past. You could capsize five or six times at the start of the race before you get going because of the volume of people heading into the water.

“A fast start is the most important thing, followed by keeping up that pace for the remainder of the race.”

From that point of view it was a thrill to participate in the race - to medal was something else.

“It’s an incredible event to participate in,” said Senan. “You have so many more competitors than you’d have in a race at home – my division had 50 in it last year, whereas you might only have 10 in a race here. It’s a much bigger occasion and, with all the festivities surrounding it, it’s a great event.

“During the winter I do a lot of gymwork, strengthening up for the summer. In the summer it’s nearly all work on the river, coupled with a little running to keep the fitness up.”

And trying to combine that with schoolwork – Forristal is a student at St Kieran’s College – makes for a testing time.

“It can be tough, but when you train in the evenings it keeps you disciplined,” he said. “When you combine it with your schoolwork it helps your focus.”

That focus was key to helping Forristal claim his place in the Irish team for the European Championships.

“There was a selection race at the end of May up in Belfast,” he recalled. “Based on my results there I was picked for the Irish team.”

“I was delighted,” he said of the huge achievement. “It was great to be selected and know you would represent your country.”

It’s worth noting that Forristal was injured before the selection event. A combination of overtraining and growing pains meant he wasn’t sure about going forward for the event but he was encouraged to go for it by a few of his clubmates.

Forristal, who has been busy training with doubles partner Nathan Devine in Kildare as well as working at home, has also secured a place on another international trip.

Since the selection event in Belfast he raced in the Irish national championships, which doubled as a selection race for the World Championships in China in October. Forristal beat Devine in that race and has been selected to compete for Ireland in the singles category. As the trip would be self-funded, he will wait and see whether that competition will become a reality.

“We don’t get much in the way of funding,” Forristal said by way of financial support for canoeing. “We have to pay our way for events, but I do it for the love of the sport. It’s great to be fit and feel you can go out on the river and give your all.”
For now, France is the target. Whether it brings a medal or not remains to be seen, but for Forristal there are modest goals in his sights.

“I want to go out and give a decent performance,” he said. “That’s my goal.”