Eoin Murphy: "We need our A-game to have chance against Limerick" 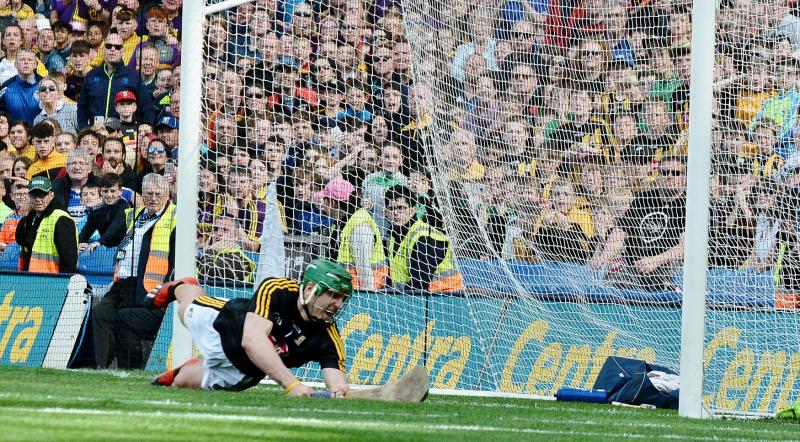 Kilkenny hit season high form during the second half of the All-Ireland quarter-final win over Cork, but they will have to drive way beyond that to deal with the might of All-Ireland champions, Limerick.
Smarter and better use of the ball are a must, All-Star goalie, Eoin Murphy, suggested when throwing an eye towards Saturday’s intriguing clash against the current National League and All-Ireland champions in Croke Park.
“Our second half form against Cork was very good, but when you are playing teams like Limerick who waste very little, you are talking about a different level again,” the ever smiling Glenmore goalie insisted.
Limit Limerick
“Our scoring percentage needs to go through the roof against them, and obviously we have to try and limit Limerick in terms of the chances they have been able to create.
“In the two biggest tests they had this year, the League final and Munster final, they stood up and performed. That take doing.
“The amount of chances they created was very impressive. There is real confidence in their play, and the way they set-up makes it hard to break them.
“Look, we have had a good few games now. We need to go at them from the first minute. We can’t wait for the second half because they will have us blown out of the water by then if we do.”
Murphy literally limped into the season when he broke a bone in his left leg and he spent weeks on crutches.
The initial diagnosis of the damaged was grim and suggested six to 10 weeks would be the recovery time.
The Leinster championship was out, it was suggested.
The 29-year-old simply put his head down and worked on his recovery. He got back weeks ahead of schedule and played in the drawn tie against Wexford in the last Round Robin game.
An easy ‘first ball’ which he had to gather yards from goal, and which he knew gave him time for a recovery if he messed up, was snapped up and driven down field.
Murphy knew instantly that he was back; his game was up and running again. He was right and ready for any campaign.
A defeat to Wexford followed in the Leinster final, but Murphy and friends in the Kilkenny camp put that setback behind them quickly.
“Our big lesson from that day was that we must make better use of the ball,” was Eoin’s take when he reviewed that match.
“Wexford have their way of setting up their team, and it is not easy to play against them.
“Our use of the ball, from myself up to No. 15, has to be better next time. We will have to be clinical.
“Limerick will have bodies there, and if you are not exact they will be on you in a shot.
Fine Tuned
“We have to be fine tuned. We weren’t against Wexford. There were a couple of periods when we created a few more chances than them, but we weren’t taking them. Limerick won’t give away a lot of scoring chances.”
From the throw-in at the start of every season Kilkenny want to try and win everything; the Walsh Cup, the National League, the Leinster championship and the All-Ireland.
“If things don’t work out along the way, you have to park the disappointment quickly,” Eoin insisted. “Games come around so quickly now. If you dwell on a previous defeat you are lost.
“You have to look at the positives and see what you have to try and do to get things right for the next game.
“If you have to use the ball better; if you are taking bad options, things like that.
“Obviously you have to be trying to improve. You can’t dwell on negatives. You try and learn for setbacks, and I think we have this season.”
The Cats suffered defeats against Galway and Wexford in the championship, but they have well and truly put them behind them.
“We lost the Leinster final, but we have moved on quickly,” he insisted.
“With all due respect to Leinster and everything, the All-Ireland final is what you dream about as a young lad. For 70-plus minutes Limerick are going to be in our way trying to end our dream.
“We have to bring our A-game to Croke Park because they are not All-Ireland and League champions for no reason. We have to make it a battle. Nothing but a new high level of performance will do if we are to survive.”