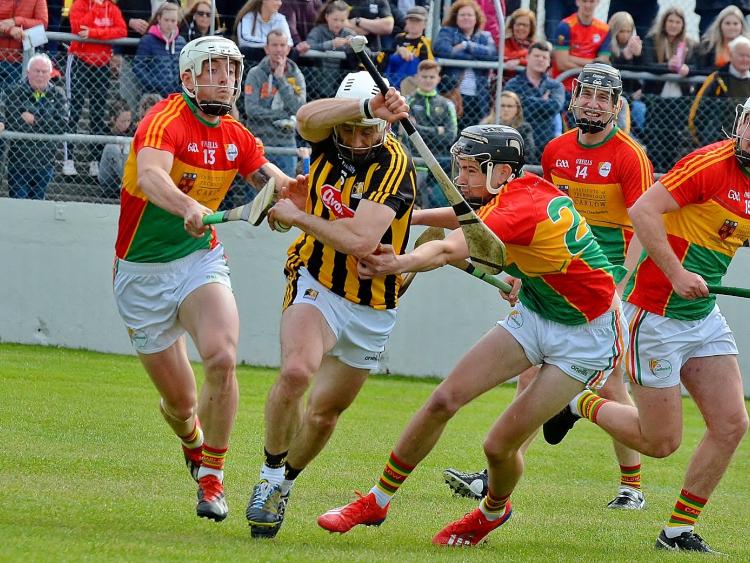 Conor Fogarty (centre) was in deadly form during the third quarter

All action Erin’s Own (Castlecomer) let rip early in the second half and shot 2-4 during a blistering eight minute spell to take charge of this first round senior hurling championship, relegation semi-final in Clara this evening.

Bennettsbridge, last year’s losing finalists against Ballyhale Shamrocks, now face a battle against the drop back to the intermediate grade after what could be described as a systems failure during the closing half. They had a player red carded in the 45th minute.

Most of the damage was done by then, however. The winners turned into the second half to face the breeze 1-9 to 2-7 behind.

Within 90 seconds the roles were reversed after Conor Fogarty, who turned in a fantastic third quarter, and Michael Murphy threw over points for the winners. The ’Bridge got back level through Jason Cleere with a lovely score from midfield, but then the game began to run away from them.

Conor Fogarty pointed another free. Michael Murphy pointed, with an assist from Fogarty. In the 37th minute Fogarty was at the end of a zippy three man move to shoot a goal, and when Murphy added a like score from a 38th minute penalty the gap was suddenly a yawning 3-13 to 2-9.

Fogarty continued to pile on the pressure, and he shot another minor from a free before the ’Bridge had a man sent off. The losers shot a mere two points during the closing half, which didn’t look on the cards at all at the rest.

The losers played well against the elements, when goals from the ever dangerous Liam Blanchfield (7th minute) and the excellent Jason Cleere from a penalty (23rd minute) helped them into the lead at the break.

Erin’s Own shot out of the traps in the new half, and before they knew what hit them, the ’Bridge were fighting a losing battle.