It will be the final curtain for the softball season 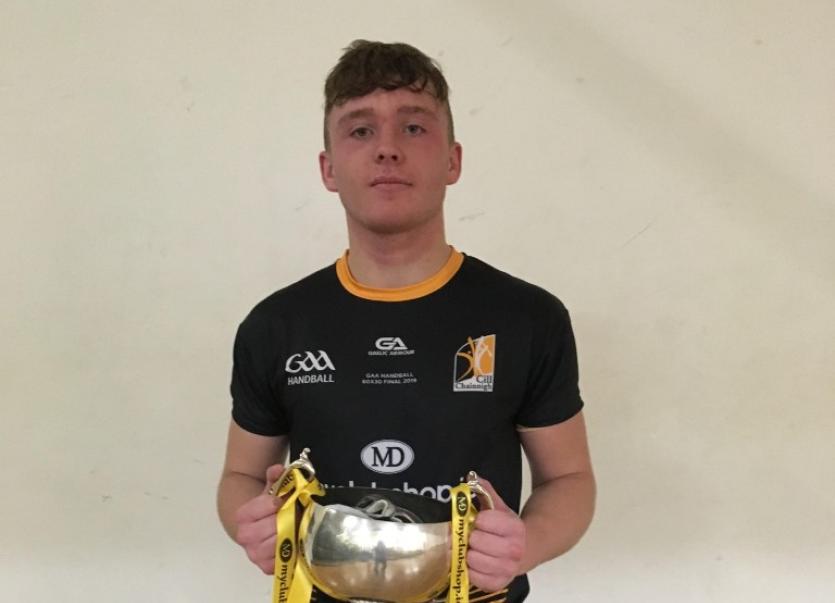 This weekend the curtain comes down on the softball handball season with the completion of the remaining All-Ireland finals in the adult grades.
The juvenile semi-finals were completed on Sunday and the finals will be played on weekend of October 5/6.
In what will be the last fixtures programme at the Croke Park centre on Saturday, the county will be involved in two of the three finals to be decided.
First up are the Clogh pair of Kyle Dunne and Billy O’Neill. They contest the minor doubles final against Monaghan’s Eoghan McGinnity and Tiernan O’Rourke.
In the recent singles decider Kyle came out on top in a three set thriller against McGinnity. He will hope to maintain this form going into this contest.
Along with him is the experienced Billy O’Neill, who is the defending champion, having won this title last year with fellow club mate Ciaran Cooney.
This match has all the makings of a top class clash with the Kilkenny boys hoping to bring another title back to their club.
The second match on the day will also feature a Clogh player. Shane Dunne contests the intermediate single final against Ryan Mullan from Tyrone.
Like his younger brother, Shane will be seeking his second All-Ireland this year in the grade.
Two weeks ago Shane and Keith Bourke (O’Loughlin’s) were victorious in the doubles decider against Galway.
This will be a tough test for the Clogh player because the northerner is a fair performer.
The final match on the programme is the senior doubles contest between defending champions Meath and near neighbours Westmeath, who are contesting their first final at this level.
Kilkenny have already won one All-Ireland doubles championship. They claimed the Diamond Masters B crown in Kilfane on Sunday.
In what was a rescheduled match, Gerry Murphy (Kilfane) and John Maguire (Galmoy) claimed the honours when defeating Monaghan’s Peter Owen Fealey and James Fealey 21-5, 20-21, 21-3.
This is the second title for Gerry this season. He won the singles championship in recent weeks.
To complete Kilkenny’s involvement in the All-Ireland adult series, the ladies junior B doubles final will bee played in Clonmel on Sunday. Here Windgap pair, Margaret Purcell and Caoimhe O’Shea play Aishling Shanahan and Ciara McCarthy, Limerick.
Ladies
On Saturday in Croke Park the Kilkenny pair of Ciara Mahon (Clogh) and Aoife Holden (Kilfane) lost to the dominant Cork duo, Catriona Casey and Aishling O’Keeffe.
This was the third successive defeat against the Munster pair, who claimed their 7th All-Ireland Open doubles title in-a-row when winning 21-12, 21-7.
Juveniles
On Sunday the All-Ireland juvenile semi-finals between Leinster and Munster were played in Cullen, County Cork and Broadford in Limerick.
At the Cork venue the results were mixed in the three matches the county contested.
In boys under-16 singles Billy Drennan (Galmoy) continued on his winning way when accounting for Rory Grace (Tipperary) 21-11, 21-1.
There was also a victory for Conor Holden (Kilfane) in boys under-15 singles. He defeated Hayden Supple (Cork) 6-15, 15-10, 15-12.
In boys under-15 doubles Luke Flanagan (Clogh) and Joe Healy (Kilfane) were beaten by Eoghan Daly/John Cronin(Cork) 15-8, 15-4, and in boys under-16 doubles Kyle Jordan/Sean O’Keeffe (Kilfane) were beaten by Cork, Gearoid Healy/Kealan Murphy 21-6, 21-15.
At the Limerick venue Kilkenny contested two semi-finals against Clare and Tipperary.
In girls under-16 singles Amy Brennan (Clogh) came out on the right side in a three game thriller with Chloe Philpott (Clare) to reach the final.
In boys under-17 singles, Tom Carroll (Talbot’s Inch) lost to Patrick Delaney (Tipperary) to end his hopes in the championship.
Saturday: doubles finals in Croke Park (12 noon) minor final, Kilkenny (K. Dunne/B. O’Neill) v Monaghan (E. McGinnity/T. O’Rourke); intermediate final, Kilkenny (Shane Dunne) v Tyrone (Ryan Mullan); men’s final, Meath (B. Carroll/G. McConnell) v Westmeath (R. McCarthy/C. Jordan).
Sunday in Clonmel, Tipperary (5pm) LJBD Kilkenny (Margaret Purcell/Caoimhe O’Shea) v Limerick (Aishling Shanahan/Ciara McCarthy).