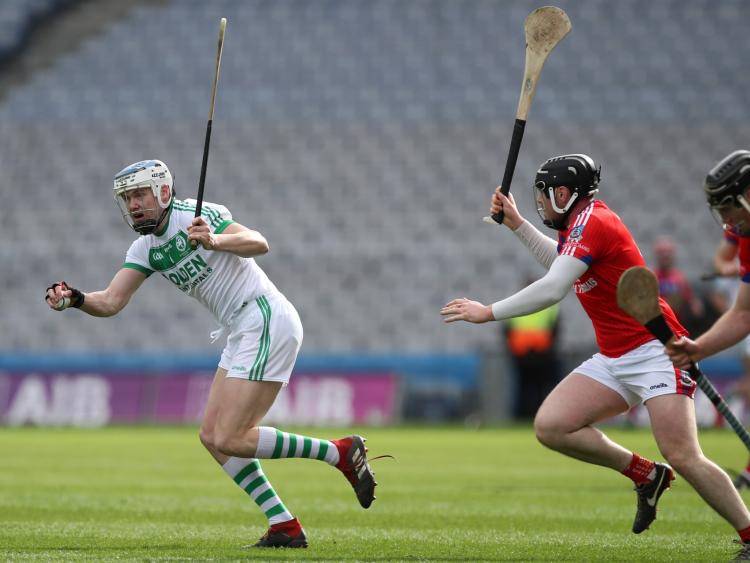 TJ Reid (left), his ankle injury could be a big problem for Shamrocks

Kilkenny captain, TJ Reid, is a serious doubt for defending senior hurling champions, Ballyhale Shamrocks for the upcoming championship quarter-final.
The local and All-Ireland champions are booked for a meeting with Clara in Nowlan Park on Saturday week (5pm), but it is far from certain that the free scoring Reid will be available.
The flying attacker, who scored a whopping 5-83 for Kilkenny during the Leinster and All-Ireland championship run, injured his left ankle in Sunday’s easy first round victory over St Patrick’s (Ballyragget).
TJ was sent for an MRI scan on Monday, but at the time of going to press the extent of the injury had not been confirmed.
Reid picked up the injury just before half time and he received treatment on the pitch.
He was withdrawn almost immediately. He hobbled up the sideline to the Shamrocks dug-out after the break, and he spent the second half there.
However, Reid was still struggling badly on the ankle after the match.
The loss of the 31-year-old would be immense, especially as former All-Ireland winning captain and current Offaly manager, Michael Fennelly is struggling to regain match fitness.
Fennelly hasn’t played with Shamrocks this season, but he was togged out and was part of the squad on Sunday.
The eight times All-Ireland medal winner was a late starter in last year’s championship.
He returned for the quarter-final clash against Dicksboro and he was a dynamic force afterwards, enjoying magnificent campaigns in Leinster and the All-Ireland series.
Shamrocks, as All-Ireland champs, will head the double quarter-final bill at Nowlan Park on Saturday week, which will be featured by RTE television.
The opening game on the programme will be between newly crowned League champions, Dicksboro, and Erin’s Own (Castlecomer) at 3pm.
A third quarter-final will be played the same afternoon in Danesfort (1pm). That is between O’Loughlin Gaels and either Mullinavat or Graigue-Ballycallan.
The latter pair drew at the weekend. The replay will be in Callan on Sunday (11.30am).
The fourth senior quarter-final has been fixed for Sunday week in Thomastown - Rower-Inistioge versus James Stephens (12 noon).
The semi-finals will be played on Sunday, October 13 with the final on October 27.
The relegation final between Bennettsbridge and St Patrick’s has been fixed for Sunday week in Clara (2pm).
This is an intermediate championship quarter-final weekend.
The semi-finals will follow on Saturday, October 12 with the county final on October 27.
The junior county final will be played on Sunday, October 20.