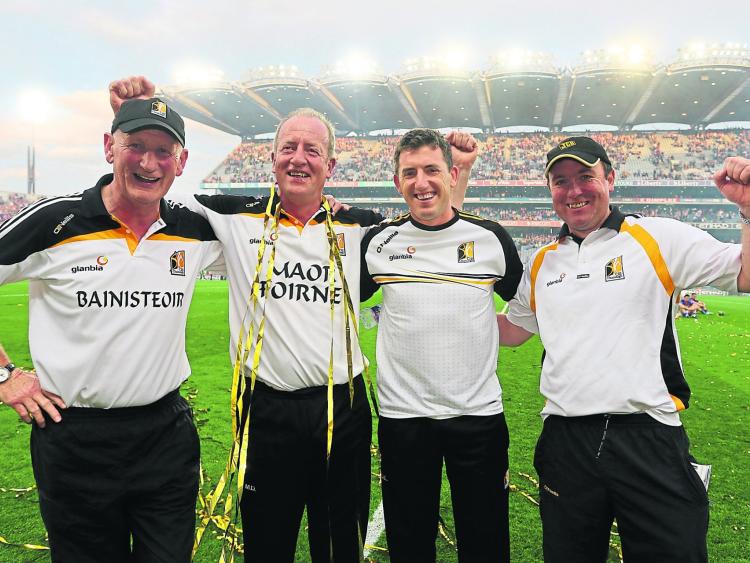 Derek Lyng (second from right) with the Kilkenny senior selectors

The Kilkenny GAA merry-go-round was in full swing this week and it looks like big changes are on the way with a number of teams.
Six times All-Ireland senior medal winner and senior selector since 2014, Derek Lyng l0oks set for a new role.
While nothing has been confirmed yet, the Emeralds (Urlingford) clubman looks set to stand down as a senior selector.
And his new post will be as manager of the Kilkenny under-20 team, a position vacated by former great, DJ Carey some weeks ago.
The County Board hasn’t ratified or confirmed any changes, and won’t do so for a few weeks, but big moves are afoot.
Last night the Camogie Board confirmed the appointment of O’Loughlin Gaels clubman, Brian Dowling as manager of the Kilkenny senior camogie team.
Dowling takes over from 12 times All-Ireland medal winner, Ann Downey, who stepped down after the recent O’Duffy Cup final defeat against Galway.
Dowling will be joined by Tommy Shefflin (Ballyhale Shamrocks) and Ray Challoner (Thomastown) and the rest of the Selection Committee will be finalised shortly.
The Lyng move would be an interesting one.
While senior manager, Brian Cody, hasn’t given any indication of his plans, in this case no news is being read as good news and he looks set to stay on.
The departure of Lyng means his backroom team will change, however, and strong speculation would suggest there will be more than one change.
Derek Lyng joined the Kilkenny senior squad as a player in 2001. He retired after the 2009 All-Ireland final having made 32 championship appearances.
Sources suggest he was keen to work with an under-age team, and it looks like he will get his wish.
Meanwhile, that priceless production, the weekend match programme will grow to a biggest to date size of 28 pages this weekend.
At €2 per copy it represents super value.