Eoin Larkin puts pen to paper and tells it all 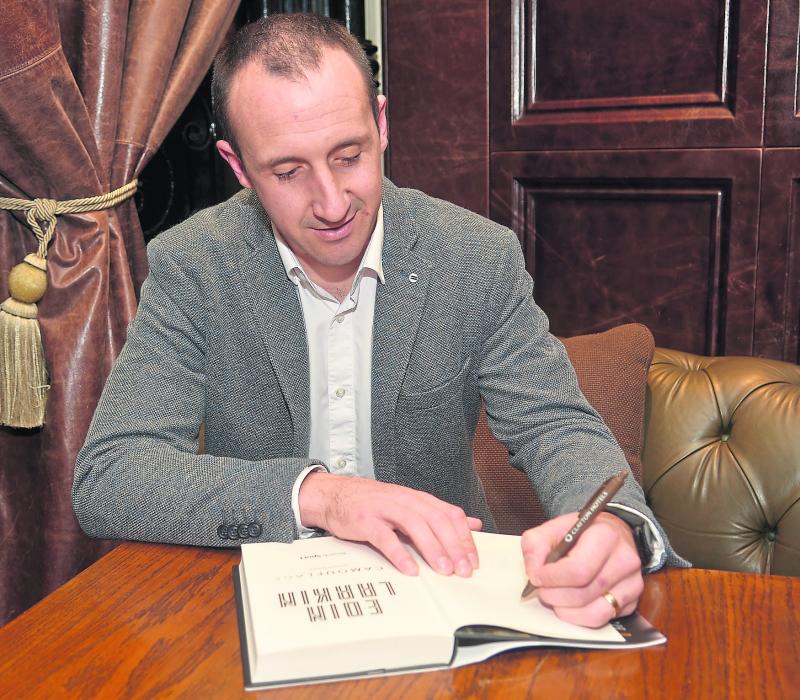 Eoin Larkin signing a copy of his book Camouflage

One approaches the latest autobiography of a Kilkenny hurler with a certain and unavoidable degree of ennui. What can he tell us that we don’t already know?
We’ve seen all the matches of the past two decades and had them rehashed to within an inch of their lives, so there can be little new on that count.
We know that the player will not come bearing tales from the dressing room; the omerta holds much too strong for that. Nor is he likely to diss the boss man, and in any case he’s been beaten to the punch in that regard.
So how will a new Kilkenny opus differentiate itself?
Easy. By being Eoin Larkin’s autobiography, Camouflage.
The book is cleverly structured in order to set it apart from your normal GAA memoir. Rather than being organised chronologically or thematically it skips around both from chapter to chapter and within the chapters themselves. In doing so it covers a myriad of subjects without exhausting the reader’s patience. This is not an easy trick to pull off but Larkin and his ghostwriter, Tullamore man Pat Nolan of the Irish Daily Mirror, have managed it brilliantly.
Then there’s the big reveal, which materialises halfway through and is introduced almost casually. Larkin has suffered from depression for a number of years and at one stage toyed with the idea of suicide.
Though he’s much better now, he doesn’t sugar the pill. “Ultimately it’s down to the individual to conclude that they have a problem. They need those around them to see it too and take the appropriate steps. Simply having a chat won’t fix it.”
A self-termed “high-functioning depressive” during Kilkenny’s glory years, Larkin will make a terrific intercounty selector in due course. His insights are shrewd and inarguable.
Tommy Walsh was a brilliant hurler but JJ Delaney was a better defender. Cha Fitzpatrick was “probably just a victim of the game moving in a different direction”. On Henry Shefflin: “When you add everything up there was no one better than him.” And he nails Richie Power perfectly: the most talented of the lot of them, except that “he loved hurling but just wasn’t a fan of training”.
Larkin saw the county’s slow decline at first hand. Up to 2011 the standard of the training games in Nowlan Park was off the scale. “After that it slowly started to dip and that used to frustrate me greatly,” to such an extent that it contributed to his state of mind. Picking Kilkenny up after 2013 to win the next two All-Irelands “with almost a patched up side” was, he – correctly – insists, Cody’s greatest feat. As for the rivalry with Tipperary, these were “brilliant games to be involved in. You knew what you were going to get and that you had to be at your very best.”
Larkin has a way with a pungent one-liner. To wit:
“It took us a couple of years to realise he [Mick Dempsey] was quite competent and another couple to surmise he was excellent.”
“There’s no compulsion to commit to an inter-county panel so you may as well do it right once you do.”
On Cork: “To us they were full of shit.”
“I can’t stand O’Loughlin Gaels.” He he. Good job Ballyhale won last Sunday, huh?
Elsewhere there’s some nice, affectionate stuff about his “unconventional” family and his dad, my good friend Allen Larkin; he’s interesting on his army days; and he emphasises the importance of a good education. Kids, make sure to do your Leaving Cert! He didn’t and regretted it.
Due to its themes and structure, Camouflage could easily have missed its mark. In the hands of Larkin and Pat Nolan it is, thankfully, a triumph.