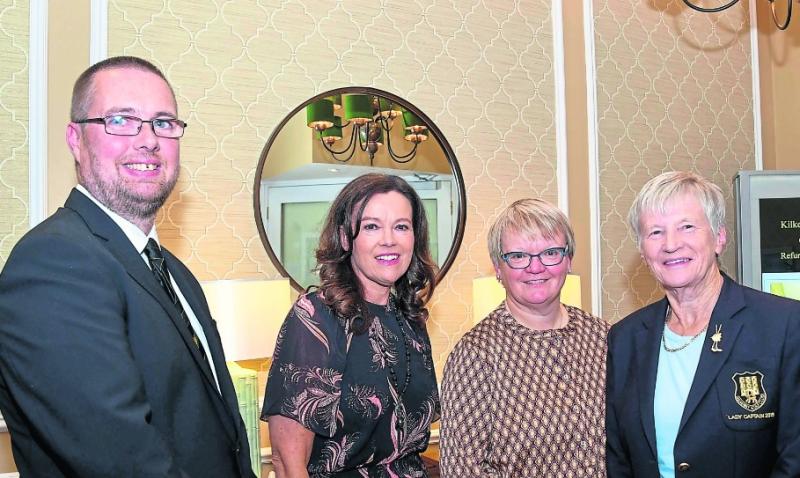 It was a proud moment for Kilkenny Golf Club as they officially opened their newly refurbished clubhouse.
The opening was a big success, with more than 100 members attending the ceremonial function.
The refurbishment consists of an upgraded and revamped main lobby, bar and catering area together with new and refurbished seating, tables and lighting.
Captain of Kilkenny Golf Club, Mark Grant, remarked that the refurbishment has created a modern, bright, relaxing and welcoming facility.
The improvements will not only be welcomed by the club’s members, but also the numerous golf societies who come to the club each year, as well as golfers from all parts of Ireland, overseas and members of the general public.
The welcoming atmosphere, achieved by the club’s interior designer, saw the use of booth seating with areas screened off. The colours were chosen to enhance this warm inviting feeling.
The plaid carpet was custom made for the club while, in the lobby, the wall panels were fitted with inset wallpaper detail that provides an air of elegance and light.
Kilkenny Golf Club has one of the best parkland golf courses in Ireland and with this refurbishment they will have also one of the finest bar, catering and leisure facilities of any club in the country.
Kilkenny Golf Club has a fascinating history. The club was formally opened in 1896 at Bishop’s Demesne by Mr. E. Smithwick. Following a number of moves to different locations in the City, the present site at Newtown, Glendine was purchased in 1924.
Originally the club boasted a nine hole course before, in 1938, it was extended to 18 holes. The clubhouse was extended in the 1980s and during this period extra land was acquired and a programme of major improvements to the golf course was planned and successfully implemented in the subsequent years.
These included the introduction of sand-based greens to all holes, new tee boxes, new bunkers and revisions to fairway layouts.
This summer the club hosted the Irish Men’s Senior Close championship which was held over three days. At the conclusion of the championship the Golfing Union of Ireland, in its praise of the course, stated that the quality of the greens was of national and PGA standard.
Kilkenny GC has over 1,200 members and with the present investment in the clubhouse facilities, together with its continuous programme of course improvements, the future of the club has never looked healthier.
Grow into future
Mr Grant thanked all the people throughout Kilkenny who have helped the club develop over the years and looked forward to the club continuing to grow into the future.
Together with Ladies Captain, Eithne Murphy, he thanked everybody associated with the work including Hélène Broderick Interiors, Kilkenny; the various contractors and suppliers, the majority of whom are from the county; Annette Stapleton, Project Leader for the club; the management committee and the staff of the club.
Kilkenny Golf Club has a range of membership options for new members, including full and intermediate membership. For more see kilkennygolfclub.com.