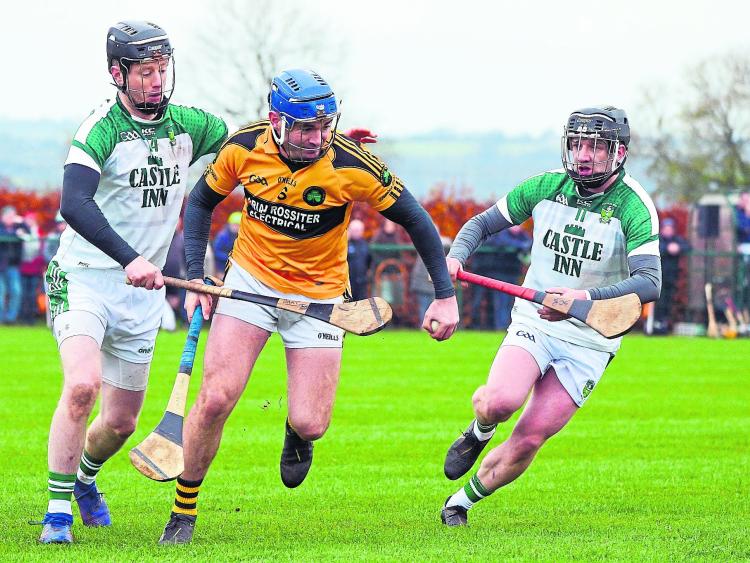 Brian Healy (centre) has enjoyed a good season with Conahy

The honour of representing Kilkenny is an inspiring force as Conahy Shamrocks bid for Leinster hurling honours.
The northerners were beaten in the county junior championship final by O’Loughlin Gaels. However, because the St John’s Park outfit were not, under rule, allowed carry the colours in the provincial championship because they were a second team from a club, the honour fell to Conahy.
“Honour and respect come with representing Kilkenny, and we aim to do the very best we can in the championship,” insisted Conahy manager, Paul Buggy as they prepare for a Leinster final shoot-out with Ballygarrett Réalt Na Mara (Wexford) in Enniscorthy on Saturday (1.30pm).
Conahy will be chasing their second Leinster junior title - they won it as Kilkenny champions in 2007 - and they are going all out for victory.
“It was like we gained a new lease of life in the Leinster championship,” Mr Buggy continued in reference to two victories to date. “The mood after the county final was hard to gauge, to see how the players would react.
“We had two weeks to recover after that before going into action in Leinster. That allowed the players time to try and get back and re-focus. The county final was disappointing. We have no complaints. We were beaten by a better team on the day.
“In fairness, the player got down to business quickly. They are representing Kilkenny now, and that comes with respect. You have to respect what you are doing. The boys have taken on the fact we are representing Kilkenny.”
The manager, who is joined on the sideline by Diarmuid Healy, Brian Rossiter and Kevin Healy, insisted Conahy were determined to go as far as they can in the championship.
He felt the fact the club qualified for the provincial final reflected well on the quality of junior hurling in Kilkenny, seeing that they weren’t the champions.
“Getting to the final shows there is good character in the players,” the manager continued. “They are good young players. They got up and started again very quickly. We are delighted with the way they have responded after the county final defeat.
“Now they have to be a little bit selfish. They have to try and get something for themselves from the season. That is the way we are playing it - be selfish; go hard at it and try and win something for yourself.”
The mood in the camp was good, he felt. No one was looking back or feeling sorry. Hurling life now was all about the bright possibilities that lie ahead.
The Slaneyside opposition he described as “big, physically strong team and able to hurl” and they expected nothing soft.
Star attacker, James Bergin, who missed the last two matches, has no more than a 50/50 chance of playing as he bids to recover from a hamstring injury. Another forward, Darragh Dooley, is nursing a sprained ankle.
“We are working off a small panel, so it is not easy,” Mr Buggy said. “We have a team that can do a job on any given day, so we are hopeful. I see great spirit among the lads. They are young. They are enthusiastic. They are learning.
“They are an excellent group to train. It is easy work with those tools, to try and get the best out of lads who want to play and improve. There is a good future for this group as long as they stay at it and work hard.”
Conahy panel - Padraic Delaney, Simon Callinan, Davy Healy, Liam Cass, Darren Cuddihy, Donal Brennan, Brian Healy, Kieran Mooney, Ed Delaney, Eoin Cahill, John Mullan, Tom Phelan, Darragh Dooley, James Bergin, Tom Rice, Karl Downey, Alan Healy, Tom Nolan, Ollie Feehan, Sean Brennan, Michael Bergin, Bill Murphy, David Kennedy, Paddy Mullan, Gary Dunne, Eoin Carroll, Frank Gunner, Cian Harding, Padraigh Gunner, Donal Cass, Shane Brennan, Kieran Delaney, Justin Brophy, Nicky Feehan.