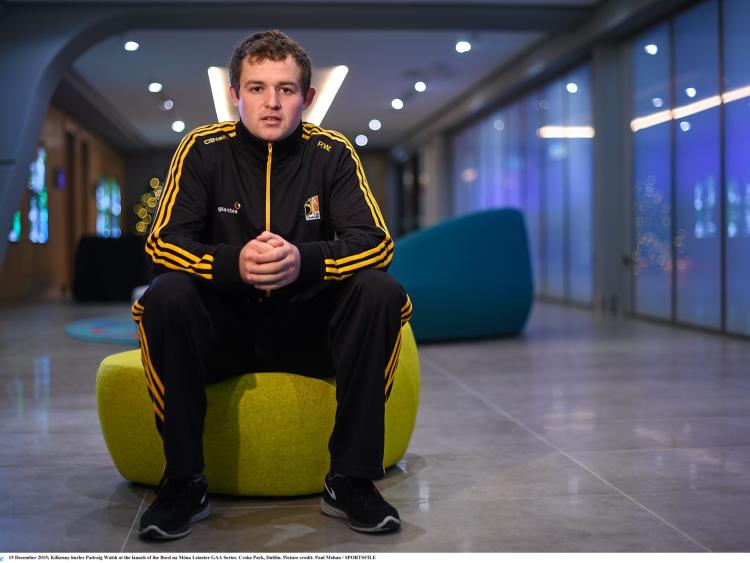 Padraig Walsh has been enjoying a great season with Tullaroan

Tullaroan are the oldest GAA club in Kilkenny. The club was founded in 1884, the same year as the Gaelic Athletic Association.
Tullaroan currently lead the Roll of Honour in the senior hurling championship with 20 title wins, but still the players of today are trailblazers.
In modern times Tullaroan have never contested a Leinster final. On Saturday at Kilkenny’s own Nowlan Park in the provincial club intermediate hurling championship, the men of today will be bidding to put the famous name in lights against Seir Kieran (Offaly).
“It is a great opportunity,” insisted Tullaroan manager, Jimmy Coogan, as he and fellow selectors, Damien Cleere, Liam Keoghan, Peter Dukelow and David Buggy bid to put a winning combination together to face Seir Kieran (Offaly).
“Things are going well,” insisted a happy Mr Coogan after wins in Leinster over Rosenallis (Laois) and Naas (Kildare) were added to a great victory in the county final. “We are delighted to be where we are and we are looking forward to Saturday.”
Winning the county final, after the pain of five defeats in finals in recent years, gave the players a good shot of confidence.
“In other years there were ifs, buts and maybes and talk if we had done this or that things could have been different,” Mr Coogan recalled. “Now there are no question marks.
Feel-Good Factor
“Everyone, the players and the parish, are all looking forward. There is a real feel good factor around. Hopefully we can keep that going.”
He was not one bit surprised by the togetherness and excitement the journey in Leinster has generated because that was Tullaroan, a “great parish”. No matter what was going on, everyone rowed in behind the effort.
However, in the case of hurling, passions might run even deeper.
On Saturday the parish priest, Fr Patsy Guilfoyle retired. He was given a huge send off by grateful parishioners.
“That is the way things are here,” Mr Coogan insisted. “The parish came out and said thanks.”
The former club stalwart and senior All-Ireland medal winner said it was “super” to be part of what was going on in Tullaroan. Everyone appeared to be going around with a smile on their face.
“The reality of the situation is that you are only as good as your last game, so Saturday has to be taken on,” he said when adding a touch of reality.
Tullaroan admitted they didn’t know an awful lot about opponents, Seir Kieran. Their opponents were a force in Offaly hurling, but they dropped out of the senior grade last term.
Seir Kieran bounced back at the first attempt, and now they too are on the verge of taking provincial honours.
“They are obviously very good,” Mr Coogan surmised. “It is going to be a big test, a different kind of test to what we faced against Rosenallis and Naas.”
Management have been pleased with the way the squad has been performing. The team hurled well against Naas last time out, but Mr Coogan reckoned there was still more in the squad.
“We played well on the day,” he said. “We are happy with the way we are playing, but now we have to drive on. A lot of lads are in the age bracket from 18 to 23. For me they have matured in the last year or so.
“A year in hurling can make a huge difference. Some of them have come of age as adult hurlers. In other years they may not have been the main men, but now they are stepping up to the mark for us.
Important
“That has been important in our development and progress. You have to be out to improve all the time. Even though we have been going well, I think there is more in us.
“On different days different players have been stepping up. I don’t think we have had the day when everyone was at their peak together. That is the ultimate goal. That is the performance every team is looking for.
“The further you advance in this competition the better you have to play. Saturday will be step up time again for us.”
He didn’t make much of the fact Tullaroan would enjoy the benefit of home venue in UPMC Nowlan Park, even if they have good memories from the place.
“You still have to perform,” he insisted. “The performance is everything. There are no question marks. We are looking ahead with a positive attitude.”
Management are hoping that Kilkenny panelist, Martin Keoghan, who suffered a bad knee injury against Naas, will be fit. The odds are stacked against him, however.
“He is a top class hurler, a very important player for us,” Mr Coogan insisted. “If he is out, he will be a massive loss. In saying that, injuries have been with us all season. We had two or three lads missing in every game, so it has stretched our panel. Thankfully our subs have always answered the call.”
Ger Luby, a long serving corner-back, had surgery on his knee and he won’t feature. Richie Maher has an ankle injury and is still struggling too.
“To date we couldn’t have asked for any more from the players,” the manager went on. “That is not just the case this season. It has been the case every year.
“That has been the hallmark of our performances. We give everything on the pitch. Things didn’t always work out for us, but there was never a lack of effort. You can’t ask for more than.”
He said to climb to the top in Leinster would be a massive for the players and club.
“Everything is upbeat and positive,” Mr Coogan insisted. “The whole parish is on a high. We face a big test, and hopefully we can keep things going.”