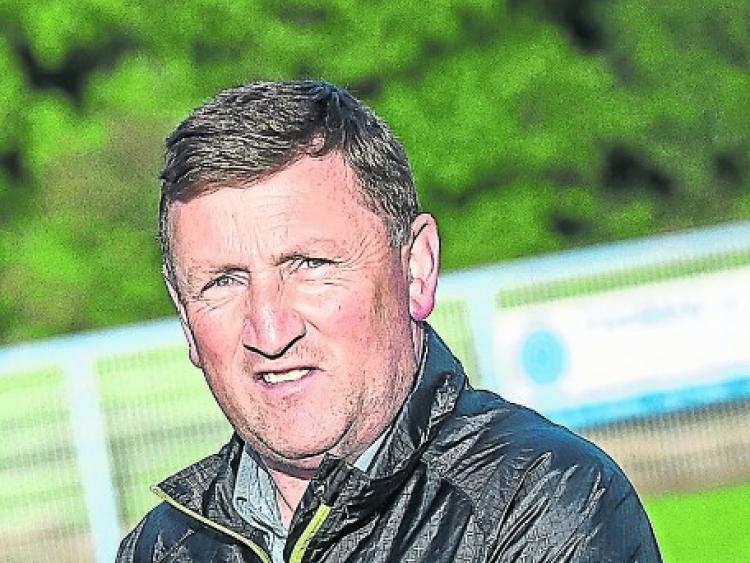 Kilkenny GAA clubs can forget about a quick fix being found to alleviate the logjam in fixtures at the height of the playing season.
It just ain’t going to happen, warns County Board secretary, Conor Denieffe, in his annual report which he will deliver to County Board Convention in the O’Loughlin Gaels centre on Monday night.
And the secretary also warns that the survival of the existing Kilkenny format for League/Championships could be at risk.
“There is no doubt but that the issue of club fixtures continues to cause the most dissatisfaction in Kilkenny, and in many other counties nationally,” the O’Loughlin Gaels clubman opens when tackling a situation that has infuriated clubs because they are left without meaningful matches during the height of the playing season.
Better situation
He reminds that this year Kilkenny managed to play two rounds of their own League/Championship in April and one in May during the Leinster championship Round Robin series.
While he feels this was a better situation than pertained in 2018, there is still a long gap between Rounds three and four and the championship then had to be run off over six weeks in order to have teams ready to participate in Leinster club championships.
While people are awaiting the report of the Fixtures Review Committee set up by President John Horan, Mr Denieffe expresses a cautionary note in relation to this report.
“Firstly, any changes to National Fixtures, if they come, are unlikely to be implemented in 2020 since the Master Fixture list is already in place,” he points out.
“Secondly, and not to prejudge the report, but unless a window is created during July/August for club games I cannot see any great improvement in the club fixtures situation.
“Kilkenny’s motion to put back the All-Ireland into September would have allowed for this solution.”
He says it is a pity a number of prominent hurling counties did not support the motion at Congress last year. 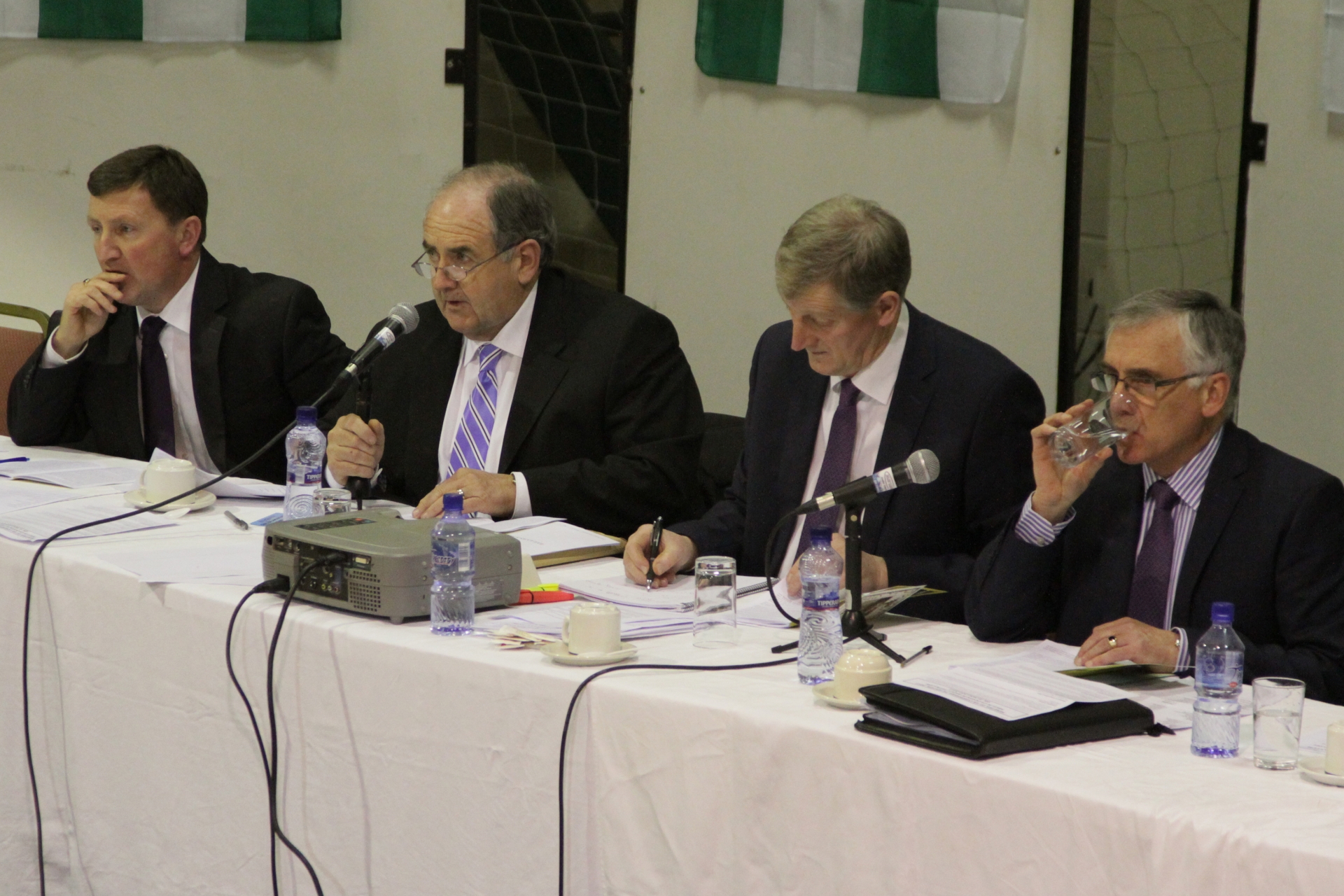 Kilkenny County Board treasurer, Barry Hickey (right) will have good news for delegates

“One other issue that is a concern is the move to play the entire provincial and All-Ireland club championships in the same calendar year,” the secretary continues.
He points out that next year the proposed first round dates for Leinster club championships are - senior hurling quarter-finals on November 1, intermediate and junior hurling first round on October 17 and quarter-finals on October 31.
“One can see immediately that we will be under pressure to have our own championships completed in time to have Leinster club representatives,” Mr Denieffe insists.
And then he issues a stark warning!
“At a minimum, it seems finish on the day will be required for all of our championship games,” he asserts.
“Going forward into the years after 2020 if the dates for Leinster championship and All-Ireland club championship continue to be brought forward with no relief in relation to inter-county fixtures then we may be left with no option but to either change from our current League/Championship system or not have club representatives in the provincial or All-Ireland competitions.”
He is firmly of the view that the current system of two six team groups playing five rounds of game before the knock-out championship games commence is an excellent system and the envy of many of Kilkenny’s neighbours.
Loath to change
“I would be loath to change from it,” the secretary continues.
“One can only hope the Fixtures Review Group report can help bring relief to club fixtures.”
There is at least one area of good news to be reported, the secretary says.
Treasurer Barry Hickey’s financial report to Convention again shows an excess of income over expenditure.
The excess is in the region of €200,000.
In addition to all of the usual costs incurred there were also exceptional costs involved in maintaining facilities and completing the new drainage and irrigation systems in UPMC Nowlan Park.
“In all, the total turnover for the year was in the region of €3.8 million with ticket sales included,” Mr Denieffe points out.
He says the contribution made by the Hurlers Co-Op draw is critical to both the clubs and county.
So too is the support of Glanbia, O’Neills, UPMC, Energise Sport and Elverys and all of the local sponsors.
Season Ticket and Club Plus tickets sales are reduced, but they are still a significant income stream.
“With plans for further infrastructure developments such as the new gym in MWH Centre Dunmore it is essential to maintain other income opportunities from events such as big games in Nowlan Park and concerts,” the secretary insists.
At this stage every club is well aware of the importance of insurance cover for all activities, Mr Denieffe warns, before going on to spell out a few reminders.
This includes insurance for property, Public Liability, hirers and Players Injury Benefit.
In 2019, he continues, once again insurance premium costs increased significantly.
Increase in claims
This was caused by a deteriorating claims experience and an increase in the number of claims being pursued against GAA units and the increased cost associated with managing these claims.
“Once again I would remind clubs that it is essential they maintain a watchful and responsible look out for potential risks,” he continues.
“In this way premiums can be kept down and the trauma of a claim and the loadings that can accrue can be eliminated.”
With this in mind clubs should always ensure competent planners and contractors are used on all new builds and maintenance work.
It is also essential that excluded or prohibited activities do not take place on club property and that all non-GAA users of meetings rooms, indoor halls, function rooms, bars playing fields, walkways, playgrounds, all-weather facilities and gyms have their own insurance in place and that they can produce it.
“If any doubt exists, it is essential to have cover verified by our insurers,” the secretary warns.
The National Insurance Committee carried out Risk Assessments on a number of Kilkenny clubs again this year and in doing so provided valuable advice in an attempt to reduce insurance risks.
“The County Safety Officer is always available to assist clubs in the provision of Safety Statements and Risk Assessments,” he reminds.
The log of the facilities in each club in the county enables a pro rata spread of the premium based on facilities and risks.
“Clubs should ensure this list is up to date and all additions or alterations to facilities need to be notified to Nowlan Park to ensure all areas are properly covered,” he concludes.