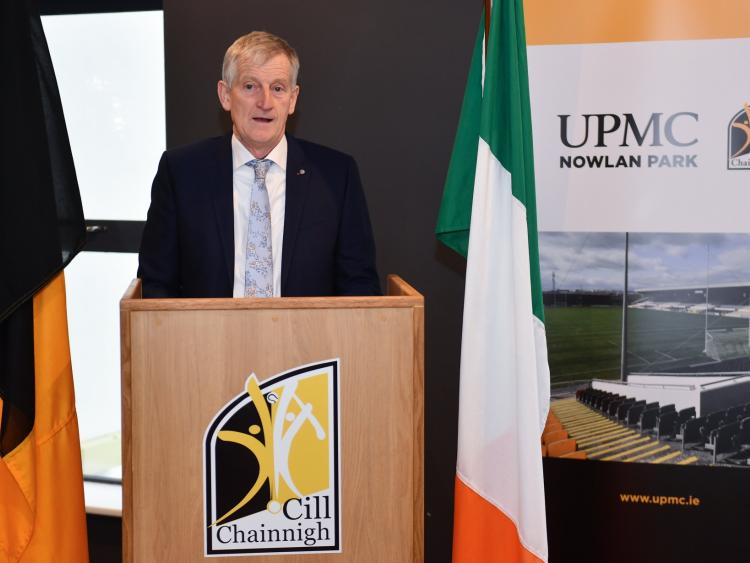 The Kilkenny GAA/UPMC (University of Pittsburgh Medical Centre) partnership can help drive the county onto bigger and better things, County Board chairman, Jimmy Walsh, insisted.
“We are delighted to commence our 10 year partnership with UPMC and we look forward to breaking new grounds in improving player welfare, injury prevention and health and wellness through education, the provision of the most modern technology and training systems available,” he said at the official launch of the partnership deal in UPMC Nowlan Park.
The Windgap official said all the work listed was currently being done by improving the Kilkenny gym and medical facilities.
“In addition,” he said of the new deal, “it will help us in retaining our pitch and stadium at the current Pitch of the Year levels for our players, patrons and Development Squads.
“It will also help improve our support for our sister associations in ladies football, handball and camogie by providing a facility that every club in the county and beyond will benefit from.”
Sport, he continued, was a common thread between Kilkenny GAA and UPMC, who support the Pittsburgh Steelers American football and Penguins ice hockey sides, who, incidentally, have black and amber/yellow as their club colours.
Mr Walsh said that since hurling and Irish games were honoured by UNESCO as part of the world’s heritage, stories have emerged that the early Irish emigrants played hurling on the frozen North American lakes, and this led to ice hockey coming into being.
“The football connection is for another day,” he smiled.
“As we officially launch UPMC Nowlan Park we celebrate an ideal partnership between the top sporting venue and the leading worldwide medical institution,” he suggested. “Both are to the forefront and at the cutting edge of their respective fields.”
For so many, Nowlan Park, now UPMC Nowlan Park, was the modern day ‘Castle’, ‘Cathedral’ of Kilkenny.
“I will say it quietly; we are proud to say it is also the home to the most successful hurling county, players and teams ever,” he pointed out.
He saw it as a place many love to visit, and opponents dread, knowing it as a challenging place to try and get a result.
Field of Dreams
“For our young people it is their Field of Dreams,” he felt. “Many a club or school playing career is measured on getting to play here, with the ultimate dream of being a winner on county final day where top class performances provide greater opportunities to go forward to a higher level.
“Its tradition was created by playing legends, supporters, volunteers and administrators and in particular through the life times, vision and work from the time of James Nowlan and his successors. What we have today bears testament to this.”
Mr Walsh thanked all involved in getting the deal done. He praised UPMC chief, David Beirne, who played his part with both his club Dicksboro, in the black and amber with Kilkenny teams and he has now brought the Kilkenny GAA link to a new level with UPMC.
The chairman also thanked County Board treasurer, Barry Hickey for his great work in cementing this new found friendship cum partnership.
Mr Walsh suggested people will see the cream of the sporting and entertainment world line out in UPMC Nowlan Park in the future.
“The door is always open for events,” the chairman insisted.
“By 2029 we may have the Rugby World Cup. However, today as we celebrate the renaming partnership we all look forward to the icing on the cake when Eoin (Murphy), Cillian (Buckley) and Brian (Cody) return here for an All-Ireland senior hurling champions homecoming.”
All those named were among the attendance at the press conference.