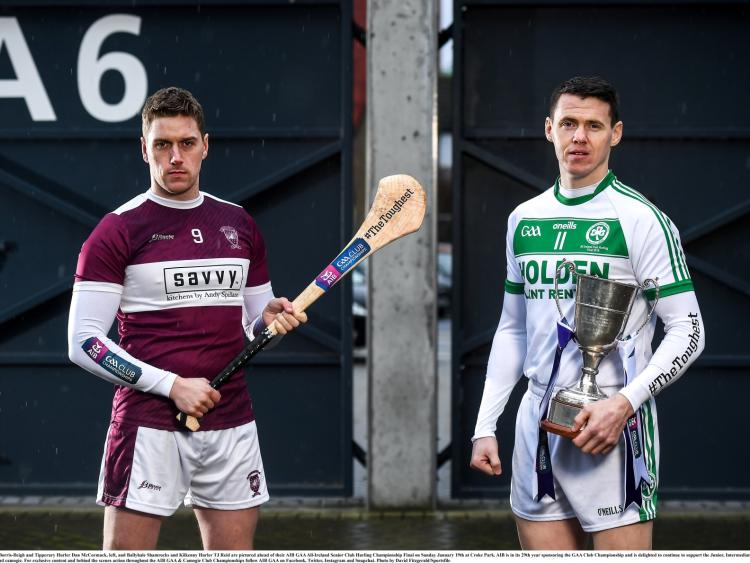 TJ Reid (right) is a huge player for Shamrocks

Of course senior All-Ireland hurling finals involving Kilkenny are the big, big ones, but a weekend in which three county champions contest national deciders comes a close second.
Sure where would you get it? Only in Kilkenny!
Intermediate champions, Tullaroan and Conahy Shamrocks, the junior championship runners-up, will be hoping to turn Croke Park into an arena of celebration on Saturday.
And 24 hours later the biggest winners of club hurling honours in the All-Ireland senior championship, Shamrocks from Ballyhale, will be bidding to extend their lead at the top of the Roll of Honour as they chase an eight national victory, and what for them would be a first two in-a-row.
So much to look forward to and enjoy. Sure you couldn’t but feel a part of it. That is the peculiar Kilkenny way too.
We all love to see our own doing well, being successful. Hurling is a shared passion; the success of neighbours a shared feeling.
Back in 2011 Kilkenny were at this point too, with three teams in the club finals. Lady Luck turned her back on O’Loughlin Gaels (senior), Dicksboro (intermediate) and John Lockes of Callan (junior) that day and all came home empty-handed.
The hope is for better things this time.
Shamrocks have a super record in this championship, however. They have already contested eight finals, losing one, their first against the then big hitters Blackrock (Cork).
It has been success, success all the way since for the small parish with the free flowing hurling well from which talent gushes with ease. Their manager, Henry Shefflin, a proud product of the club who was challenged by injury during a distinguished career, made an indelible mark in his time.
His take of 10 All-Ireland senior hurling winners medals is the greatest in the 136 year history of the GAA. He has forever insisted he got a lot from the club.
Now he is giving back big time, having steered Shamrocks into new fertile territory where they followed a Kilkenny championship win the season after an All-Ireland success.
Now a shot at reaching a new milestone for the club - putting All-Ireland wins together.
Shamrocks face the best of Tipperary and Munster in Borris-Ileigh, who won this championship once back in 1987. They are a mighty brigade, driving by that classy hurler, Brendan Maher, plus elegant and determined players like Dan McCormack, a high achiever in the county colours, his brothers Sean and Ray, along with Conor Kenny, Paddy Stapleton and so on.
It is almost as if Borris-Ileigh are on a crusade, turning heartache in the parish into a positive, unifying force for the area.
Shamrocks know the power of such emotion; how it can fortify and lift and drive people on to extraordinary deeds. They are facing a storm, no doubt.
Shamrocks are a force themselves. They have the gift of invention, being able to turn near impossible situations into big gains, victories.
TJ Reid, a man born to lead and lead, is a giant of a hurler in every sense. He is brave. He has physique. He has touch. He can score. And he rounds all that off with a healthy work-rate. TJ doesn’t leave the labouring in tight matches to others. He gets stuck in!
All-Star Colin Fennelly, a powerfully built full-forward with pace to burn, is another potential destroyer for Shamrocks. He has helped dig the team out of a few tight corners this season and last.
His game, his effectiveness within the team, is growing season on season. When the ball is in hand he sees nothing but the goal.
Neither bone nor ash frighten him when he catches sight of the target. Powerful, fast, straight line running. Goal, goal, goal appears to be the way he thinks. Padraig Walsh is a huge player for Tullaroan

With the majestic Michael Fennelly at the heart of the defence - he puts his battered and patched up body through all sorts of hardship - Shamrocks have an unreal power source that helps drive others, gifted youngsters like Evan Shefflin, Ronan Corcoran, Eoin Cody and, of course, Adrian and Darren Mullen.
Full-back Joey Holden is a serious performer too, the one who can launch a deadly counter attack with a simple, well placed hand-pass. Because of his easy style and efficiency, some of his most telling work often goes unnoticed. He is a serious bit of gear. Believe it!
Shamrocks are in a good place heading into this All-Ireland final. Borris-Ileigh are thinking the same about themselves.
The first Kilkenny v Tipperary All-Ireland senior club final is full of promise. Hurling will be the winner, no doubt about it.
Tullaroan is a name forever linked with hurling. The Walshs’ - there are seven of them - plus the Keoghans’, Buggy, Maher and so on have a level of goodwill on their side the likes of which has rarely been seen. Opponents Fr O’Neills from Cork won’t care. They are out to spoil the party.
Tullaroan have grown and grown during this championship. Their darling, former All-Star, Tommy Walsh, has enjoyed such a rush of goals since the Kilkenny semi-finals that he could be described as the Messi of hurling.
He plays the game with the enthusiasm of a young boy. He carries himself like a gentleman. He is no stranger to Croke Park. If Tullaroan need a leader, his hand will be first up, and it will be highest too.
The Kilkenny champions have a great chance here. O’Neills had two players suspended this week following incidents in the semi-final. They have the right of appeal.
It doesn’t matter. If Tullaroan show the same start to finish determined attitude that marked their semi-final victory over Naomh Eanna (Antrim) then they will be hard to beat.
Conahy Shamrocks will contest the junior final against Russell Rovers (Cork) having lost the Kilkenny county final against O’Loughlin Gaels. They are chasing a second junior crown, having tasted success in 2008.
The way Conahy have turned bitter disappointment in the county final into a success in Leinster and a real possibility in the All-Ireland final reflects massively on the players and team officials. They face a very tough task, the most difficult by some distance of what they have taken on to date.
Conahy have to believe. If they can put the best they have to offer out there, then anything is possible.
The panels
Shamrocks - Dean Mason, Darragh Corcoran, Joey Holden, Darren Mullen, Evan Shefflin, Michael Fennelly (capt), Brian Butler, Ronan Corcoran, Conor Phelan, Adrian Mullen, Brian Cody, TJ Reid, Eoin Reid, Colin Fennelly, Eoin Cody, Mark Gorman, Richie Reid, Gavin Butler, Patrick Hearne, Joseph Cuddihy, Mark Aylward, Conor Walsh, Patrick Mullen, Eoin Kenneally, Kevin Mullen, Casey Corcoran, Martin Davis, Patrick Doyle, Enda Kenneally, Jason Devereux.
Tullaroan - Paul Buggy, Diarmuid Doheny, Tommy Walsh (Village), Stephen Maher, Martin Walsh, Padraig Walsh, Jack Keoghan, Tomás Dunne, Mark Walsh, Bill Gaffney, Martin Keoghan, John Walton, Shane Walsh (capt), Tommy Walsh, Peter Walsh, Tom Fitzgerald, Ger Luby, Ken Coogan, Stephen Dowling, Dylan Simpson, Adam Tallis, Jim Moore, Shane Cuddihy, John Maher, Liam Teehan, Gavin Joyce, Sean Cuddihy, Tommy Walton, Joe Coughlan, Joe Norton.
Conahy Shamrocks - Padraic Delaney, Simon Callinan, Davy Healy, Liam Cass, Darren Cuddihy, Brian Healy, Eoin Carroll, Donal Brennan, Eddie Delaney, Kieran Mooney, John Mullan, Eoin Cahill, James Bergin (capt), Tom Phelan, Bill Murphy, Karl Downey, Alan Healy, Tom Rice, Tom Nolan, Sean Brennan, Michael Bergin, Dara Dooley, Padraig Gunner, Frank Gunner, Cian Harding, Justin Brophy, Donal Cass, Kieran Delaney, Andy O’Keeffe, Shane Brennan.