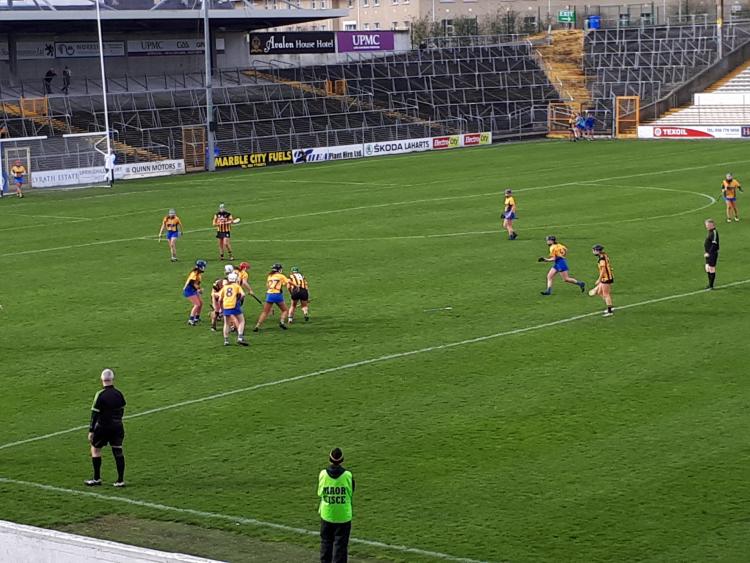 A 47th minute goal from Áine O’Loughlin proved all important in the end when Clare beat Kilkenny in the second round of the Littlewoods Ireland senior Camogie League in UPMC Nowlan Park today.

That score put the brakes on a strong run by Kilkenny which had produced points for Danielle Morrissey and Denise Gaule after the break to reduce the divide to the minimum (0-6 to 0-5).

However, when O’Loughlin scored the goal it put Clare back in the driving seat, although they needed late points from the excellent Gretta Hickey and their star performer, Eimear Kelly to get  them over the line.

The first half featured two disallowed goals. The first was from a penalty by Denise Gaule when the referee ruled that she had broken the 20 metre line when striking the ball.

In the second case a long range shot from the right wing by Maire McGrath saw the sliotar end up in the Kilkenny net, but this time the effort was ruled out because a player infringed on the square.

Apart from that, the action was close, and the tackling tenacious. Early on Clare’s lone scorer during the first half, Eimear Kelly shot a point but that was answered by Katie Nolan in the seventh minute following a good run by Colette Dormer.

The home side hit the front in the 12th minute when Michaela Kenneally picked up a stray pass by a Clare defender before shooting over the bar.

The incident involving the Kilkenny disallowed Kilkenny goal followed in the 22nd minute. The penalty was awarded following a foul on Miriam Walsh.

Breeze backed Clare had four scores from Eimear Kelly during this half to lead by 0-4 to 0-2 at the break.

Kilkenny ripped into action after the change of ends, and they were going well until they conceded the goal. There was a long way to go after that, but the Cats just couldn’t save the day.