Being the better team with most possession doesn't count, it the goals scored 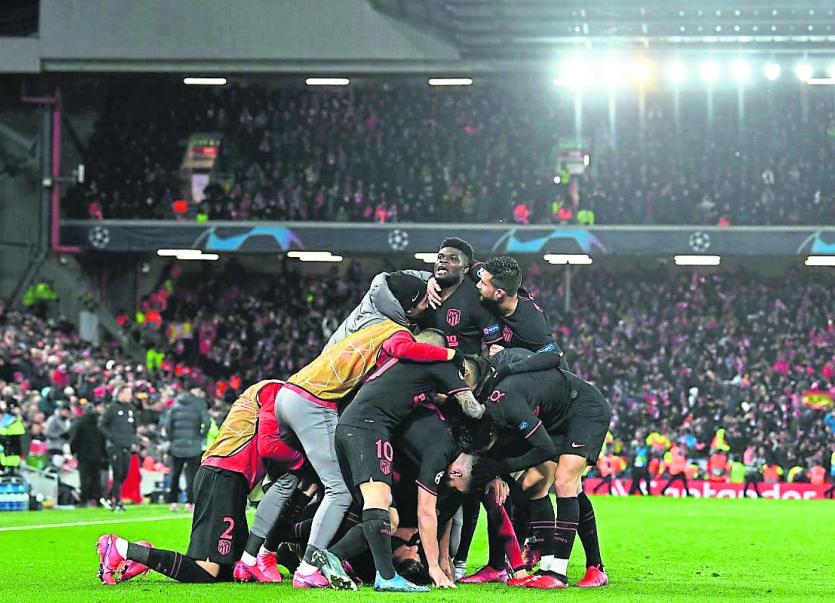 When you win you don’t do everything right and when you lose you don’t do everything wrong - Mickey Harte.
No National League quarter-finals to mull over this week so let’s talk existentialism instead. Sporting existentialism. Our jumping-off point is Anfield last Wednesday.
In case you missed it Liverpool, chasing a 1-0 deficit from the first leg, pummelled Atletico Madrid for the entirety of the 90 minutes, at the end of which they led 1-0, and for the opening few minutes of extra time, after which they led 2-0.
Then the roof fell in. Atletico scored three goals at the other end and progressed to the Champions League quarter-finals on a 4-2 aggregate scoreline.
So much happened over the course of the 120 minutes that it’s hard to know where to start and where to finish. But Jonathan Wilson in the Guardian neatly summed up some of the contradictions of a crazy night.
“It is possible to play quite well in a game and still lose. It is possible to fail to win a couple of things and still be a first-rate coach with a fine team and a functioning philosophy. It is possible to defend exceptionally well and still be quite fortunate to go through.”
Yes to all of this. Fine lines, grey areas and nuances exist, even in the age of Twitter and the 24-hour news cycle, an age when expressing an opinion and expressing it as quickly as possible has become the name of the game. Nay, especially in the age of Twitter, which means it’s more important than ever to look for the fine lines and grey areas.
Did the better team over the course of the tie lose? Patently not. Atletico scored four goals during 210 minutes, three of them in the away leg. Liverpool scored two, none of them in the away leg.
Did the more stylish team over the course of the tie lose? Clearly, but this is an entirely different issue and the two should not be conflated. Why Liverpool were so poor in the first leg, when they failed even to get a shot on target, should have been the real subject of the inquest. This was where the tie was lost.
The post-match interview, when he objected to Atletico’s style of play, was not Jurgen Klopp’s finest moment. Then again, Klopp has had a myriad fine moments since coming to England, so he was more than entitled to an off-night. Some context – that increasingly rare item! - is necessary here. He was upset, he was frustrated, he was speaking in the moment. Who wouldn’t sound a little churlish in the circumstances?
One type of soccer that brings results is not superior to another type of soccer that brings results, although the former may be easier on the eye than the latter. Good defending is an art too. Nor should it be forgotten how both Barcelona and Spain went from being lauded for their tiki-taka (brilliant football! total control!) to being condemned for it (not enough goalmouth action! boring!).
We had a not dissimilar debate in hurling in recent years, with far too many people getting themselves worked up over Derek McGrath and Davy Fitz using seven-man defences. Look: once a team are not transgressing the rules of the game they’re entitled to deploy whatever formation they wish. As Oscar Wilde might have said, either a system works or it doesn’t. That is all.
Yet just to emphasise the extent to which the bottom line colours the narrative, Atletico were widely praised for their supposed “master-class in defending” last Wednesday. This was nonsense.
Theirs was anything but a good defensive performance. Had Diego Simeone been told beforehand that his side would concede 34 shots, 11 of them on target, he’d have been appalled.
We return to that imperishable line of Mickey Harte’s. Sport is not a computer game. It is inexact and messy and frequently governed by the force of circumstance.
Moratorium
If only we could impose a 24-hour moratorium during which everyone was forced to ponder before they pontificated.
Instead the tyranny of deadlines and the itchiness of Twitter fingers demand instant responses – some of them well judged, some of them half-arsed – but all of them made on the hoof and by their nature unconcerned with the bigger picture.
It will only – can only – continue this way. And the grey areas, the fine lines and the nuances will continue to fall through the cracks.